Assembly of the International Space Station

Assembly of the International Space Station 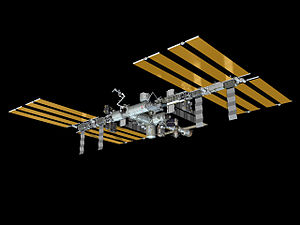 An artist's impression of the International Space Station's configuration as of March 2011.

The assembly of the International Space Station is a major aerospace engineering endeavour being conducted in Low Earth orbit by a consortium of governmental and inter-governmental space agencies.

Zarya, the first ISS module, was launched by a Proton rocket on 20 November 1998. The STS-88 shuttle mission followed two weeks after Zarya was launched, bringing Unity, the first of three node modules, and connecting it to Zarya. This bare 2-module core of the ISS remained unmanned for the next one and a half years, until in July 2000 the Russian module Zvezda was added, allowing a minimum crew of two astronauts or cosmonauts to be on the ISS permanently.

When assembly is complete, the ISS will have a pressurized volume of approximately 1,000 cubic meters, a mass of approximately 400,000 kilograms, approximately 100 kilowatts of power output, a truss 108.4 meters long, modules 74 meters long, and a crew of six. Building the complete station will require more than 40 assembly flights. As of March 2011, 26 Space Shuttle flights have docked with ISS to add elements, and 9 other Shuttle flights have flown logistics-servicing missions to ISS without adding major external elements. These 35 Shuttle missions include 9 SpaceHab and 10 MPLM logistics-servicing missions in various combinations. The last two planned Shuttle flights are due to add one of the two final elements of ISS, followed by one last Proton launch with the planned delivery of the ERA. Other assembly flights have consisted of modules lifted by the Russian Proton rocket or in the case of Pirs and Poisk by a Soyuz-U rocket. 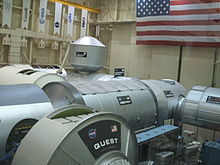 The space station is located in orbit around the Earth at an altitude of approximately 360 km (220 mi), a type of orbit usually termed low Earth orbit (the actual height varies over time by several kilometers due to atmospheric drag and reboosts). It orbits Earth in a period of about 90 minutes; by August 2007 it had completed more than 50,000 orbits since launch of Zarya on 20 November 1998.

A total of 14 main pressurized modules are scheduled to be part of the ISS by its completion date in 2010.[1] A number of smaller pressurized sections will be adjunct to them (Soyuz spacecraft (permanently 2 as lifeboats - 6 months rotations), Progress transporters (2 or more), the Quest and Pirs airlocks, as well as periodically the Multi-Purpose Logistics Module, the Automated Transfer Vehicle and the H-II Transfer Vehicle).

The ISS, when completed, will consist of a set of communicating pressurized modules connected to a truss, on which four large pairs of photovoltaic modules (solar panels) are attached. The pressurized modules and the truss will be perpendicular: the truss spanning from starboard to port and the habitable zone extending on the aft-forward axis. Although during the construction the station attitude may vary, when all four photovoltaic modules are in their definitive position the aft-forward axis will be parallel to the velocity vector.[2]

In addition to the assembly and utilization flights, approximately 30 Progress spacecraft flights are required to provide logistics until 2010. Experimental equipment, fuel and consumables are and will be delivered by all vehicles visiting the ISS: the Shuttle, the Russian Progress, the European ATV and the Japanese HTV. 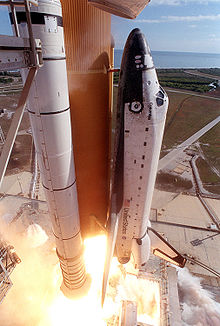 Columbia lifting off on its final mission.

At one point, there was some uncertainty over the future of the ISS. The Space Shuttle Columbia disaster on 1 February 2003, the subsequent two and a half year suspension of the U.S. Space Shuttle program, followed by problems with resuming flight operations in 2005, were major obstacles.

The Space Shuttle program resumed flight on 26 July 2005, with the STS-114 mission of Discovery. This mission to the ISS was intended both to test new safety measures implemented since the Columbia disaster, and to deliver supplies to the station. Although the mission succeeded safely, it was not without risk; foam was shed by the external tank, leading NASA to announce future missions would be grounded until this issue was resolved.

Between the Columbia disaster and the resumption of Shuttle launches, crew exchanges were carried out solely using the Russian Soyuz spacecraft. Starting with Expedition 7, two-astronaut caretaker crews were launched in contrast to the previously launched crews of three. Because the ISS had not been visited by a shuttle for an extended period, a larger than planned amount of waste accumulated, temporarily hindering station operations in 2004. However Progress transports and the STS-114 shuttle flight took care of this problem.

Construction of the International Space Station over New Zealand.

ISS construction is now far behind the original planned schedule for completion in 2004 or 2005. This is mainly due to the halting of all NASA Shuttle flights following the Columbia disaster in early 2003 (although there had been prior delays due partly to Shuttle problems, and partly to delays stemming from the Russian space agency's budget constraints). During the shuttle stand-down, construction of the ISS was halted and the science conducted aboard was limited due to the crew size of two.

As of the beginning of 2006, many changes were made to the originally planned ISS, even before the Columbia disaster. Modules and other structures were cancelled or replaced and the number of Shuttle flights to the ISS was reduced from previously planned numbers. However more than 80% of the hardware intended to be part of the ISS in the late 1990s was orbited and is part of the ISS's ultimate configuration.

In March 2006, a meeting of the heads of the five participating space agencies accepted the new ISS construction schedule that plans to complete the ISS by 2010.[3] A crew of six has been established as of May 2009, following 12 Shuttle construction flights after the second "Return to Flight" mission STS-121. Requirements for stepping up the crew size included enhanced environmental support on the ISS, a second Soyuz permanently docked on the station to function as a second 'lifeboat', more frequent Progress flights to provide double the amount of consumables, more fuel for orbit raising maneuvers, and a sufficient supply line of experimental equipment. 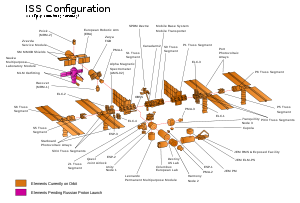 Although not permanently docked with the ISS, Multi-Purpose Logistics Modules (MPLMs) form part of the ISS during some Shuttle missions. An MPLM is attached to Harmony (initially to Unity) and is used for resupply and logistics flights.

Spacecraft docked to the ISS also extend the pressurized volume. At least one Soyuz spacecraft is always docked as a 'lifeboat' and is replaced every six months by a new Soyuz as part of crew rotation.

The table below shows the sequence in which these components were or will be added to the ISS. The numbers provided are indications and represent launch weight and dimensions.

The following modules are proposed, but not yet confirmed in the ISS launch manifests.