Endeavour straddling the stratosphere and mesosphere

The United States Congress authorized the construction of Endeavour in 1987 to replace Challenger, which was lost in the STS-51-L launch accident in 1986. Structural spares built during the construction of Discovery and Atlantis, two of the previous shuttles, were used in its assembly. NASA chose to build Endeavour from spares rather than refitting Enterprise or accepting a Rockwell International proposal to build two shuttles for the price of one of the original shuttles, on cost grounds.

The orbiter is named after the British HMS Endeavour, the ship which took Captain James Cook on his first voyage of discovery (1768–1771).[5] This is why the name is spelled in the British English manner, rather than the American English ("Endeavor"). This has caused confusion, most notably when NASA themselves misspelled a sign on the launch pad in 2007.[6] The name also honored Endeavour, the Command Module of Apollo 15, itself also named after Cook's ship.

Endeavour was named through a national competition involving students in elementary and secondary schools. Entries included an essay about the name, the story behind it and why it was appropriate for a NASA shuttle, and the project that supported the name. Endeavour was the most popular entry, accounting for almost one-third of the state-level winners. The national winners were Senatobia Middle School in Senatobia, Mississippi, in the elementary division and Tallulah Falls School in Tallulah Falls, Georgia, in the upper school division. They were honored at several ceremonies in Washington, D.C., including a White House ceremony where then-President George H.W. Bush presented awards to each school.[7]

Endeavour was delivered by Rockwell International Space Transportation Systems Division in May 1991 and first launched a year later, in May 1992, on STS-49. Rockwell International claimed that it had made no profit on Space Shuttle Endeavour, despite construction costing US$2.2 billion. On its first mission, it captured and redeployed the stranded INTELSAT VI communications satellite. The first African-American woman astronaut, Mae Jemison, was brought into space on the mission STS-47 on September 12, 1992.

In 1993, it made the first service mission to the Hubble Space Telescope. Endeavour was withdrawn from service for eight months in 1997 for a retrofit, including installation of a new airlock. In December 1998, it delivered the Unity Module to the Zarya module of the International Space Station.

Endeavour completed its latest Orbiter Major Modification period, which began in December 2003, and ended on October 6, 2005. During this time, the Orbiter Vehicle-105 received major hardware upgrades, including a new, multi-functional, electronic display system, often referred to as glass cockpit, and an advanced GPS receiver, along with safety upgrades recommended by the Columbia Accident Investigation Board (CAIB) for shuttle return to flight after the disintegration of sister-ship Columbia during re-entry on February 1, 2003.

The STS-118 mission, the first for Endeavour following a lengthy refit, included astronaut Barbara Morgan, formerly assigned to the Educator Astronaut program, but now a full member of the Astronaut Corps, as part of the crew. Morgan was the backup for Christa McAuliffe on the ill-fated STS-51-L mission. 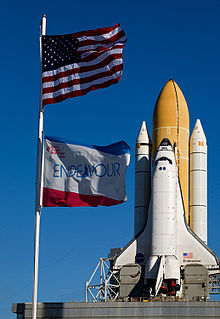 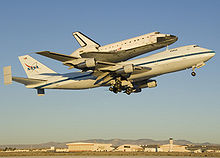 As it was constructed later, Endeavour was built with new hardware designed to improve and expand orbiter capabilities. Most of this equipment was later incorporated into the other three orbiters during out-of-service major inspection and modification programs. Endeavour’s upgrades include:

Modifications resulting from a 2005–2006 refit of Endeavour include:

Platforms around Endeavour in the Orbiter Processing Facility-2

Space Shuttle Endeavour docked to the ISS for the last time.

Endeavour flew its final mission, STS-134, to the International Space Station (ISS) in May 2011. After the conclusion of STS-134, Endeavour was formally decommissioned.

Endeavour was originally scheduled to be decommissioned in 2010 after 18 years of service, but on July 1, 2010, NASA released a statement saying the Endeavour mission was rescheduled for February 27, 2011, instead of late November, 2010.[11]

"The target dates were adjusted because critical payload hardware for STS-133 will not be ready in time to support the previously planned September 16 launch," NASA said in a statement. With the Discovery launch moving to November, Endeavour mission "cannot fly as planned, so the next available launch window is in February 2011," NASA said, adding that the launch dates are subject to change.

The launch was once again postponed until April 29, 2011, in order to avoid a scheduling conflict with a Russian supply vehicle heading for the International Space Station.[12]

Endeavour completed its final mission with a landing at the Kennedy Space Center at 6:34 UTC on June 1, 2011.[14] Over its flight career, Endeavour flew 122,853,151 miles and spent 299 days in space.[15] While flying Endeavour's last mission, the Russian spacecraft Soyuz TMA-20 departed from the ISS and paused at a distance of 200 meters. Italian astronaut Paolo Nespoli took a series of photographs and videos of the ISS with Endeavour docked.[16] This was the second time a Shuttle had been photographed while docked and the first time since 1996. Commander Mark Kelly was the last astronaut off Endeavour after the landing, and the crew stayed on the landing strip long enough to sign autographs and pose for pictures. With commander Mark Kelly and pilot Gregory Johnson at the controls, Endeavour's touchdown was the 25th time a shuttle performed a night landing.[17][18]

One final mission, STS-135, was added to the schedule in January 2011, and Atlantis is allocated to fly for the last time in July 2011.

NASA offered the three remaining orbiters for museum donation once they are withdrawn from service. After more than twenty organizations submitted proposals to NASA for the display of an orbiter, NASA announced that Enterprise will go to New York's Intrepid Sea-Air-Space Museum, Discovery will go the Steven F. Udvar-Hazy Center of the National Air and Space Museum, Atlantis will remain in the Visitor Complex at Kennedy Space Center, and Endeavour will go to the California Science Center.[19][20][21]

Endeavour's Canadarm will be removed and sent to a yet-to-be-determined museum in Canada, while the other two Canadarms will remain in the shuttles.[22] 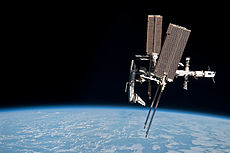 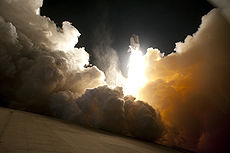