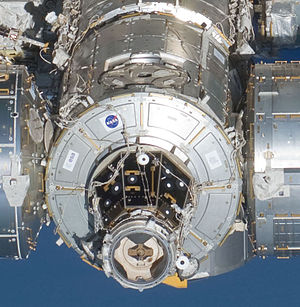 Node 2 shown connected to Columbus, JEM, PMA-2 and Discovery. The nadir and zenith locations are open.

Harmony, also known as Node 2, is the "utility hub" of the International Space Station. The hub contains four racks that provide electrical power, plus electronic data, and act as a central connecting point for several other components via its six Common Berthing Mechanisms (CBMs). Harmony added 2,666 cubic feet (75.5 m3) to the station's living volume, an increase of almost 20 percent, from 15,000 cu ft (420 m3) to 17,666 cu ft (500.2 m3) The successful installation of Harmony meant that from NASA's perspective, the station was "U.S. Core Complete". Harmony was successfully launched into space aboard Space Shuttle flight STS-120 on October 23, 2007.[1][2] After temporarily being attached to the port side of the Unity node,[3][4] it was moved to its permanent location on the forward end of the Destiny laboratory on November 14, 2007.[5]

The unit formerly known as Node 2 was renamed Harmony in March 2007.[6] The name was chosen from a competition involving more than 2,200 kindergarten through high school students from 32 states.[7][8] The Node 2 Challenge required students to learn about the space station, build a scale model, and write an essay explaining their proposed name for the module, which will serve as a central hub for science labs. 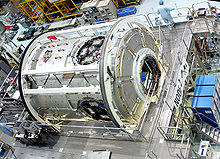 Weighing approximately 14,288 kilograms (31,500 lb), Harmony is the second of three connectors between the major ISS modules.[7] The design is based on the existing Multi-Purpose Logistics Module, as well as the European Space Agency's Columbus Module.[7] Harmony is managed by NASA's Marshall Space Flight Center in Huntsville, Alabama. Its deployment expanded the Space Station, allowing it to grow from the size of a three-bedroom house, to the space equivalent of a typical five-bedroom house, once the Japanese Kibō and European Columbus laboratories are attached. The Space Station robotic arm, Canadarm2, is able to operate from a powered grapple fixture on the exterior of Harmony.[9] After the cancellation of the Habitation Module, Harmony was chosen to house the American Crew Quarters. The first two were delivered on STS-126 and the second two on STS-128.[10][11]

In an agreement between NASA and the European Space Agency the Rome-based company Thales Alenia Space built Harmony at its facility in Turin, Italy.[9] Harmony arrived on June 1, 2003 at the Kennedy Space Center in Florida after its flight in an Airbus Beluga oversize cargo vehicle. Following post transportation inspection, the Italian Space Agency formally handed over Harmony to the European Space Agency (ESA). From there, ESA formally transferred ownership of Harmony to NASA on June 18, 2003, taking place in the Space Station Processing Facility of the Kennedy Space Center.[12] The handover of Harmony completed a major element of the barter agreement, between ESA and NASA, that was signed in Turin on October 8, 1997.[12]

Paolo A. Nespoli, an ESA astronaut born in Milan, Italy, accompanied the Harmony module aboard STS-120 as a mission specialist. 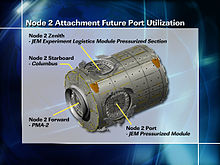 Harmony being prepared to be taken out of Space Shuttle Discovery's payload bay.

On October 26, the station's Space Station Remote Manipulator System (SSRMS) removed Harmony from the shuttle cargo bay and temporarily mated it to the port side of Unity and, on October 27, the crew entered Harmony.[3][16] After the Space Shuttle departed Harmony was relocated to the forward dock of the Destiny laboratory. It required three EVAs by the station crew to complete the installation.[16][17]

Harmony was the first permanent living space enlargement to the ISS after the Pirs docking compartment was added in 2001. The Expedition 16 crew moved the Pressurized Mating Adapter (PMA-2) on November 12, 2007 from the Destiny Laboratory to the forward berth of Harmony. The combined PMA-2/Harmony unit was subsequently berthed to its final destination at the forward end of the Destiny Laboratory on November 14, 2007.[5] All the following Space Shuttle missions would docked to this location. On February 11, 2008, ESA's Columbus laboratory was attached to the starboard hatch of the Harmony module during space shuttle mission STS-122. On March 14, 2008 the Experiment Logistics Module Pressurized Section (ELM-PS) of Kibō was attached to its interim location: the zenith hatch of Harmony. During STS-124 a Space Shuttle mission flown by Space Shuttle Discovery, the Pressurized Module of Kibō was added to the port side of Harmony and the ELM-PS was moved, leaving the zenith hatch empty. The zenith hatch was originally intended to be the permanent docking connector for the now canceled Centrifuge Accommodations Module (CAM).

If the Shuttle flies the Multipurpose Logistics Modules to the station, then such a module will be temporarily berthed to the nadir hatch of Harmony.[18] The Japanese H-II Transfer Vehicle temporarily berths at either the nadir or zenith hatch, American COTS vehicles will do the same.