The Dragon is a reusable spacecraft developed by SpaceX, a private space transportation company based in Hawthorne, California. During its unmanned maiden flight in December 2010, it became the first commercially-built and -operated spacecraft to ever be successfully recovered from orbit.[5]

The Dragon is contracted to deliver cargo to the International Space Station (ISS) under NASA's Commercial Resupply Services program. Additionally, NASA awarded SpaceX a Commercial Crew Development astronaut-transportation contract in April 2011. The Dragon is designed to carry up to seven astronauts, or a mixture of personnel and cargo, to and from low Earth orbit. The Dragon's heat shield is furthermore designed to withstand re-entry velocities from potential lunar and Martian space flights, for which it has been proposed as a crew vehicle.[6]

The Dragon is a conventional blunt-cone ballistic capsule with a nose-cone cap that jettisons to reveal a standard International Space Station (ISS) Common Berthing Mechanism. This mechanism allows the The Dragon to be captured by the Space Station Remote Manipulator System and berthed to the non-Russian segments of the ISS. The manned variant of the Dragon will use the NASA Docking System (NDS) for docking.

The Dragon capsule is launched atop a Falcon 9 rocket.[7] SpaceX has built a full-sized prototype of the capsule and "thoroughly tested" its life support system.[8] During its initial cargo and crew flights, the Dragon will land in the sea and be air-lifted to the shore by helicopter, although SpaceX plans to eventually install deployable landing gear and use 8 upgraded SuperDraco thrusters to perform a land-based landing.[9][10][11]

Development started on the Dragon capsule in 2005. In 2006, SpaceX was contracted by NASA to begin demonstration flights of the capsule under the COTS program (see NASA partnership).[12] In June 2009, SpaceX CEO Elon Musk stated that the company planned to conduct the maiden flight of the Dragon spacecraft in 2009, and have the capsule enter service in 2010, before the scheduled final flight of the Space Shuttle.[13] However, the Dragon's maiden flight did not ultimately occur until December 2010, and the Space Shuttle was retired in July 2011, prior to the beginning of the Dragon's commercial operations.[14]

On 23 February 2009, SpaceX announced that its chosen heat shield material, PICA-X (a proprietary variant of NASA's phenolic impregnated carbon ablator material), had passed heat stress tests in preparation for the Dragon's maiden launch.[15] In 2010, Elon Musk stated that the Dragon "is capable of re-entering from a Lunar velocity, or even a Mars velocity with the heat shield that it has."[16]

The first flight of a stripped-down version of the Dragon capsule occurred in June 2010, during the Falcon 9 rocket's maiden flight. This Dragon Spacecraft Qualification Unit was originally used as a non-flying test bed to validate several of the capsule's systems. During its first flight, the unit's primary mission was to relay aerodynamic data captured during the ascent.[17][18] The Dragon spacecraft itself first flew on 8 December 2010, during the second flight of the Falcon 9.[19]

The docking target system for the Dragon module, the DragonEye, was tested in 2009 during the STS-127 Space Shuttle mission, when it was mounted near Space Shuttle Endeavour's docking port and used while the shuttle approached the International Space Station. The DragonEye's LIDAR and thermal imaging capabilities were both tested successfully.[20] The DragonEye flew again on STS-133 in February 2011 for further on-orbit testing.[21]

On 22 November 2010, NASA announced that the Federal Aviation Administration (FAA) had issued a reentry license for the Dragon capsule, the first such license ever awarded to a commercial vehicle.[22]

In summer 2009, SpaceX hired former NASA astronaut Ken Bowersox as vice president of their new Astronaut Safety and Mission Assurance Department, in preparation for manned use of the spacecraft.[23]

In 2009 and 2010, Elon Musk suggested on several occasions that plans for a manned variant of the Dragon were proceeding and had a 2–3 year timeline to completion.[24][25]

The Dragon capsule being unwrapped at Cape Canaveral Air Force Station in October 2011, prior to being processed for its COTS 2 demonstration mission.

In 2005, NASA solicited commercial rocket companies to submit proposals for its Commercial Orbital Transportation Services (COTS) program, which entails the commercial resupply of the International Space Station (ISS), replacing the now-retired Space Shuttle. The Dragon spacecraft was part of SpaceX's proposal, submitted to NASA in March 2006. SpaceX's team for the COTS proposal consisted of a number of companies including MD Robotics, and the Canadian company that built the ISS's Mobile Servicing System.

On 18 August 2006, NASA announced that SpaceX had been chosen, along with Kistler Aerospace, to develop cargo launch services for the ISS. The initial plan called for three demonstration flights of SpaceX's Dragon capsule to be conducted between 2008 and 2010. SpaceX and Kistler were to receive up to $278 million if they met all NASA milestones, but Kistler failed to meet its obligations, and its contract was terminated in 2007.[26][27][28] NASA decided to re-award Kistler's portion of the contract after a competition.[29] On 19 February 2008 NASA announced that it had chosen Orbital Sciences as the new winner.[30]

NASA awarded a cargo delivery contract to SpaceX on 23 December 2008. The contract called for a minimum of 20,000 kg (44,000 lb) of cargo to be carried to the ISS over the course of up to 12 flights, at a cost of US$1.6 billion, with options that potentially increased the maximum contract value to $3.1 billion.[31]

The first of the three contracted demonstration flights was successfully flown on 8 December 2010.[32] A second flight is scheduled to occur in January 2012.[33]

In December 2010, SpaceX submitted a proposal under a different NASA solicitation to help NASA transport astronauts to the International Space Station after Space Shuttle retirement. Under phase 2 of the NASA Commercial Crew Development program,[34] SpaceX proposes to develop an "integrated launch abort system design" for the Dragon spacecraft, with several claimed advantages over the more traditional tractor tower approaches used on all prior manned space capsules. These advantages include:[35]

A video simulation of this escape system's operation was released in January 2011.[10] According to Elon Musk, the developmental cost of a crewed Dragon and Falcon 9 would be between $800 million and $1 billion.[36]

In April 2011, NASA announced that SpaceX would receive $75 million under the CCDev 2 program to advance the development of its side-mounted launch abort system and crew transportation capsule. The CCDev 2 program between NASA and SpaceX began in April 2011 and will run until May 2012. NASA is aiming to be able to fly commercial vehicles to the ISS by 2016.[37] SpaceX's launch abort system received preliminary design approval from NASA in October 2011.[38]

As of July 2011[update], NASA Ames Research Center is developing a concept for a low-cost Mars-exploration mission utilising a Falcon Heavy as the launch vehicle and trans-Martian injection vehicle, and the Dragon capsule to enter the Martian atmosphere and house the Mars surface science experiments. The concept would be proposed in 2012/2013 as a NASA Discovery mission for launch in 2018 and arrival at Mars several months later. The science objectives of the mission would include the search for evidence of life on Mars — detecting "molecules that are proof of life, like DNA or perchlorate reductase ... proof of life through biomolecules. ... Red Dragon would drill 3.3 feet (1.0 m) or so underground, in an effort to sample reservoirs of water ice known to lurk under the red dirt." The mission cost is projected to be less than US$425,000,000, not including the launch cost.[39]

The maiden launch of the SpaceX Dragon on a Falcon 9 rocket, 8 December 2010.

On 8 December 2010, a Falcon 9 rocket lifted off from Cape Canaveral in Florida, carrying an unmanned SpaceX Dragon on COTS Demo Flight 1. The launch was a success, and the Dragon cleanly separated from the Falcon approximately 10 minutes after launch. Three hours of orbital maneuvering tests were conducted at an altitude of 300 kilometres (190 mi; 160 nmi) before a deorbit burn was conducted, putting the Dragon on a re-entry course that ended in a successful splashdown in the Pacific Ocean, approximately 800 kilometres (500 mi; 430 nmi) west of Mexico's Pacific coast.[40]

The recovery of the Dragon capsule in the Pacific Ocean after re-entry.

SpaceX president Gwynne Shotwell stated that this was the first of three primary flight tests under the NASA COTS contract. NASA Administrator Charles Bolden offered his congratulations to SpaceX on the company's successful mission.[41]

Though the Dragon capsule transported neither passengers nor practical cargo, the Space X team launched the spacecraft with a small piece of secret payload. It was revealed more than a day after the successful flight that the secret cargo was a wheel of Le Brouère cheese. The stunt was said to be an homage to the well-known Cheese Shop sketch from the British comedy series, Monty Python's Flying Circus. SpaceX's CEO did not reveal the identity of the cargo during the post-splashdown news conference, for fear of the joke overshadowing the company's accomplishments.[42]

General specifications for the spacecraft that apply to both its crew and cargo configurations include: 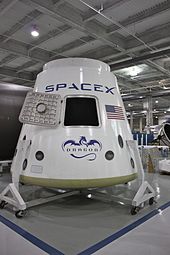 When used for commercial (non-NASA, non-ISS) flights, the uncrewed version of the Dragon spacecraft is named DragonLab.[44] It is reusable and free-flying, and is capable of carrying both pressurized and unpressurized payloads. Its subsystems include propulsion, power, thermal and environmental control, avionics, communications, thermal protection, flight software, guidance and navigation systems, and entry, descent, landing, and recovery gear."[2] It has a total combined up-mass of 6,000 kilograms (13,000 lb) upon launch, and a maximum down-mass of 3,000 kilograms (6,600 lb) when returning to Earth.[2]

As of December 2010[update], the SpaceX production line is manufacturing one new Dragon spacecraft every three months.[45]