The Space Shuttle Atlantis (Orbiter Vehicle Designation: OV-104) is a retired Space Shuttle orbiter in the Space Shuttle fleet belonging to the National Aeronautics and Space Administration (NASA), the spaceflight and space exploration agency of the United States.[1] Atlantis was the fourth operational (and the next-to-the-last) Space Shuttle to be constructed by the Rockwell International company in Southern California, and it was delivered to the John F. Kennedy Space Center in eastern Florida in April 1985.[2][3] Atlantis was the only orbiter which lacked the ability to draw power from the International Space Station while docked there; it had to continue to provide its own power through fuel cells.[4]

The last mission of Atlantis was STS-135, the last flight before the Shuttle program ended. This final flight was authorized by President Barack Obama in October 2010, to bring additional supplies to the International Space Station and take advantage of the processing performed for the Launch on Need mission, which would only have been flown in the event that Endeavour's STS-134 crew required rescue.[5] Atlantis launched successfully for the final time on 8 July 2011 at 16:29 UTC, landing at the John F. Kennedy Space Center on 21 July 2011 at 09:57 UTC. By the end of its final mission, Atlantis had orbited the Earth 4,848 times, traveling nearly 126 million miles in space or more than 525 times the distance from the Earth to the Moon.

Atlantis was named after RV Atlantis, a two-masted sailing ship that operated as the primary research vessel for the Woods Hole Oceanographic Institution from 1930 to 1966.[6] The 460-ton ketch carried a crew of 17 and had room for 5 scientists.[7] 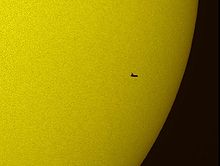 Space Shuttle Atlantis as it transits the sun

Atlantis docked to the Space Station during STS-132 mission.

Space Shuttle Atlantis lifted off on its maiden voyage on 3 October 1985, on mission STS-51-J, the second dedicated Department of Defense flight.[9] It flew one other mission, STS-61-B, the second night launch in the shuttle program, before the Space Shuttle Challenger disaster temporarily grounded the shuttle fleet in 1986. Atlantis was used for ten flights between 1988 and 1992. Two of these, both flown in 1989, deployed the planetary probes Magellan to Venus (on STS-30) and Galileo to Jupiter (on STS-34). With STS-30 Atlantis became the first shuttle to launch an interplanetary probe.[10] During another mission, STS-37 flown in 1991, Atlantis deployed the Compton Gamma Ray Observatory. Beginning in 1995 with STS-71, Atlantis made seven straight flights to the former Russian space station Mir as part of the Shuttle-Mir Program. STS-71 marked a number of firsts in human spaceflight: 100th U.S. manned space flight; first U.S. shuttle-Russian Space Station Mir docking and joint on-orbit operations; and first on-orbit changeout of shuttle crew.[11] When linked, Atlantis and Mir together formed the largest spacecraft in orbit at the time. 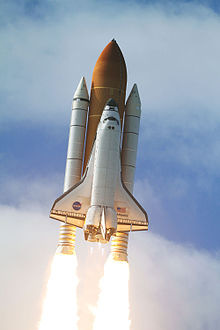 Atlantis heads toward Earth orbit at the beginning of STS-129.

Shuttle Atlantis also delivered several vital components for the construction of the International Space Station (ISS). During the February 2001 mission STS-98 to the ISS, Atlantis delivered the Destiny Module, the primary operating facility for U.S. research payloads aboard the ISS.[12] The five hour 25 minute third spacewalk performed by astronauts Robert Curbeam and Thomas Jones during STS-98 marked NASA's 100th extra vehicular activity in space.[13] The Quest Joint Airlock, was flown and installed to the ISS by Atlantis during the mission STS-104 in July 2001.[14] The successful installation of the airlock gave on-board space station crews the ability to stage repair and maintenance spacewalks outside the ISS using U.S. EMU or Russian Orlan space suits. The first mission flown by Atlantis after the Space Shuttle Columbia disaster was STS-115, conducted during September 2006.[15] The mission carried the P3/P4 truss segments and solar arrays to the ISS. On ISS assembly flight STS-122 in February 2008, Atlantis delivered the Columbus laboratory to the ISS.[16] Columbus laboratory is the largest single contribution to the ISS made by the European Space Agency (ESA).[17]

Space Shuttle Atlantis docked to the ISS for the final time.

In May 2009 Atlantis flew a seven member crew to the Hubble Space Telescope for its Servicing Mission 4, STS-125.[18] The mission was a success, with the crew completing five space walks totaling 37 hours to install new cameras, batteries, a gyroscope and other components to the telescope.

Among the five space shuttles flown into space, Atlantis conducted a subsequent mission in the shortest time after the previous mission when it launched in November, 1985 on STS-61-B, only 50 days after its previous mission, STS-51-J.

The longest mission flown using shuttle Atlantis was STS-117 and lasted almost 14 days in June 2007.[19] During STS-117, Atlantis' crew added a new starboard truss segment and solar array pair (the S3/S4 truss), folded the P6 array in preparation for its relocation and performed four spacewalks. Atlantis was not equipped to take advantage of the Station-to-Shuttle Power Transfer System so missions could not be extended by making use of power provided by ISS.[20]

Atlantis went through two overhauls of scheduled Orbiter Maintenance Down Periods (OMDPs) during its operational history.

Atlantis arrived at Palmdale, California in October 1992 for OMDP-1. During that visit 165 modifications were made over the next 20 months. These included the installation of a drag chute, new plumbing lines to configure the orbiter for extended duration, more than 800 new heat tiles and blankets and new insulation for main landing gear and structural modifications to the airframe.[21]

On 5 November 1997, Atlantis again arrived at Palmdale for OMDP-2 which was completed on 24 September 1998. The 130 modifications carried out during OMDP-2 included glass cockpit displays, replacement of TACAN navigation with GPS and ISS airlock and docking installation. Several weight reduction modifications were also performed on the orbiter including replacement of Advanced Flexible Reusable Surface Insulation (AFRSI) insulation blankets[22] on upper surfaces with FRSI. Moreover lightweight crew seats were installed and the Extended Duration Orbiter (EDO) package installed on OMDP-1 was removed to lighten Atlantis to better serve its prime mission of servicing the ISS.

During the stand down period post Columbia accident, Atlantis went through over 75 modifications to the orbiter ranging from very minor bolt change-outs to window change-outs and different fluid systems.[23]

Atlantis was known among the shuttle workforce as being more prone than the others in the fleet to problems that needed to be addressed while readying the vehicle for launch leading to some nicknaming her "Britney".[24]

NASA had planned to withdraw Atlantis from service in 2008, as the orbiter would have been due to undergo its third scheduled OMDP. However, because of the final retirement of the shuttle fleet in 2010, this was deemed uneconomical. It was planned that Atlantis would be kept in near flight condition to be used as a parts hulk for Discovery and Endeavour. However, with the significant planned flight schedule up to 2010, the decision was taken to extend the time between OMDPs, allowing Atlantis to be retained for operations. Atlantis has been swapped for one flight of each Discovery and Endeavour in the current flight manifest. Atlantis had completed what was meant to be its last flight, STS-132, prior to the end of the shuttle program,[25] but the extension of the Shuttle program into 2011 led to Atlantis being the STS-135, the final Space Shuttle mission in July 2011.

Once Atlantis is finally decommissioned, it will be displayed at the Kennedy Space Center Visitor Complex.[26] NASA Administrator Charles Bolden announced the decision at an employee event held on 12 April 2011 to commemorate the 30th anniversary of the first shuttle flight: "First, here at the Kennedy Space Center where every shuttle mission and so many other historic human space flights have originated, we'll showcase my old friend, Atlantis."[27][28]

The Visitor Complex plans to suspend Atlantis with cargo bay doors opened such that it appears to be back in orbit around the Earth. A multi-story digital projection of the home planet that will rotate behind the orbiter in a 64,000-square-foot (5,900 m2) indoor facility is also proposed.[29][30] Ground breaking of the facility is planned to begin in 2012 with the exhibit opening in 2013.[31]

Crewmembers for the final Hubble Servicing Mission, STS-125 pose for a photo on the flight deck of Atlantis.

A total of 156 unique individuals flew with Space Shuttle Atlantis over the course of its 33 missions.[32] Because the shuttle sometimes flew crew members arriving and departing Mir and the ISS, not all of them launched and landed on Atlantis.

Astronaut Clayton Anderson, ESA astronaut Leopold Eyharts and Russian cosmonauts Nikolai Budarin and Anatoly Solovyev only launched on Atlantis. Similarly, astronauts Daniel Tani and Sunita Williams, as well as cosmonauts Vladimir Dezhurov and Gennady Strekalov only landed with Atlantis. Only 146 men and women both launched and landed aboard Atlantis.[citation needed]

Some of those people however, flew with Atlantis more than once. Taking them into account, 203 total seats were filled over Atlantis' 32 missions. Astronaut Jerry Ross holds the record for the most flights aboard Atlantis at five.[32]

Astronaut Michael Massimino who flew on STS-125 mission became the first person to use Twitter in space in May 2009.[8]

NASA announced in 2007 that 24 helium and nitrogen gas tanks in Atlantis were older than their designed lifetime. These composite overwrapped pressure vessels (COPV) were designed for a 10 year life and later cleared for an additional 10 years; they exceeded this life in 2005. NASA said it cannot guarantee any longer that the vessels on Atlantis will not burst or explode under full pressure. Failure of these tanks could damage parts of the shuttle and even wound or kill ground personnel. An in-flight failure of a pressure vessel could even result in the loss of the orbiter and its crew. NASA analyses originally assumed that the vessels would leak before they burst, but new tests showed that they could in fact burst before leaking.

Because the original vendor was no longer in business, and a new manufacturer could not be qualified before 2010, when the shuttles were scheduled to be retired, NASA decided to continue operations with the existing tanks. Therefore, to reduce the risk of failure and the cumulative effects of load, the vessels will be maintained at 80 percent of the operating pressure as late in the launch countdown as possible, and the launch pad will be cleared of all but essential personnel when pressure is increased to 100 percent. The new launch procedure will be employed during the remaining Atlantis launches if no other resolution is found. Atlantis will have to fly at least once under this requirement.[45]

However, since the problem was discovered, the two COPV's deemed to have the highest risk of failure have been replaced.[46]

After the STS-125 mission, a work light knob was discovered jammed in the space between one of Atlantis's front interior windows and the Orbiter dashboard structure. The knob was believed to have entered the space during flight, when the pressurized Orbiter was expanded to its maximum size. Then, once back on Earth, the Orbiter contracted, jamming the knob in place. Leaving "as-is" was considered unsafe for flight, and some options for removal (including window replacement) would have included a 6 month delay of Atlantis's next mission (planned to be STS-129). Had the removal of the knob been unsuccessful, the worst-case scenario is that Atlantis could have been retired from the fleet, leaving Discovery and Endeavour to complete the manifest alone. On 29 June 2009, Atlantis was pressurised to 17 psi/120 kPa (3psi-delta), which forced the Orbiter to expand slightly. The knob was then frozen with dry ice, and was successfully removed.[47] Small areas of damage to the window were discovered where the edges of the knob had been embedded into the pane.[48] Subsequent investigation of the window damage discovered a maximum defect depth of approximately 0.0003 in/0.0076 mm, less than the reportable depth threshold of 0.0015 in/0.038 mm and not serious enough to warrant the pane’s replacement.[49]