Mastodon State Historic Site is an archaeological and paleontological site in Imperial, Missouri, containing the Kimmswick Bone Bed. Bones of mastodons and other now-extinct animals were first found here in the early 19th century. The area gained fame as one of the most extensive Pleistocene ice age deposits in the country and attracted scientific interest worldwide. 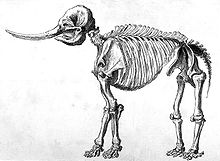 Drawing of a mastodon skeleton by Rembrandt Peale

Archaeological history was made at the site in 1979 when scientists excavated a stone spear point made by hunters of the Clovis culture (14,000 - 10,000 years ago) in direct association with mastodon bones. This was the first solid evidence of the coexistence of people and these giant prehistoric beasts.

Today, the 425-acre (1.7 km2) property preserves this National Register of Historic Places site and provides recreational opportunities. A museum tells the natural and cultural story of the oldest American Indian site one can visit in the state's park system. A full-size replica of a mastodon skeleton highlights the exhibits. A picnic area, several trails and a special-use campground offer chances to explore the land where the lives of Native Americans and mastodons once intertwined.