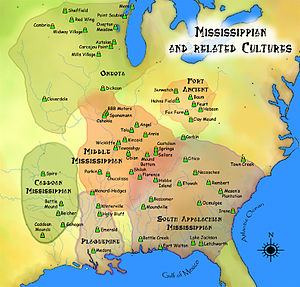 The Mississippian culture was a mound-building Native American culture that flourished in what is now the Midwestern, Eastern, and Southeastern United States from approximately 800 CE to 1500 CE, varying regionally.[1] 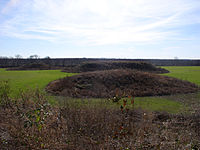 Platform mounds at the Kincaid Site in Massac Co., Ill. 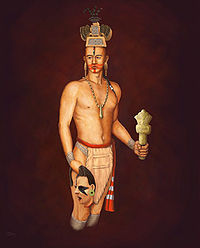 A Mississippian priest, with a ceremonial flint mace and severed head. Artist Herb Roe, based on a repoussé copper plate.

A number of cultural traits are recognized as being characteristic of the Mississippians. Although not all Mississippian peoples practiced all of the following activities, they were distinct from their ancestors in adoption of some or all of these traits.

The Mississippians had no writing system or stone architecture. They worked naturally occurring metal deposits, but did not smelt iron or make bronze metallurgy. 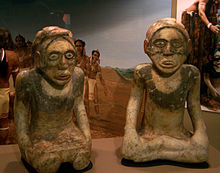 The Mississippian stage is usually divided into three or more periods. Each of these periods is an arbitrary historical distinction that varies from region to region. At one site, each period may be considered to begin earlier or later, depending on the speed of adoption or development of given Mississippian traits. 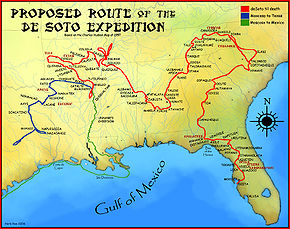 A map showing the de Soto route through the Southeast

At Joara, near Morganton, North Carolina, Native Americans of the Mississippian culture interacted with Spanish explorers of the Juan Pardo expedition, who built a base there in 1567 called Fort San Juan. Expedition documentation and archaeological evidence of the fort and Native American culture both exist. The soldiers were at the fort about 18 months (1567–1568) before the natives killed them and destroyed the fort. (They killed soldiers stationed at five other forts as well; only one man of 120 survived.) Sixteenth-century Spanish artifacts have been recovered from the site, marking the first European colonization in the interior of what became the United States.[5]

Scholars have studied the records of Hernando de Soto's expedition of 1539–1543 to learn of his contacts with Mississippians, as he traveled through their villages of the Southeast. He visited many villages, in some cases staying for a month or longer. The List of sites and peoples visited by the Hernando de Soto Expedition chronicles those villages. Some encounters were violent, while others were relatively peaceable. In some cases, de Soto seems to have been used as a tool or ally in long-standing native feuds. In one example, de Soto negotiated a truce between the Pacaha and the Casqui.

De Soto's later encounters left about half of the Spaniards and perhaps many hundreds of Native Americans dead. The chronicles of de Soto are among the first documents written about Mississippian peoples, and are an invaluable source of information on their cultural practices. The chronicles of the Narváez expedition were written before the de Soto expedition; the Narváez expedition that informed the Court of de Soto about the New World.

After the destruction and flight of the de Soto expedition, the Mississippian peoples continued their way of life with little direct European influence. Indirectly, however, European introductions dramatically changed native societies in the Eastern United States. Because the natives lacked immunity to new infectious diseases, such as measles and smallpox, epidemics caused so many fatalities that they undermined the social order of many chiefdoms. Some groups adopted European horses and changed to nomadism.[6] Political structures collapsed in many places.

By the time more documentary accounts were being written, the Mississippian way of life had changed irrevocably. Some groups maintained an oral tradition link to their mound-building past, such as the late 19th-century Cherokee[7]. Other Native American groups, having migrated many hundreds of miles and lost their elders to diseases, did not know their ancestors had built the mounds dotting the landscape. This contributed to the myth of the Mound Builders as a people distinct from Native Americans, which was rigorously debunked by Cyrus Thomas in 1894. 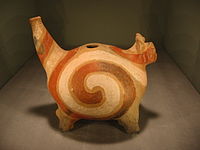 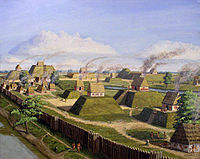 The Kincaid Site as it may have looked at its peak

Although the Mississippian culture was severely disrupted before Europeans documented its political landscape, explorers wrote about many Mississippian political bodies and others have been discovered by research. Some of the major sites are listed below; for a more comprehensive list see List of Mississippian sites.