Scelba was born in Caltagirone, Sicily, the son of a poor sharecropper on land owned by the priest Don Luigi Sturzo, one of the founders of the Italian People's Party (Partito Popolare Italiano, PPI).[1][2] He studied law and graduated at the University of Rome.

Scelba was Sturzo's godchild and protégé. Sturzo paid for his law studies in Rome and employed him as his private secretary. When the Fascists suppressed the PPI and forced Sturzo into exile (in Brooklyn, part of the time), Scelba remained in Rome as his agent. He wrote for the underground paper Il Popolo during World War II. Arrested by the Germans, he was released within three days as a worthless catch.[1][2]

On the day of Rome's liberation by the Allied forces, he joined the new five-man national directorate of the Christian Democracy (Democrazia Cristiana, DC).[2] The Christian Democrats started organising post-Fascist Italy in competition with, but also for a time in coalition with, the parties of the centre and left. In 1945, Scelba won a seat in the post-war Italian Constituent Assembly and entered Ferruccio Parri's anti-fascist government as Minister of Post and Telecommunications, a post he retained in the two successive governments of Alcide de Gasperi.[3]

On February 2, 1947, Scelba became Minister of the Interior in the third government of Premier Alcide de Gasperi, remaining, with some brief interludes, until July 1955. The short, bald, plump, oddly-impressive Scelba was probably the most powerful man in the successive governments of De Gasperi, after the Premier himself.[4]

As Minister, his hard-fisted record earned him the nickname "Iron Sicilian" for his ruthless suppression of left-wing workers protests and strikes, as well as Neo Fascist rallies. When he first took over, the police were so shoddy that Scelba exclaimed: "If I were Communist, I'd start a revolution tomorrow."[2] He wrote the so-called Scelba law, formally banning Fascism, but also designed to restrain the activities of the Communist party.[5]

The Reparto Celere, a special jeep-riding riot squad of the Italian police in their Willys Jeep

Scelba built the country's dishevelled police into a force of some 200,000, heavily armed and equipped with armoured cars and special jeep-riding riot squads called the Reparto Celere.[1] He made himself known as a man of action against what he considered Communist disorder. In doing so, Scelba made himself many enemies, including many democrats who disapproved his harsh methods. His short, stubby figure and broad eye-twinkling smile was popular with political cartoonists.[1]

Scelba had a conservative attitude toward certain issues such as scant bathing suits, public kissing and nude statues. Despite this and his single-minded concern for law and order, on socio-economic issues Scelba leaned left of centre in the Democrazia Cristiana. He favoured more social reforms and public works, attacking speculators for pushing up prices. "It is virtually impossible," he once said, "to be Minister of Interior for a government that doesn't care if the people work or not."[2] Scelba emphasized the possibility of undermining Communist strength "by determined measures of social and economic improvement – land reform of the great latifundias in south Italy, for example."[4]

Scelba was involved in setting up the Gladio network, the clandestine NATO "stay-behind" operation in Italy after World War II, intended to organise resistance after a Warsaw Pact invasion of Western Europe.[6] 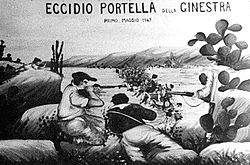 After just three months in office as Minister of the Interior, Scelba was confronted with the Portella della Ginestra massacre. Twelve days after the left-wing election victory in the Sicilian regional elections of 1947, the May 1 labour parade in Portella della Ginestra was attacked, culminating in the killing of 11 people and the wounding of over thirty. The attack was attributed to the bandit and separatist leader Salvatore Giuliano,[7] the aim being to punish local leftists for the recent election results.[8]

Scelba reported to Parliament the next day that so far as the police could determine, the Portella della Ginestra shooting was non-political. He claimed that bandits notoriously infested the valley in which it occurred.[7] However, that version was challenged by the left. The Communist deputy Girolamo Li Causi stressed the political nature of the massacre, claiming that the Mafia had perpetrated the attack, in cahoots with the large landowners, monarchists and the rightist Uomo Qualunque Front.[7] He also claimed that police inspector Ettore Messana – supposed to coordinate the prosecution of the bandits – had been in league with Giuliano and denounced Scelba for allowing Messana to remain in office. Later documents would substantiate the accusation.[9] Li Causi and Scelba would be the main opponents in the aftermath of the massacre – the subsequent killing of alleged perpetrator, Salvatore Giuliano, and the trial against Giuliano's lieutenant Gaspare Pisciotta and other remaining members of Giuliano's gang.

The trial of those responsible was held in the city of Viterbo, starting in the summer of 1950. During the trial, Scelba was again accused of involvement in the plot to carry out the massacre, but the accusations were often contradictionary or vague. In the end, the judge concluded that no higher authority had ordered the massacre, and that the Giuliano band had acted autonomously.[8] At the trial Pisciotta said: “Again and again Scelba has gone back on his word: Mattarella and Cusumano returned to Rome to plead for total amnesty for us, but Scelba denied all his promises.” Pisciotta also claimed that he had killed Salvatore Giuliano in his sleep by arrangement with Scelba. However, there was no evidence that Scelba had had any relationship with Pisciotta.[10]

The general elections in April 1948 were heavily influenced by the cold-war confrontation between the Soviet Union and the United States. After the Soviet-inspired February 1948 communist coup in Czechoslovakia, the US became alarmed about Soviet intentions and feared that, if the leftist coalition were to win the elections, the Soviet-funded Italian Communist Party (PCI) would draw Italy into the Soviet Union's sphere of influence. The election campaign remains unmatched in verbal aggression and fanaticism in Italy's history, on both sides. The Christian Democratic propaganda became famous in claiming that in Communist countries "children sent parents to jail", "children were owned by the state", "people ate their own children", and claiming disaster would strike Italy if the left were to take power.[11][12]

Interior Minister Mario Scelba announced that the government had 330,000 men under arms, including a special shock force of 150,000 ready to take on the Communists if they tried to make trouble on election day.[11] The definitive test of strength came in 1950 during a nationwide general strike and mounting street clashes. On one day in March 1950, hundreds were wounded, including many policemen, and 7,000 people were arrested.[3]

On February 10, 1954, Scelba formed a new centrist government with a thin majority. It lasted until July 2, 1955. He sought strong relations with the United States and helped resolve outstanding wartime issues like the recovery of Trieste for Italy and pushed through the Paris Peace Treaties of 1947 with the wartime Allied powers.[3][13]

While appointed Prime Minister, the aftermath of the Portella della Ginestra massacre came to haunt Scelba again. On February 9, 1954, Gaspare Pisciotta was found dead in his cell.[1] After Pisciotta had been sentenced to life in imprisonment and forced labour, he realized that he had been abandoned by all. He declared that he was going to tell the whole truth, in particular who signed the letter which had been brought to Giuliano, which demanded the massacre at Portella delle Ginestra in exchange for liberty for the bandits and which Giuliano had destroyed immediately.[10]

The cause of Pisciotta's death, as revealed by the autopsy, was the ingestion of 20 mg of strychnine. All Italy was alive with theories about who killed Pisciotta. Both the government and the Mafia were suggested as being behind the murder of Pisciotta, but no one was ever brought to trial. The fascist and Communist press did their best to put it on newly appointed Premier Scelba's administration, but had no evidence to go on.[1]

Another scandal that rocked Scelba’s government was the Montesi affair. Foreign Minister Attilio Piccioni, a co-founder of Italy's Christian Democrat Party, as well as the national police chief, had to resign when Piccioni's jazz-pianist son was implicated in the scandal involving sex, narcotics and the death of party girl, Wilma Montesi.[14][15]

At the end of 1954, Scelba approved a package of measures against the Communist party and trade unions that was largely modelled on United States psychological warfare plans first elaborated in 1951–2. However, it proved to be a cosmetic as much as desperate attempt to consolidate his precarious position at home, by obtaining a formal American backing. Its half-hearted implementation exacerbated Washington's resentment toward its Italian allies and barely affected PCI's organizational structure. The PCI used the episode to denounce the illiberal nature of the Christian Democrat regime and to pose itself once more as the real defender of political liberties and constitutional rights.[16]

Scelba's fall was accomplished by his own party, due to political manoeuvring of party rivals like ex-Premier Giuseppe Pella (who wanted to be Premier again) and Party Secretary Amintore Fanfani (who also liked to be Premier). His chief regret, said Scelba, was that he had been overthrown not by a parliamentary vote but by party manoeuvring.[13]

After Scelba's fall, a political rival from the party's left wing, Antonio Segni, put together the first of Italy's many centre-left coalitions. Although he remained a member of the Italian parliament, Scelba's moderate right wing of the party never had the strength to command another government.[3] In 1958, Scelba formed his own corrente or faction within the Christian Democratic Party, the Centrismo popolare, made up by conservative politicians such Guido Gonella, Roberto Lucifredi, Mario Martinelli and Oscar Luigi Scalfaro. Scelba absolved the faction in 1968. In 1960–2 he again served as Minister of the Interior in the government of Amintore Fanfani.

Scelba was elected in the Italian Constituent Assembly in 1946 and was a member of the Italian Chamber of Deputies from 1948–68. He was elected as a Senator in 1968 and served until 1979 when he resigned. He was a fervent supporter of European Unity and was a member of the European Parliament from 1960–79, and was its president from 1969 to 1971.[17]