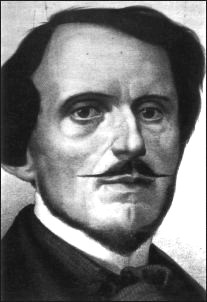 Ricasoli was born in , in the . Left an orphan at eighteen, with an estate heavily encumbered, he was by special decree of the grand duke of Tuscany declared of age. and entrusted with the guardianship of his younger brothers. Interrupting his studies, he withdrew to Broglio, and by careful management disencumbered the family possessions. In 1847 he founded the journal "La Patria", and addressed to the grand duke a memorial suggesting remedies for the difficulties of the state. In 1848 he was elected "Gonfaloniere" of , but resigned on account of the anti-Liberal tendencies of the grand duke.

As Tuscan minister of the interior in 1859 he promoted the union of Tuscany with Piedmont, which took place on , . Elected Italian deputy in 1861, he succeeded Cavour in the premiership. As premier he admitted the Garibaldian volunteers to the regular army, revoked the decree of exile against Mazzini, and attempted reconciliation with the Vatican; but his efforts were rendered ineffectual by the "non possumus" of the pope.

Disdainful of the intrigues of his rival Rattazzi, he found himself obliged in 1862 to resign office, but returned to power in 1866. On this occasion he refused 's offer to cede to Italy, on condition that Italy should abandon the n alliance, and also refused the Prussian decoration of the Black Eagle because La Marmora, author of the alliance, was not to receive it.

Upon the departure of the French troops from Rome at the end of 1866 he again attempted to conciliate the Vatican with a convention, in virtue of which Italy would have restored to the Church the property of the suppressed religious orders in return for the gradual payment of 24,000,000. In order to mollify the Vatican he conceded the to forty-five bishops inimical to the Italian régime. The Vatican accepted his proposal, but the Italian Chamber proved refractory, and, though dissolved by Ricasoli, returned more hostile than before. Without waiting for a vote, Ricasoli resigned office and thenceforward practically disappeared from political life, speaking in the Chamber only upon rare occasions. He died at Broglio on the 23rd of October 1880.

His private life and public career were marked by the utmost integrity, and by a rigid austerity which earned him the name of the Iron Baron. In spite of the failure of his ecclesiastical scheme, he remains one of the most noteworthy figures of the Italian "Risorgimento".