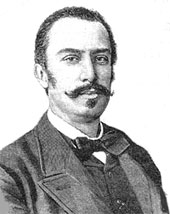 Giolitti was born at (). After a rapid career in the financial administration he was, in 1882, appointed councillor of state and elected to the Chamber of Deputies (the of Parliament). As deputy he chiefly acquired prominence by attacks on Magliani, treasury minister in the Depretis cabinet, and on was himself selected as treasury minister by Prime Minister Crispi. On the fall of the di Rudinì cabinet in May 1892, Giolitti, with the help of a court clique, succeeded to the premiership.

Giolitti's first term as (1892-1893) was marked by misfortune and misgovernment. The building crisis and the commercial rupture with France had impaired the situation of the state banks, of which one, the "Banca Romana", had been further undermined by maladministration. A bank law passed by Giolitti failed to effect an improvement. Moreover, he irritated public opinion by raising to senatorial rank the director-general of the "Banca Romana", Bernardo Tanlongo, whose irregular practices had become a byword, The senate declined to admit Tanlongo, whom Giolitti, in consequence of an interpellation in parliament upon the condition of the Banca Romana, was obliged to arrest and prosecute. During the prosecution Giolitti abused his position as premier to abstract documents bearing on the case.

Simultaneously a parliamentary commission of inquiry investigated the condition of the state banks. Its report, though acquitting Giolitti of personal dishonesty, proved disastrous to his political position, and obliged him to resign. His fall left the finances of the state disorganized, the pensions fund depleted, diplomatic relations with strained in consequence of the massacre of Italian workmen at , and and the in a state of revolt, which he had proved impotent to suppress.

After his resignation Giolitti was impeached for abuse of power as minister, but the Constitutional Court quashed the impeachment by denying the competence of the ordinary tribunals to judge ministerial acts. For several years he was compelled to play a passive part, having lost all credit. But by keeping in the background and giving public opinion time to forget his past, as well as by parliamentary intrigue, he gradually regained much of his former influence. He made capital of the Socialist agitation and of the repression to which other statesmen resorted, and gave the agitators to understand that were he premier they would be allowed a free hand. Thus he gained their favour, and on the fall of the Pelloux cabinet in 1900 he became minister of the Interior in Zanardelli's administration, of which he was the real head.

His policy of never interfering in strikes and leaving even violent demonstrations undisturbed at first proved successful, but indiscipline and disorder grew to such a pitch that Zanardelli, already in bad health, resigned, and Giolitti succeeded him as prime minister (November 1903). But during his second tenure as Prime Minister (1903-1905) he, too, had to resort to strong measures in repressing some serious disorders in various parts of Italy, and thus he lost the favour of the Socialists. In March 1905, feeling himself no longer secure, he resigned, indicating Fortis as his successor. When Sonnino became premier in February 1906, Giolitti did not openly oppose him, but his followers did, and Sonnino was defeated in May, Giolitti becoming Prime Minister once more (1906-1909). Giolitti returned to office as Italian Prime Minister from 1911 to 1914. During this time, he bowed to nationalist pressure and fought the controversial which made an Italian colony. He opposed Italy's entry into in 1915 on the grounds that Italy was militarily unprepared. He became Prime Minister for the last time from 1920-1921 during Italy's "red years," when fear of a communist takeover led the political establishment to tolerate the rise of the fascists. Giolitti enjoyed the support of the fascist squadristi and did not try to stop their forceful takeovers of city and regional government or their violence against their political opponents. When Mussolini marched on Rome, Giolitti was on vacation in France and no longer prime minister. He supported Mussolini's government initially, sharing the widespread hope of that the fascists would become a more moderate and responsible party upon taking power, but withdrew his support in 1924. He remained in Parliament until his death in 1928.

, the post-War leftist politician, is his grandson.

Under Giovanni Giolitti's reign several policies of government intervention were enacted. Besides putting in place several , subsidies and government projects, he also nationalized the private phone and railroad operators. Liberal proponents of criticized the "Giolittian System". Giolitti himself saw the development of the "national economy" as essential in the "production of wealth."