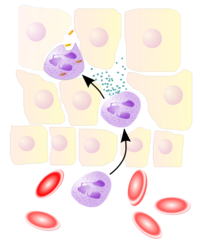 Leukocyte extravasation is the movement of leukocytes out of the circulatory system, towards the site of tissue damage or infection. This process forms part of the innate immune response, involving the recruitment of non-specific leukocytes. Monocytes also use this process in the absence of infection or tissue damage during their development into macrophages.

Leukocyte extravasation occurs mainly in post-capillary venules, where haemodynamic shear forces are minimised. This process can be understood in several steps, outlined below as "chemoattraction", "rolling adhesion", "tight adhesion" and "(endothelial) transmigration". It has been demonstrated that leukocyte recruitment is halted whenever any of these steps is suppressed.

Upon recognition of and activation by pathogens, resident macrophages in the affected tissue release cytokines such as IL-1, TNFα and chemokines. IL-1 and TNFα cause the endothelial cells of blood vessels near the site of infection to express cellular adhesion molecules, including selectins. Circulating leukocytes are localised towards the site of injury or infection due to the presence of chemokines.

Like velcro, carbohydrate ligands on the circulating leukocytes bind to selectin molecules on the inner wall of the vessel, with marginal affinity. This causes the leukocytes to slow down and begin rolling along the inner surface of the vessel wall. During this rolling motion, transitory bonds are formed and broken between selectins and their ligands.

At the same time, chemokines released by macrophages activate the rolling leukocytes and cause surface integrin molecules to switch from the default low-affinity state to a high-affinity state. This is assisted through juxtacrine activation of integrins by chemokines and soluble factors released by endothelial cells. In the activated state, integrins bind tightly to complementary receptors expressed on endothelial cells, with high affinity. This causes the immobilisation of the leukocytes, despite the shear forces of the ongoing blood flow.

Suppressed expression of some selectins results in a slower immune response. If L-selectin is not produced, the immune response may be ten times slower, as P-selectins (which can also be produced by leukocytes) bind to each other. P-selectins can bind each other with high affinity, but occur less frequently because the receptor-site density is lower than with the smaller E-selectin molecules. This increases the initial leukocyte rolling speed, prolonging the slow rolling phase.

Cellular activation via extracellular chemokines causes pre-formed β2 integrins to be released from cellular stores. Integrin molecules migrate to the cell surface and congregate in high-avidity patches. Intracellular integrin domains associate with the leukocyte cytoskeleton, via mediation with cytosolic factors such as talin, α-actinin and vinculin. This association causes a conformational shift in the integrin's tertiary structure, allowing ligand access to the binding site. Divalent cations (e.g. Mg2+) are also required for integrin-ligand binding.

Extravasation is regulated by the background cytokine environment produced by the inflammatory response, and is independent of specific cellular antigens. Cytokines released in the initial immune response induce vasodilation and lower the electrical charge along the vessel's surface. Blood flow is slowed, facilitating intermolecular binding.

Leukocyte adhesion deficiency (LAD) is a genetic disease associated with a defect in the leukocyte extravasation process, caused by a defective integrin β2 chain (found in LFA-1 and Mac-1). This impairs the ability of the leukocytes to stop and undergo diapedesis. People with LAD suffer from recurrent bacterial infections and impaired wound healing. Neutrophilia is a hallmark of LAD.