Nitric oxide
Not to be confused with nitrous oxide or nitrogen oxides.
For other uses, see NO (disambiguation).

Nitric oxide, also known as nitrogen monoxide, is a diatomic molecule with chemical formula NO. It is a free radical[2] and is an important intermediate in the chemical industry. Nitric oxide is a by-product of combustion of substances in the air, as in automobile engines, fossil fuel power plants, or lightning.

In mammals including humans, NO is an important cellular signaling molecule involved in many physiological and pathological processes.[3] Low levels of NO production are important in protecting an organ such as the liver from ischemic damage. Chronic expression of NO is associated with various carcinomas and inflammatory conditions including juvenile diabetes, multiple sclerosis, arthritis and ulcerative colitis.[citation needed]

Nitric oxide should not be confused with nitrous oxide (N2O), an anaesthetic and greenhouse gas, or with nitrogen dioxide (NO2), a brown toxic gas and a major air pollutant. However, nitric oxide is rapidly oxidised in air to nitrogen dioxide. Humphrey Davy discovered this to his discomfort, when he inhaled the gas early in his career.

Despite being a simple molecule, NO is a fundamental component in the fields of neuroscience, physiology, and immunology, and was proclaimed “Molecule of the Year” in 1992.[4]

This conversion has been speculated as occurring via the ONOONO intermediate. In water, NO reacts with oxygen and water to form HNO2 or nitrous acid. The reaction is thought to proceed via the following stoichiometry:

This is a very old reaction (1898) but of interest today in NO prodrug research. Nitric oxide can also react directly with sodium methoxide, forming sodium formate and nitrous oxide.[6] 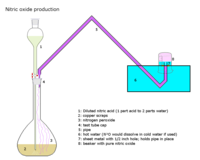 The uncatalyzed endothermic reaction of O2 and N2, which is performed at high temperature (>2000 °C) by lightning has not been developed into a practical commercial synthesis (see Birkeland–Eyde process):

In the laboratory, nitric oxide is conveniently generated by reduction of nitric acid with copper:

or by the reduction of nitrous acid in the form of sodium nitrite or potassium nitrite:

The iron(II) sulfate route is simple and has been used in undergraduate laboratory experiments.

So-called NONOate compounds are also used for NO generation.

NO reacts with all transition metals to give complexes called metal nitrosyls. The most common bonding mode of NO is the terminal linear type (M-NO). The angle of the M-N-O group varies from 160° to 180° but is still termed "linear". In this case, the NO group is considered a 3-electron donor under the covalent (neutral) method of electron counting, or a 2-electron donor under the ionic method.[7] In the case of a bent M-N-O conformation, the NO group can be considered a one-electron donor using neutral counting, or a 2-electron donor using ionic counting.[8] One can view such complexes as derived from NO+, which is isoelectronic with CO.

Nitric oxide can serve as a one-electron pseudohalide. In such complexes, the M-N-O group is characterized by an angle between 120° and 140°.

The NO group can also bridge between metal centers through the nitrogen atom in a variety of geometries.

Other methods of testing include electroanalysis (amperometric approach), where NO reacts with an electrode to induce a current or voltage change. The detection of NO radicals in biological tissues is particularly difficult due to the short lifetime and concentration of these radicals in tissues. One of the few practical methods is spin trapping of nitric oxide with iron-dithiocarbamate complexes and subsequent detection of the mono-nitrosyl-iron complex with electron paramagnetic resonance (EPR).[10][11]

A group of fluorescent dye indicators that are also available in acetylated form for intracellular measurements exist. The most common compound is 4,5-diaminofluorescein (DAF-2).[4]

From a thermodynamic perspective, NO is unstable with respect to O2 and N2, although this conversion is very slow at ambient temperatures in the absence of a catalyst. Because the heat of formation of NO is endothermic, its synthesis from molecular nitrogen and oxygen requires elevated temperatures above 1000 °C. A major natural source is lightning. The use of internal combustion engines has drastically increased the presence of nitric oxide in the environment. One purpose of catalytic converters in cars is to minimize NO emission by catalytic reversion to O2 and N2.

Nitric oxide in the air may convert to nitric acid, which has been implicated in acid rain. Furthermore, both NO and NO2 participate in ozone layer depletion. Nitric oxide is a small highly diffusible gas and a ubiquitous bioactive molecule.

Although NO has relatively few direct uses, it is produced on a massive scale as an intermediate in the Ostwald process for the synthesis of nitric acid from ammonia. In 2005, the US alone produced 6 million metric tons of nitric acid.[12] It finds use in the semiconductor industry for various processes. In one of its applications it is used along with nitrous oxide to form oxynitride gates in CMOS devices.

NO is one of the few gaseous signaling molecules known and is additionally exceptional due to the fact that it is a radical gas. It is a key vertebrate biological messenger, playing a role in a variety of biological processes. Nitric oxide, known as the 'endothelium-derived relaxing factor', or 'EDRF', is biosynthesized endogenously from L-arginine, oxygen and NADPH by various nitric oxide synthase (NOS) enzymes. Reduction of inorganic nitrate may also serve to make nitric oxide. The endothelium (inner lining) of blood vessels uses nitric oxide to signal the surrounding smooth muscle to relax, thus resulting in vasodilation and increasing blood flow. Nitric oxide is highly reactive (having a lifetime of a few seconds), yet diffuses freely across membranes. These attributes make nitric oxide ideal for a transient paracrine (between adjacent cells) and autocrine (within a single cell) signaling molecule.[13] The production of nitric oxide is elevated in populations living at high altitudes, which helps these people avoid hypoxia by aiding in pulmonary vasculature vasodilation. Effects include vasodilatation, neurotransmission (see gasotransmitters), modulation of the hair cycle,[14] production of reactive nitrogen intermediates and penile erections (through its ability to vasodilate). Nitroglycerin and amyl nitrite serve as vasodilators because they are converted to nitric oxide in the body. The vasodialating antihypertensive drug minoxidil contains an NO moity and may act as an NO agonist. Similarly, Sildenafil citrate, popularly known by the trade name Viagra, stimulates erections primarily by enhancing signaling through the nitric oxide pathway in the penis.

Nitric oxide (NO) contributes to vessel homeostasis by inhibiting vascular smooth muscle contraction and growth, platelet aggregation, and leukocyte adhesion to the endothelium. Humans with atherosclerosis, diabetes, or hypertension often show impaired NO pathways.[15] A high salt intake was demonstrated to attenuate NO production, although bioavailability remains unregulated.[16]

Nitric oxide is also generated by phagocytes (monocytes, macrophages, and neutrophils) as part of the human immune response. Phagocytes are armed with inducible nitric oxide synthase (iNOS), which is activated by interferon-gamma (IFN-γ) as a single signal or by tumor necrosis factor (TNF) along with a second signal.[17] On the other hand, transforming growth factor-beta (TGF-β) provides a strong inhibitory signal to iNOS, whereas interleukin-4 (IL-4) and IL-10 provide weak inhibitory signals. In this way the immune system may regulate the armamentarium of phagocytes that play a role in inflammation and immune responses. Nitric oxide secreted as an immune response is as free radicals and is toxic to bacteria; the mechanism for this includes DNA damage[18][19][20] and degradation of iron sulfur centers into iron ions and iron-nitrosyl compounds.[21] In response, however, many bacterial pathogens have evolved mechanisms for nitric oxide resistance.[22] Because nitric oxide might serve as an inflammometer in conditions like asthma, there has been increasing interest in the use of exhaled nitric oxide as a breath test in diseases with airway inflammation. Reduced levels of exhaled NO have been associated with exposure to air pollution.[23]

Nitric oxide can contribute to reperfusion injury when an excessive amount produced during reperfusion (following a period of ischemia) reacts with superoxide to produce the damaging oxidant peroxynitrite. In contrast, inhaled nitric oxide has been shown to help survival and recovery from paraquat poisoning, which produces lung tissue–damaging superoxide and hinders NOS metabolism.

In plants, nitric oxide can be produced by any of four routes: (i) L-arginine-dependent nitric oxide synthase,[24][25][26] (although the existence of animal NOS homologs in plants is debated),[27] (ii) by plasma membrane-bound nitrate reductase, (iii) by mitochondrial electron transport chain, or (iv) by non-enzymatic reactions. It is a signaling molecule, acts mainly against oxidative stress and also plays a role in plant pathogen interactions. Treating cut flowers and other plants with nitric oxide has been shown to lengthen the time before wilting.[28]

An important biological reaction of nitric oxide is S-nitrosylation, the conversion of thiol groups, including cysteine residues in proteins, to form S-nitrosothiols (RSNOs). S-Nitrosylation is a mechanism for dynamic, post-translational regulation of most or all major classes of protein.

There are several mechanisms by which NO has been demonstrated to affect the biology of living cells. These include oxidation of iron-containing proteins such as ribonucleotide reductase and aconitase, activation of the soluble guanylate cyclase, ADP ribosylation of proteins, protein sulfhydryl group nitrosylation, and iron regulatory factor activation.[29] NO has been demonstrated to activate NF-κB in peripheral blood mononuclear cells, an important transcription factor in iNOS gene expression in response to inflammation.[30] It was found that NO acts through the stimulation of the soluble guanylate cyclase, which is a heterodimeric enzyme with subsequent formation of cyclic GMP. Cyclic GMP activates protein kinase G, which causes phosphorylation of myosin light chain phosphatase, and therefore inactivation of myosin light-chain kinase, and leads ultimately to the dephosphorylation of the myosin light chain, causing smooth muscle relaxation.[31]

Neonatal and pediatric use

Nitric oxide/oxygen blends are used in critical care to promote capillary and pulmonary dilation to treat primary pulmonary hypertension in neonatal patients[32][33] post-meconium aspiration and related to birth defects. These are often a last-resort gas mixture before the use of extracorporeal membrane oxygenation (ECMO). Nitric oxide therapy has the potential to significantly increase the quality of life and, in some cases, save the lives of infants at risk for pulmonary vascular disease.[34]

Nitric oxide is considered an antianginal drug: it causes vasodilation, which can help with ischemic pain, known as angina, by decreasing the cardiac workload. By dilating (expanding) the veins, nitric oxide drugs lower arterial pressure and left ventricular filling pressure.[35] This vasodilation does not decrease the volume of blood the heart pumps, but rather it decreases the force the heart muscle must exert to pump the same volume of blood. Nitroglycerin pills, taken sublingually (under the tongue), are used to prevent or treat acute chest pain. The nitroglycerin reacts with a sulfhydryl group (–SH) to produce nitric oxide, which eases the pain by causing vasodilation. Recent evidence suggests that nitrates may be beneficial for treatment of angina due to reduced myocardial oxygen consumption both by decreasing preload and afterload and by some direct vasodilation of coronary vessels.[35]

Mainly for its utility as a vasodilator, NO has entered the fitness industry as an array of supplements geared towards accelerated muscle growth and prolonged stamina during endurance activities.