/blɛfərˈaɪtɨs/ blef-ər-eye-tis) is an ocular condition characterized by chronic inflammation of the eyelid, the severity and time course of which can vary. Onset can be acute, resolving without treatment within 2–4 weeks (this can be greatly reduced with lid hygiene), but more generally is a long standing inflammation varying in severity. It may be classified as seborrhoeic, staphylococcal, mixed, posterior or meiobomitis, or parasitic.[citation needed]

Signs and symptoms that are associated with the chronic inflammation can be:

Common signs and symptoms of blepharitis also include itching, irritation and burning as well as a foreign body sensation.[1] Some patients experience eye dryness, which can cause a certain degree of discomfort.

People who wear contact lenses usually have more trouble in coping with their symptoms because although they need contact-lenses, they cannot wear them. Many such patients complain of being unable to wear their lenses for long periods of time or that the lenses are causing them even more irritation of the eye.

Also, the lids may become red and may have ulcerative, non-healing areas which may actually bleed.[2] Blepharitis does not tend to cause problems with the patient's vision whatsoever, but due to a poor tear film, one may experience blurred vision.

Eye redness and swelling tend to appear in more advanced cases, and they are rarely primary symptoms. The symptoms can slightly vary based on the exact cause of the condition. Blepharitis due to an allergy can cause dark lids, symptom which is known as "allergic shiner" and which tends to be more frequent in children rather than adults. Infectious blepharitis is accompanied by a yellow- or green-colored discharge which is more abundant in the morning and which leads to stuck lids. Blepharitis may also cause eyelid matting or "gluing" of the lashes. Not least, dandruff may occur on the scalp or on the eyebrows.

Other blepharitis symptoms include sensitivity to light, eyelashes that grow abnormally or even loss of eyelashes.[3] Also, the tears might seem frothy or bubbly in nature and mild scarring might occur to the eyelids. The symptoms and signs of blepharitis are often erroneously ascribed by the patient as being due to "recurrent conjunctivitis".[4]

Blepharitis that localizes in the skin of the eyelids may cause styes or chalazia, which appear like red bumps, sometimes with a yellow spot if infection is present. Although pain is not common among blepharitis symptoms, if the condition persists or becomes painful, the individual is recommended to seek medical attention.[5]

Chronic blepharitis may result in damage of varying severity which may have a negative effect upon vision and therefore upon the eyeglass prescription.[2]

Infectious blepharitis can cause hard crusts around the eyelashes which leave small ulcers that may bleed or ooze after cleaning.

As a general rule, blepharitis symptoms which do not improve, despite good hygiene consisting of proper cleaning and care of the eye area, should be referred to a doctor.

Staphylococcal blepharitis is a more severe condition which may start in childhood and continue through adulthood.[8] It is commonly recurrent and it requires special medical care. The prevalence of Staphylococcus aureus in the conjunctival sac and on the lid margin varies among countries, apparently according to climate.[9]

In cases of blepharitis caused by Staphylococcus aureus, the presence of a collarette (a ring-like formation around the lash shaft) can be observed.[10] This is the main sign of this particular condition. Other specific symptoms include loss of eyelashes or broken eyelashes.

Staphylococcal blepharitis is mainly diagnosed upon the patient's medical history and a bacterial culture. However, since blepharitis is a condition that is completely understood, diagnosis usually consists of establishing an accurate medical history of the patient and a proper physical examination. Blepharitis is diagnosed primarily upon physical examination and rarely further tests are needed. Yet, it is recommended that older patients or those who are at risk of developing certain skin conditions undergo biopsy in order to remove the possibility of tumor.

This type of blepharitis is more likely to occur in individuals who are exposed to bacteria. Staphylococcal blepharitis, unlike the other types of this condition, seems to be seen more frequently in women than men.

It is important that this type of blepharitis is properly treated because otherwise the infection may spread to other parts of the eye or to the scarring of the cornea. Staphylococcal blepharitis is normally treated with antibiotics such as Chloramphenicol ointment. Fusidic acid is usually the choice of antibiotics in cases when Chloramphenicol is contraindicated. Antibiotics are given for at least four weeks and up to six weeks, which is considered enough so the infection is completely cured. Also, blepharitis treatment includes a short course of topical steroids which are administered to control the inflammation.

Staphylococcal blepharitis, along with the other types of blepharitis treatment is only effective if given at the same time with extra cautious eyelid hygiene. This consists of eyelid proper cleaning and removing crusts and debris and maintaining the hygiene by avoiding expired make up or cosmetics that are used around the eye. Particularly in blepharitis caused by S. aureus, patients are recommended to keep the eyelids area clean to avoid spreading the infection when oozing and bleeding occur. 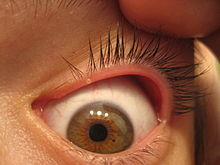 The most common type of blepharitis is often found in people with a Rosacea skin type.[citation needed] The oil glands in the lid of rosacea sufferers secrete a modified oil which leads to inflammation at the meibomian gland openings which are found at the edge of the lid.[citation needed]

The single most important treatment principle is a daily routine of lid margin hygiene, as described below. Such a routine needs to be convenient enough to be continued for life to avoid relapses as blepharitis is often a chronic condition. But it can be acute, and one episode does not mean it is a life-long condition.

An alternative after washing is to coat the eyelids with a good quality hair conditioner.[citation needed] Leave in place for several minutes then rinse. The conditioner seems to break the bacteria / crusting /irritation cycle, and daily use can eliminate the symptoms.[citation needed]

The following guide is very common but is more challenging to perform by visually disabled or frail patients as it requires good motor skills and a mirror. Compared with the above, it does not bear any advantages:

Often the above is advised together with mild massage to mechanically empty glands located at the lid margin (Meibomian glands, Zeis glands, Moll glands).[11]

Small studies have shown N-acetylcysteine supplementation to be of benefit to sufferers of blepharitis.[13]