Cloud County (county code CD) is a county located in North Central Kansas, in the Central United States. As of the 2010 census, the county population was 9,533.[1] Its county seat and most populous city is Concordia.[2]

Cloud County was formed from the existing Washington County, Kansas in a joint convention with Republic and Cloud counties. The county was legally organized on September 6, 1866 with Elk Creek designated as the temporary county seat.[4]

In 1887, Atchison, Topeka and Santa Fe Railway built a branch line from Neva (3 miles west of Strong City) to Superior, Nebraska. This branch line connected Strong City, Neva, Rockland, Diamond Springs, Burdick, Lost Springs, Jacobs, Hope, Navarre, Enterprise, Abilene, Talmage, Manchester, Longford, Oak Hill, Miltonvale, Aurora, Huscher, Concordia, Kackley, Courtland, Webber, Superior. At some point, the line from Neva to Lost Springs was pulled but the right of way has not been abandoned. This branch line was originally called "Strong City and Superior line" but later the name was shortened to the "Strong City line". In 1996, the Atchison, Topeka and Santa Fe Railway merged with Burlington Northern Railroad and renamed to the current BNSF Railway. Most locals still refer to this railroad as the "Santa Fe".

Following amendment to the Kansas Constitution in 1986, the county remained a prohibition, or "dry", county until 1998, when voters approved the sale of alcoholic liquor by the individual drink with a 30% food sales requirement.[5]

Cloud County is bisected from north to south by U.S. Route 81, which runs through the town of Concordia and connects north to Belleville, Kansas or south to Salina, Kansas. The southern part of the county also has U.S. Route 24, connecting Clay Center, Kansas from the east and Beloit, Kansas to the west. 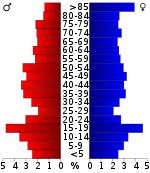 Cloud County is divided into eighteen townships. The city of Concordia is considered governmentally independent and is excluded from the census figures for the townships. In the following table, the population center is the largest city (or cities) included in that township's population total, if it is of a significant size.