Miami County (county code MI) is a county located in East Central Kansas, in the Central United States. As of the 2010 census, the county population was 32,787.[1] Its county seat and most populous city is Paola.[2] Miami County is a part of the Kansas City Metropolitan Area.

The first settlements of the area were by native American Indian tribes, primarily in the 1820s through the 1840s. This was due to their removal from areas east (Ohio, Illinois and Indiana)and the designation of the area as part of the Indian Territory. The tribes included were the Miami and Shawnee, and the Pottawatomie, Piankeshaw, Kaskaskia, Wea and Peoria, which comprised the Confederated Tribes. The original Miami reservation consisted of approximately 500,000 acres (2,000 km2). Early white settlers during that time were primarily serving as missionaries to the tribes. Over time, other settlers continued to arrive to build homes on the Miami reservation, and by 1854, the U.S. Government purchased all but 72,000 acres (290 km2) from the Miami tribe.[citation needed]

Two notable members of the Confederated Tribes were Christmas Dagnette, and Baptiste Peoria. Dagnette was born in 1800, and was a nephew of a Wea chief, originally from Indiana. He had received some formal education, spoke several of the native American languages, and additionally spoke English, French and Spanish. He had served as an interpreter to the U.S. Government by the age of sixteen. Having moved to the area that is now Miami County with the Wea tribe, he served as chief for several years before his death in 1848. Baptiste Peoria was also born around 1800, and while he didn't receive formal education like Dagnette, he learned the languages of the Shawnee, Delaware, Pottawatomie, and several more of the Confederated Tribes. In addition, he spoke English and French.[3] Peoria was of both French and native American Indian ethnicity, and like Dagnette, served as an interpreter and as a chief for some time. Baptiste Peoria became a respected member of the Paola Town Company, and was instrumental in the founding and development of the city of Paola in the early and mid 1860's. He moved (to what is now Oklahoma) with his tribe in 1868, when they were once again removed to a newly designated Indian territory, and died there in 1878. Some of the native American Indians stayed in the area (Miami County), and became citizens of the United States.[4]

When Kansas Territory was incorporated in 1854 due to the Kansas-Nebraska Act,the Missouri Compromise of 1820 was essentially repealed. Bordering the slave state of Missouri to its east, the county (Miami) and surrounding areas became a location for violence between abolitionists and the "Border Ruffians" of Missouri. These acts of violence and battles that took place primarily from 1854–1858, became known as border wars, and Kansas became known as Bleeding Kansas. Kansas Territory was not yet a state, and it was a battle on which forces would become dominant, slave or free. Many abolitionists came from other states to live in the area and ensure Kansas' entry as a state as a free, or anti-slavery one. The county's most notable abolitionist was John Brown, who moved to Osawatomie,making it the headquarters for he and his anti-slavery forces. As a result of this, Osawatomie, as well as the surrounding countryside and communities became the center for several battles and acts of violence during this period.[3]

The county was originally established in 1855 as Lykins County, after Dr. David Lykins. Lykins was a Baptist missionary to the Native American Indian tribes in the area, and had built a school for them in what is now rural Miami County. He also served as a member of the territorial council, and was pro-slavery. By January 1861, the anti-slavery forces had been established as dominant, and Kansas entered the union as a free state. As a result of Dr. Lykins' views on slavery, Lykins County's name was changed to Miami County on June 3, 1861. The new name was in honor of the predominant Native American tribe that settled the area, the Miami.[5]

In 1882, a large deposit of natural gas was discovered in rural Miami County, 7 miles (11 km) east of Paola. By 1886 a pipeline was completed to the town's square, where it illuminated lamps there. By 1887, Paola had its street lamps lighted with lamps using natural gas. Other fields of natural gas were discovered throughout Miami County by 1887, and for a time, the area around Paola was considered to be a gas belt. In the summer of 1887, a Natural Gas Jubilee was held, which was a celebration for people to come and marvel at the use of natural gas.[3]

The location of Miami County, a short drive south of Kansas City,allows it to offer residents and visitors aspects of both city and rural lifestyles. Miami County and its cities, Paola, Louisburg, Spring Hill, Osawatomie, and Fontana offer a variety of activities and hobbies. Among them are golf, hiking, camping, fishing, hunting, horseback riding, water sports, astronomy and a variety of community festivals and events that take place throughout the year. There are also historical places and museums to study its history.[4]

In the spring of each year, various Miami County farms and farm businesses participate in the Miami County Farm Tour. The public is invited to come to each farm with their families as part of a free self-guided driving tour. The goal is to experience and learn about the operations, produce and/or animals at each farm stop. Visitors, and residents from Miami County, have made the farm tour an annual event.[4]

Other lakes in Miami County, each with specific restrictions and activities to offer, include: 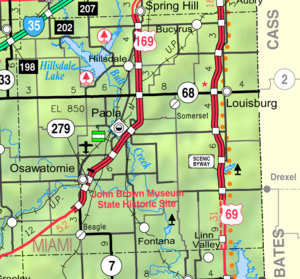 Miami County was a prohibition, or "dry", county until the Kansas Constitution was amended in 1986 and voters approved the sale of alcoholic liquor by the individual drink with a 30% food sales requirement.[7] 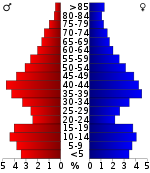 Miami County is divided into thirteen townships. The cities of Louisburg, Osawatomie, Paola, and Spring Hill are considered governmentally independent and are excluded from the census figures for the townships. In the following table, the population center is the largest city (or cities) included in that township's population total, if it is of a significant size.