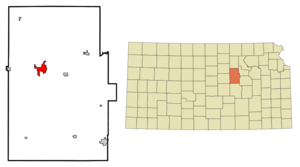 Abilene began as a stage coach stop in 1857, established by Timothy Hersey and Eliza Hersey and named from a passage in the Bible, meaning "city of the plains." The town grew quickly when Joseph G. McCoy decided to use the town for the location of his stockyards.

With the railroad pushing west and the cattle traders soon used Abilene as the largest stockyards west of Kansas City. The ended in Abilene and brought in many travelers and made Abilene one of the wildest towns in the west.

Town Tom "Bear River" Smith was initially successful policing Abilene, often using only his bare hands. He survived two attempts during his tenure. However, he was murdered and on November 2, 1870. Smith wounded one of his two attackers during the shootout preceding his death, and both suspects received for the offense. He was replaced by in April of 1871. Hickock's time as marshal was short lived. While standing off a crowd during a street brawl, took two shots at Hickock, who returned fire killing Coe, but then accidentally shot his friend and deputy, [http://www.odmp.org/officer.php?oid=16507 Mike Williams] , who was coming to his aid. He lost his job two months later in December.

In 1880 built what the newspapers called the finest house west of Topeka. Lebold was one of the early town developers and Bankers from 1869 through 1889. The Hersey dugout can still be seen in the cellar of the .

In 1890, Dr. A.B. Seelye founded the A.B. Seelye Medical Company. Seelye developed over 100 products for the company including "Wasa-Tusa," an Indian name meaning "to heal".

Abilene became home to when his family moved to Abilene from Denison, in 1892 where he attended elementary school through high school. The Dwight D. Eisenhower Presidential Library is located in Abilene. It is now the burial site of President Eisenhower, his wife, Mamie, and one son.

* and the Dwight D. Eisenhower Presidential Library and Museum [http://www.eisenhower.utexas.edu/]
* National Register Property listed in 1973. Built in 1880 in the Italianate Tuscan villa style. Today this decorative arts museum is home to one of the finest collections of American Victorian antiques and artifacts. [http://www.lebold-mansion.com/]
* Greyhound Hall of Fame
* Hall of Generals - A wax museum of figures of generals from
* Old Abilene Town and Museum - A replica of a part of old Abilene. [http://www.oldabilenetownks.com/]
* Seelye Mansion and Museum - A Georgian style mansion built in 1905 at a cost of $55,000. The 25 room mansion contains the original furniture and Edison light fixtures. The Patent Medicine Museum contains many artifacts of the A.B. Seelye Medical Company. [http://www.seelyemansion.com/]
* Heritage Center of Dickinson County - Two museums including the Historical Museum and the Museum of Independent Telephony. The Museum of Independent Telephony tells the story of C.L. Brown, whose independent grew to become the telecommunications company known today as [http://www.heritagecenterdk.com/museum_of_independent_telephony.html] . [http://www.heritagecenterdk.com/]
* Great Plains Theatre - Originally First Presbyterian Church, built in 1881, Landmarked, and is now a live professional theatre. www.greatplainstheatre.com

The area receives nearly convert|33|in|mm of precipitation during an average year with the largest share being received in May and June—which when combined average 20 days of measurable precipitation. During a typical year the total amount of precipitation may be anywhere from 22 to convert|44|in|mm. There are on average 79 days of measurable precipitation per year. Winter snowfall averages about 14 inches, but the median is less than convert|10|in|mm. Measurable snowfall occurs an average of 7 days per year with at least an inch of snow being received on five of those days. Snow depth of at least an inch occurs an average of 11 days per year.

There were 2,836 households out of which 29.0% had children under the age of 18 living with them, 50.5% were married couples living together, 9.0% had a female householder with no husband present, and 37.5% were non-families. 34.2% of all households were made up of individuals and 17.2% had someone living alone who was 65 years of age or older. The average household size was 2.27 and the average family size was 2.90.

The Greyhound Hall of Fame is located straight across from the Eisenhower Presidential Library. It contains exhibits on the breed of , the history of greyhounds, the racing of greyhounds, and the chance to meet some retired greyhounds.. Abilene has been called the greyhound capital of the world.

Old Abilene town is a historical part of the city. It contains original buildings from the 1800s that have been restored. It showcases live performances from Memorial Day Weekend through Labor Day Weekend. There are currently plans to renovate and expand this tourist destination.

The Seelye Mansion is one of the largest homes in Abilene. It has been converted into a museum for Dr. Seelye.

Noted Residents (past and present)