McPherson County (standard abbreviation: MP) is a county located in the U.S. state of Kansas. As of the 2010 census, the county population was 29,180.[1] The largest city and county seat is McPherson. The county is named for Civil War General James B. McPherson. The McPherson Micropolitan Statistical Area includes all of McPherson County.

As early as 1875, city leaders of Marion held a meeting to consider a branch railroad from Florence. In 1878, Atchison, Topeka and Santa Fe Railway and parties from Marion County and McPherson County chartered the Marion and McPherson Railway Company.[2] In 1879, a branch line was built from Florence to McPherson, in 1880 it was extended to Lyons, in 1881 it was extended to Ellinwood.[3] The line was leased and operated by the Atchison, Topeka and Santa Fe Railway. The line from Florence to Marion, was abandoned in 1968.[4] In 1992, the line from Marion to McPherson was sold to Central Kansas Railway. In 1993, after heavy flood damage, the line from Marion to McPherson was abandoned. The original branch line connected Florence, Marion, Canada, Hillsboro, Lehigh, Canton, Galva, McPherson, Conway, Windom, Little River, Mitchell, Lyons, Chase, Ellinwood.

The National Old Trails Road, also known as the Ocean-to-Ocean Highway, was established in 1912, and was routed through Windom, Conway, McPherson.

Following amendment to the Kansas Constitution in 1986, the county remained a prohibition, or "dry", county until 1996, when voters approved the sale of alcoholic liquor by the individual drink with a 30% food sales requirement.[6] 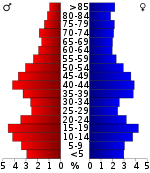 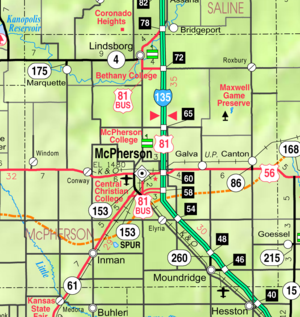 McPherson County is divided into twenty-five townships. The cities of Lindsborg and McPherson are considered governmentally independent and are excluded from the census figures for the townships. In the following table, the population center is the largest city (or cities) included in that township's population total, if it is of a significant size.

Windom, Kansas in McPherson County during the early 20th century