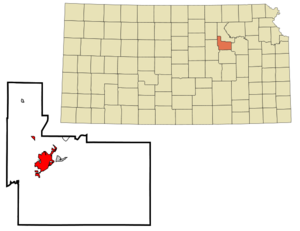 Junction City is part of the Micropolitan Statistical Area.

The area receives over convert|32|in|mm of precipitation during an average year with the largest share being received during May, June, and July—with a combined 29 days of measurable precipitation. During a typical year the total amount of precipitation may be anywhere from 23 to convert|43|in|mm. There are on average 86 days of measurable precipitation per year. Winter snowfall averages less than convert|14|in|mm, but the median is just over convert|7|in|mm. Measurable snowfall occurs an average of 6 days per year with at least an inch of snow being received on four of those days. Snow depth of at least an inch occurs an average of 17 days per year.

Mick Wunder is Junction City's mayor. Terry Heldstab and Jack Taylor used to be the mayor.

Of the 3.83% Asian, 1.84% are of n descent. This is significantly higher than the surrounding area.

There were 7,492 households out of which 35.7% had children under the age of 18 living with them, 49.8% were married couples living together, 14.6% had a female householder with no husband present, and 32.2% were non-families. 26.4% of all households were made up of individuals and 9.1% had someone living alone who was 65 years of age or older. The average household size was 2.49 and the average family size was 3.00.

Part of the reason for the population decline was because the Army took away the 1st Infantry Division from nearby Fort Riley. It has been brought back there so the population is growing now.

As of recently, the city has been experiencing a major growth due to the return of the 1st Infantry Division to Fort Riley. Several thousand housing units are currently under construction or completed within numerous new subdivisions. There are also plans for a convert|300|acre|km2|1|sing=on shopping, dining, and sports complex along Interstate 70 on the southern end of town. This area will be known as Smoky Hill Marketplace and will consist of convert|600000|sqft|m2|-4 of retail space, several restaurants, a 4000-seat arena, 13 multipurpose fields, and several baseball diamonds. The name for this area was decided due to its location just on the other side of the Smoky Hill River from town. In addition, several major technology and call centers have plans for major offices within the city limits.

As of early 2008, the Smokey Hill Project is on hold and is likely to never come to life.

Timothy McVeigh was in Junction City when he planned the attack on the federal building in Oklahoma City. He rented the truck that was used to blow up the building. McVeigh was executed for doing this.

According to the City of Junction City's Mayor's Task Force on Housing:

The number of 1,646 includes all the rental units that we could find information from. That is the total units less the 5% for vacancy or 82 or less units that could be vacantThere are approximately 1,093 units that are being built or in the planning stages and will start soon.Total possible rental units would than be 2,739Rental rates range from a 1-bedroom for $390.00 to a 3-bedroom for $1,475.00 per monthWe were unable to get the property managers to give us a breakdown as to what are mobile homes,single family homes and or apartments.