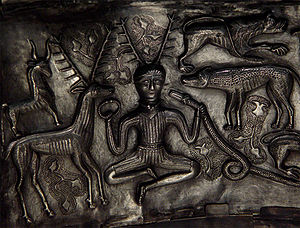 The "Cernunnos" type antlered figure on the Gundestrup Cauldron.

Cernunnos is the conventional name given in Celtic studies to depictions of the horned god of Celtic polytheism. The name itself is only attested once, on the 1st-century Pillar of the Boatmen, but depictions of a horned or antlered figure, often seated in a "lotus position" and often associated with animals and holding or wearing torcs, are known from other instances.

Nothing is known about the god from literary sources, and details about his name, his cult or his significance in Celtic religion are unknown. Speculative interpretations identify him as a god of nature or fertility.[1] 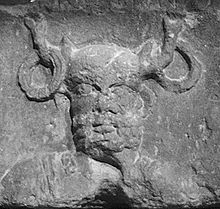 Cernunnos on the Pillar of the Boatmen

The theonym [C]ernunnos appears on the Pillar of the Boatmen, a Gallo-Roman monument dating to the early 1st century CE, to label a god depicted with stag's antlers in their early stage of annual growth.[2] Both antlers have torcs hanging from them.[3]

The name has been compared to a divine epithet Carnonos in a Celtic inscription written in Greek characters at Montagnac, Hérault (as καρνονου, karnonou, in the dative case).[4] A Gallo-Latin adjective carnuātus, "horned," is also found.[5]

The Proto-Celtic form of the theonym is reconstructed as either *Cerno-on-os[dubious – discuss] or *Carno-on-os. The augmentative -on- is characteristic of theonyms, as in Maponos, Epona, Matronae, and Sirona.[6] Maier (2010) states that the etymology of Cernunnos is unknown, as the Celtic word for "horn" has an a (as in Carnonos).[3]

Gaulish karnon "horn" is cognate with Latin cornu and Germanic *hurnaz, English horn, ultimately from Proto-Indo-European *k̑r̥no-.[7] The etymon karn- "horn" appears in both Gaulish and Galatian branches of Continental Celtic. Hesychius of Alexandria glosses the Galatian word karnon (κάρνον) as "Gallic trumpet", that is, the Celtic military horn listed as the carnyx (κάρνυξ) by Eustathius of Thessalonica, who notes the instrument's animal-shaped bell.[8] The root also appears in the names of Celtic polities, most prominent among them the Carnutes, meaning something like "the Horned Ones,"[9] and in several personal names found in inscriptions.[10]

The name Cernunnos occurs only on the "Pillar of the Boatmen" (Pilier des nautes),[11] now displayed in the Musée National du Moyen Age in Paris. Constructed by Gaulish sailors probably in 14 CE,[12] it was discovered in 1710 within the foundations of the cathedral of Notre-Dame de Paris, site of ancient Lutetia, the civitas capital of the Celtic Parisii. The distinctive stone pillar is an important monument of Gallo-Roman religion. Its low reliefs depict and label by name several Roman deities such as Jupiter, Vulcan, and Castor and Pollux, along with Gallic deities such as Esus, Smertrios, and Tarvos Trigaranus. The name Cernunnos can be read clearly on 18th century drawings of the inscriptions, but the initial letter has been obscured since, so that today only a reading [_]ernunnos can be verified[13]

Additional evidence is given by one inscription on a metal plaque from Steinsel-Rëlent in Luxembourg, in the territory of the Celtic Treveri. This inscription[14] read Deo Ceruninco, "to the God Cerunincos", assumed to be the same deity.[citation needed] The Gaulish inscription from Montagnac[15] reads αλλετ[ει]υος καρνονου αλ[ι]σο[ντ]εας (alleteiuos karnonou alisonteas), with the last word possibly a place name based on alisia, "service-tree" or "rock" (compare Alesia, Gaulish Alisiia).[16] 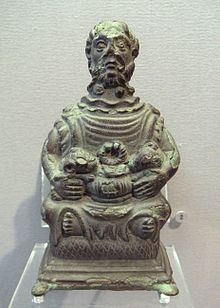 God of Etang-sur-Arroux, a possible depiction of Cernunnos. He wears a torc at the neck and on the chest. Two snakes with ram heads encircle him at the waist. Two cavities at the top of his head are probably designed to receive deer horns. Two small human faces at the back of his head indicate that he is tricephalic. Musée d'Archéologie Nationale. 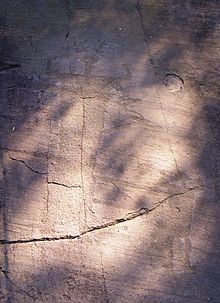 Rock carving of an antlered figure in the National park of Naquane, Italy.[17]

The god labelled [C]ernunnos on the Pillar of the Boatmen is depicted with stag's antlers in their early stage of annual growth.[2] Both antlers have torcs hanging from them. The lower part of the relief is lost, but the dimensions suggest that the god was sitting in the "Buddha position", providing a direct parallel to the antlered figure on the Gundestrup cauldron.

In spite of the name Cernunnos being attested nowhere else, it is commonly used in Celtological literature as describing all comparable depictions of horned deities.

This "Cernunnos" type in Celtic iconography is often portrayed with animals, in particular the stag, and also frequently associated with a the ram-horned serpent, besides association with other beasts with less frequency, including bulls (at Rheims), dogs, and rats. Because of his frequent association with creatures, scholars often describe Cernunnos as the "Lord of the Animals" or the "Lord of Wild Things", and Miranda Green describes him as a "peaceful god of nature and fruitfulness".[18]

The Pilier des nautes links him with sailors and with commerce, suggesting that he was also associated with material wealth as does the coin pouch from the Cernunnos of Rheims (Marne, Champagne, France)—in antiquity, Durocortorum, the civitas capital of the Remi tribe—and the stag vomiting coins from Niedercorn-Turbelslach (Luxembourg) in the lands of the Treveri. The god may have symbolised the fecundity of the stag-inhabited forest.

Other examples of "Cernunnos" images include a petroglyph in Val Camonica in Cisalpine Gaul. The antlered human figure has been dated as early as the 7th century BCE or as late as the 4th.[19] An antlered child appears on a relief from Vendeuvres, flanked by serpents and holding a purse and a torc.[20] The best known image appears on the Gundestrup cauldron found on Jutland, dating to the 1st century BC, thought to depict Celtic subject matter though usually regarded as of Thracian workmanship.

Among the Celtiberians, horned or antlered figures of the Cernunnos type include a "Janus-like" god from Candelario (Salamanca) with two faces and two small horns; a horned god from the hills of Ríotinto (Huelva); and a possible representation of the deity Vestius Aloniecus near his altars in Lourizán (Pontevedra). The horns are taken to represent "aggressive power, genetic vigor and fecundity."[21]

Divine representations of the Cernunnos type are exceptions to the often-expressed view that the Celts only began to picture their gods in human form after the Roman conquest of Gaul.[22] The Celtic "horned god", while well attested in iconography, cannot be identified in description of Celtic religion in Roman ethnography and does not appear to have been given any interpretatio romana, perhaps due to being too distinctive to be translatable into the Roman pantheon.[23] While Cernunnos was never assimilated, scholars have sometimes compared him functionally to Greek and Roman divine figures such as Mercury,[24] Actaeon, specialized forms of Jupiter, and Dis Pater, the latter of whom Julius Caesar said was considered the ancestor of the Gauls.[25]

There have been attempts to find the cern root in the name of Conall Cernach, the foster brother of the Irish hero Cuchulainn[26] in the Ulster Cycle. In this line of interpretation, Cernach is taken as an epithet with a wide semantic field — "angular; victorious; bearing a prominent growth" — and Conall is seen as "the same figure" as the ancient Cernunnos.[27]

Some see the qualities of Cernunnos subsumed into the life of Saint Ciarán of Saighir, one of the Twelve Apostles of Ireland. When he was building his first tiny cell, as his hagiograph goes, his first disciple and monk was a boar that had been rendered gentle by God. This was followed by a fox, a badger, a wolf and a stag.[28]

In Wicca and other forms of Neopaganism a Horned God is revered; this divinity syncretises a number of horned or antlered gods from various cultures, including Cernunnos. The Horned God reflects the seasons of the year in an annual cycle of life, death and rebirth.[29]

In the tradition of Gardnerian Wicca, the Horned God is sometimes specifically referred to as Cernunnos, or sometimes also as Kernunno.[30]