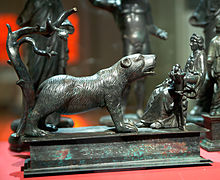 The goddess Artio as depicted in the Muri statuette group, presumably in bear and in human form.

Artio (Dea Artio in the Gallo-Roman religion) was a Celtic bear goddess. Evidence of her worship has notably been found at Bern (Switzerland) whose name according to legend is derived from the word Bär, "bear"[citation needed].

A bronze sculpture from Muri, near Bern in Switzerland shows a large bear facing a woman seated in a chair, with a small tree behind the bear. The woman seems to hold fruit in her lap, perhaps feeding the bear. (Deyts p.48, Green pp.217-218). The sculpture has a large rectangular bronze base, which bears an inscription. (CIL 13, 05160)

Her name is derived from the Gaulish word artos, bear (Delamarre 2003 p. 55-56). Other Celtic languages have similar words, such as Old Irish art, Welsh arth - which may also be the source for the modern name Arthur.