Epona
This article is about the goddess. For the character, see Epona (The Legend of Zelda). 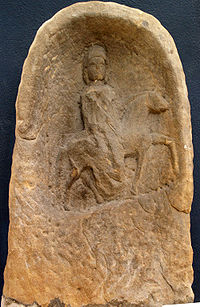 In Gallo-Roman religion, Epona was a protector of horses, donkeys, and mules. She was particularly a goddess of fertility, as shown by her attributes of a patera, cornucopia, ears of grain and the presence of foals in some sculptures[1] suggested that the goddess and her horses were leaders of the soul in the after-life ride, with parallels in Rhiannon of the Mabinogion. Unusually for a Celtic deity, most of whom were associated with specific localities, the worship of Epona, "the sole Celtic divinity ultimately worshipped in Rome itself,"[2] was widespread in the Roman Empire between the first and third centuries CE.

Etymology of the name

Although known only from Roman contexts, the name Epona, 'Great Mare' is from the Gaulish language; it is derived from the inferred proto-Celtic *ekwos 'horse'[3] — which gives rise to modern Welsh ebol 'foal' — together with the augmentative suffix -on frequently, though not exclusively, found in theonyms (for example Sirona, Matrona, and the usual Gaulish feminine singular -a.[4] In an episode preserved in a remark of Pausanias,[5] an archaic Demeter too had also been a Great Mare, who was mounted by Poseidon in the form of a stallion and foaled Arion and the Daughter who was unnamed outside the Arcadian mysteries.[6] Demeter was venerated as a mare in Lycosoura in Arcadia into historical times.

Epona and her horses, from Köngen, Germany, About 200 AD.

Fernand Benoit[7] found the earliest attestations of a cult of Epona in the Danubian provinces and asserted that she had been introduced in the limes of Gaul by horsemen from the east. This suggestion has not been generally taken up.

Although the name is in origin Gaulish, dedicatory inscriptions to Epona are in Latin or, rarely, Greek. They were made not only by Celts, but also by Germans, Romans and other inhabitants of the Roman Empire. An inscription to Epona from Mainz, Germany, identifies the dedicator as Syrian.[8] A long Latin inscription of the first century BCE, engraved in a lead sheet and accompanying the sacrifice of a filly and the votive gift of a cauldron, was found in 1887 at Rom, Deux-Sèvres, the Roman Rauranum. The inscription offers to the goddess an archaic profusion of epithets for a goddess, Eponina 'dear little Epona': she is Atanta, horse-goddess Potia 'powerful Mistress' (compare Greek Potnia), Dibonia (Latin, the 'good goddess')", Catona 'of battle', noble and good Vovesia.[9]

Her feast day in the Roman calendar was December 18 as shown by a rustic calendar from Guidizzolo, Italy,[10] although this may have been only a local celebration. She was incorporated into the Imperial cult by being invoked on behalf of the Emperor, as Epona Augusta or Epona Regina.

The supposed autonomy of Celtic civilisation in Gaul suffered a further setback with Fernand Benoit's study[11] of the funereal symbolism of the horseman with the serpent-tailed ("anguiforme") daemon, which he established as a theme of victory over death, and Epona; both he found to be late manifestations of Mediterranean-influenced symbolism, which had reached Gaul through contacts with Etruria and Magna Graecia. Benoit compared the rider with most of the riders imaged around the Mediterranean shores.

Perceptions of native Celtic goddesses had changed under Roman hegemony: only the names remained the same. As Gaul was Romanized under the early Empire, Epona’s sovereign role evolved into a protector of cavalry.[12] The cult of Epona was spread over much of the Roman Empire by the auxiliary cavalry, alae, especially the Imperial Horse Guard or equites singulares augustii recruited from Gaul, Lower Germany, and Pannonia. A series of their dedications to Epona and other Celtic, Roman and German deities was found in Rome, at the Lateran.[13] As Epane she is attested in Cantabria, northern Spain, on Mount Bernorio, Palencia.[14]

A bizarre euhemeristic account of the birth of Epona that does not reflect Celtic beliefs can be found in Plutarch's life of Solon: Giambattista Della Porta's edition of Magia naturalis (1589), a potpourri of the sensible and questionable, remarks, in the context of unseemly man-beast coupling, Plutarch's Life of Solon, in which he "reports out of Agesilaus, his third book of Italian matters, that Fulvius Stella loathing the company of a woman, coupled himself with a mare, of whom he begot a very beautiful maiden-child, and she was called by a fit name, Epona..."

A relief of Epona, flanked by two pairs of horses, from Roman Macedonia.

Sculptures of Epona fall into five types, as distinguished by Benoit: riding, standing or seated before a horse, standing or seated between two horses, a tamer of horses in the manner of potnia theron and the symbolic mare and foal. In the Equestrian type, common in Gaul, she is depicted sitting side-saddle on a horse or (rarely) lying on one; in the Imperial type (more common outside Gaul) she sits on a throne flanked by two or more horses or foals.[15] In distant Dacia, she is represented on a stela (now at the Szépmüvézeti Museum, Budapest) in the format of Cybele, seated frontally on a throne with her hands on the necks of her paired animals: her horses are substitutions for Cybele's lions.

In Roman texts and inscriptions

Epona is mentioned in The Golden Ass by Apuleius, where an aedicular niche with her image on a pillar in a stable has been garlanded with freshly picked roses.[16] In his Satires, the Roman poet Juvenal also links the worship and iconography of Epona to the area of a stable.[17] Small images of Epona have been found in Roman sites of stables and barns over a wide territory.

The probable date of ca. 1400 BCE ascribed to the giant chalk horse carved into the hillside turf at Uffington, in southern England, is too early to be directly associated with Epona a millennium and more later, but clearly represents a Bronze Age totem of some kind. The English traditional hobby-horse riders parading on May Day at Padstow, Cornwall and Minehead, Somerset, which survived to the mid-twentieth century, even though Morris dances had been forgotten, may have deep roots in the veneration of Epona, as may the English aversion to eating horsemeat.[18] At Padstow formerly, at the end of the festivities the hobby-horse was ritually submerged in the sea.[19]

A provincial though not crude small (7.5 cm high) Roman bronze of a seated Epona, flanked by a small mare and stallion, found in England,[20] is conserved in the British Museum.[21] Lying on her lap and on the patera raised in her right hand are disproportionately large ears of grain; ears of grain also protrude from the mouths of the ponies, whose heads are turned towards the goddess. On her left arm she holds a yoke, which curves up above her shoulder, an attribute unique to this bronze statuette.[22]

The Welsh goddess Rhiannon rides a white horse and has many attributes of Epona. A south Welsh folk ritual call Mari Lwyd (Grey Mare) is still undertaken in December - an apparent survival of the veneration of the goddess. The pantomime horse is thought to be a related survival.

An elf in the Japanese game Tears to Tiara is named Epona.