City of Sydney
This article is about the local government area. For the wider metropolitan area, see Sydney.

The City of Sydney coat of arms

The City of Sydney is the Local Government Area (LGA) covering the Sydney central business district and surrounding inner city suburbs of the greater metropolitan area of Sydney, Australia. The leader of the City of Sydney holds the title of the Lord Mayor of Sydney.

Suburbs within the boundaries of the City of Sydney before the merger include the actual downtown or central business district of Sydney itself, Pyrmont and Ultimo to the west, Haymarket to the south and Woolloomooloo to the east and other suburbs. On 6 February 2004, the former LGA of the City of South Sydney was formally merged into the City of Sydney.

The CBD is roughly bounded by Circular Quay and the Harbour to the north, Macquarie Street to the east, the Western Distributor to the west and Liverpool Street to the south. Suburbs within the City of South Sydney before the merger included Alexandria, Darlington (now mostly occupied by the University of Sydney), Erskineville, Newtown, Redfern, Glebe, Waterloo, Paddington.

According to the Australian Bureau of Statistics:[4]

- was, in percentage terms, an increase of 2.5% in the number of people over the year to 30 June 2010, the 9th fastest growth in population of a Local Government Area in New South Wales. In New South Wales the population grew by 1.5%

Suburbs within or partially within the City of Sydney are:

Localities in the local government area

Localities in the City of Sydney are:

Lower George Street, Sydney in about 1828

The name Sydney comes from "Sydney Cove" which is where the English admiral Arthur Phillip established the first settlement, after arriving with the First Fleet. On 26 January 1788, he named it after Thomas Townshend, 1st Viscount Sydney, who was the home secretary at the time, and the man responsible for the plan for the convict colony in Australia.

The "City of Sydney" was established on 20 July 1842[5] by the Corporation Act which encompasses present-day Woolloomooloo, Surry Hills, Chippendale and Pyrmont, an area of 11.65 km². There were six wards established by boundary posts. A boundary post still exists in front of Sydney Square.

The boundaries of the City of Sydney have changed fairly regularly since 1900. The Municipality of Camperdown was merged with the city in 1909. Added in 1949 were Alexandria, Darlington, Erskineville, Newtown, Redfern, Glebe, Waterloo, and Paddington. In 1968 the boundaries were changed and many of these suburbs moved to be part of a new municipality of South Sydney. South Sydney was brought back into the city in 1982, but became separate again under the City of Sydney Act of 1988 and then became smaller than its original size at 6.19 km². It grew again in February 2004 with the merger of the two council areas, and now has a population of approximately 170,000 people.

The City of Sydney is a major supporter of the Sydney Peace Prize.

Transport New South Wales has its headquarters in Chippendale, City of Sydney.[6]

GEO Group Australia has its headquarters in the Sydney CBD.[7] Google has offices in the Pyrmont suburb.[8]

In 1975 Qantas was headquartered in the Qantas House in the City of Sydney.[9] 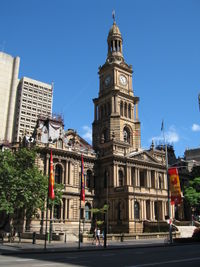 The Town Hall, seat of the City Council

As noted above, the electoral boundary of the City of Sydney have been significantly altered by state governments on at least four occasions since 1945, with advantageous effect to the governing party in the New South Wales Parliament at the time. Successive State governments of both major parties, the Labor Party and the Liberal Party, have re-drawn the electoral boundaries to include inner suburbs that are traditionally supportive of them, and to exclude suburbs that are traditionally hostile. In 1972 the Council had prepared the City of Sydney Strategic Plan, only the second city (after New York) to prepare a comprehensive assessment and plan of major issues for the future. With triennial reviews, this guided development of the City for twenty years,[10] and a similar planning process has continued.

A 1987 Liberal re-organisation saw Sydney Council split, with southern suburbs forming a new South Sydney council. This was thought to advantage the Liberal government of the day, as the southern suburbs had traditionally voted Labor.

In 2004, the Labor State Government undid this change, again merging the councils of the City of Sydney and the City of South Sydney. Critics claimed that this was performed with the intention of creating a "super-council" which would be under the control of the Australian Labor Party (ALP), which also controlled the State Government. Subsequent to this merger, an election took place on 27 March 2004 which resulted in the independent candidate Clover Moore defeating the high-profile ALP candidate, former federal minister Michael Lee and winning the position of Lord Mayor. Critics of the merger claimed that this was a result of a voter backlash against the party for attempting to create the "super-council".

Sydney City Council is composed of ten councillors, including the Lord Mayor, elected proportionally, for a fixed four year term of office.

The Lord Mayor is directly elected.[11] The current makeup of the council, including the Lord Mayor, is as follows:[11]

In addition, Sydney City Council has partnership agreements with these places:[citation needed]