The City of Wollongong is a Local Government Area in the Illawarra region of New South Wales, Australia. It is on the Pacific Ocean, the Southern Freeway and the South Coast railway line.

The area covers the northern and central suburbs of Wollongong, bounded by Helensburgh in the north, the Illawarra escarpment to the west, and by Macquarie Rivulet (Yallah, Haywards Bay) and the Lake Illawarra entrance (Windang) to the south.[2]

The council's offices are located in Burelli Street, Wollongong.

According to the Australian Bureau of Statistics, there:[3]

Local government in the Illawarra region started with the passage of the District Councils Act 1842, which allowed for limited local government in the form of a warden and between 3 and 12 councillors to be appointed by the Governor. Between July and September 1843, 28 such entities had been proclaimed by Governor George Gipps—the Illawarra District Council, the 17th to be declared, was proclaimed on 24 August 1843, with a population of 4,044 and an area of 1,708 square kilometres (659 sq mi)[5] covering the coastal plain from Bulli to Nowra and including inland districts such as Kangaroo Valley.[6] Due to various factors, the District Councils were ineffective, and most had ceased to operate by the end of the decade.[7]

The Municipalities Act of 1858,[8] which gave the councils more authority and which allowed for residents to petition for incorporation of areas and also to elect councillors, met with somewhat greater success. On 22 February 1859, the Municipality of Wollongong, with an area of 8 square kilometres (3 sq mi) and a population of 1,200, became the first to be proclaimed under the Act in New South Wales, with 114 residents in favour and none against. The first elections were held on 29 March 1859, with John Garrett becoming the first mayor of Wollongong.[9]

Other entities sprang into existence thereafter to service the surrounding region. The first, on 19 August 1859, was the Central Illawarra Municipality, which extended over 339.5 square kilometres (131.1 sq mi) from Unanderra (west of Wollongong) to Macquarie Rivulet, and had a population of 2,500. After an unsuccessful attempt by Wollongong to claim the area, the region from Fairy Meadow to Bellambi separately incorporated as North Illawarra on 26 October 1868. Finally, the Shire of Bulli was proclaimed further north on 15 May 1906.[6][9] 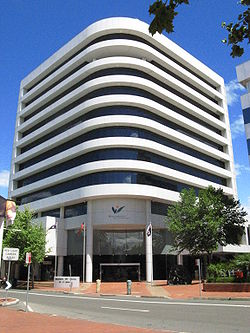 Wollongong was proclaimed as a city on 11 September 1942. There was considerable pressure for amalgamation of the Illawarra area, which had transformed from a disparate rural area with some coastal towns into an increasingly urban-industrial region, and on 12 September 1947, the City of Wollongong, the Shires of Bulli and Central Illawarra, and the Municipality of North Illawarra amalgamated to form the City of Greater Wollongong under the Local Government Act 1919.[6]

Its motto is "Urbs Inter Mare Montemque"—"City Between The Mountains And The Sea". Its corporate slogan is "City of Innovation".

In February 2008, Council was the centre of a major ICAC inquiry which revealed favourable treatment of local developers from certain Council staff. The inquiry heard evidence that a council planner had been sexually involved with three developers whilst assessing their developments. There was also evidence presented of an impersonation of ICAC officers and plans of intimidation.[10] This attracted significant media attention and renewed calls for tightening of rules of developer donations to political parties.[11][12][13] The Premier Morris Iemma also agreed that rules would be tightened as several of his Ministers have been implicated in this scandal.[14] On 4 March 2008, following recommendations from Commissioner Jerrold Cripps QC, the Local Government Minister approached the Governor of New South Wales to formally sack the council and install a panel of administrators (Gabrielle Kibble AO, Dr Colin Gellatly and Robert McGregor AM[15]) for four years[16] citing clear evidence of systemic corruption in Council.[17] In October 2008, the ICAC referred briefs of evidence in relation to all eleven persons found to have acted corruptly to the Director of Public Prosecutions (DPP).

A summary of ICAC's recommendations for charges and the individuals concerned, and the determinations made by the Courts are as follows:

The New South Wales Government installed administrators to run the Council until 2012. Dr Col Gellatly, Robert McGregor and Gabrielle Kibble were appointed to the administrator roles, but as of January 2010 Mrs Kibble resigned and was replaced by Richard Colley.[20][21]