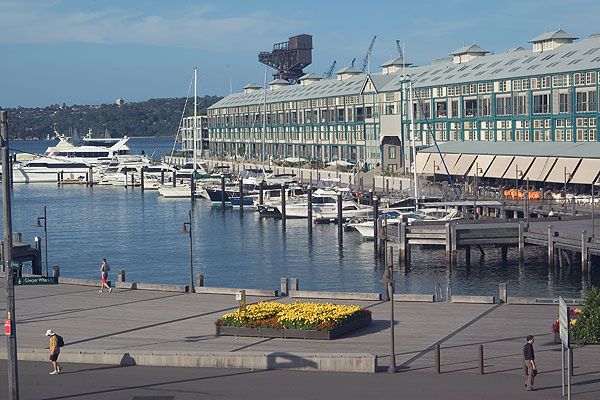 The suburb has historically been a poorer district of Sydney. This has changed only recently with recent of the inner city areas of Sydney. The redevelopment of the waterfront, particularly the construction of the housing development on the , has caused major change. Areas of public housing (housing commission) still exist in the suburb.

The current spelling of Woolloomooloo is derived from the name of the first homestead in area, Wolloomooloo House, built by the first landowner John Palmer. There is debate as to how Palmer came up with the name with different Aboriginal words being suggested. Anthropologist J.D. McCarthy wrote in 'NSW Aboriginal Places Names', in 1946, that Woolloomooloo could be derived from either "Wallamullah", meaning "place of plenty" or "Wallabahmullah", meaning a "young black kangaroo".

In 1852, the traveller Col. G.C. Mundy wrote that the name came from "Wala-mala", meaning an Aboriginal burial ground. It has also been suggested that the name means "field of blood", due to the alleged Aboriginal tribal fights that took place in the area, or that it is from the pronunciation by Aborigines of "windmill", from the one that existed on Darlinghurst ridge until the 1850s.

After the 's arrival in Sydney, the area was initially called Garden Cove or Garden Island Cove after the nearby small wooded Garden Island, off the shore. The first land grant was given to John Palmer in 1793 to allow him to run cattle for the fledgling colony.

In the 1840s the farm land was subdivided into what is now Woolloomooloo, Darlinghurst and parts of Surry Hills. Originally the area saw affluent residents building grand houses, many with spectacular gardens, attracted by the bay and close proximity to the city and Government House.

The area slowly started to change after expensive houses were built in Elizabeth Bay and further east and a road was needed from Sydney. It was for this reason that William Street was built, dividing the land for the first time.

Woolloomooloo is home to the building is, according to the , the largest wooden structure in the world. It is Convert|400|m|ft|-1 long and Convert|63|m|ft|-1|abbr=on|abbr=on wide and stands on 3,600 piles.

The Sydney Harbour Trust built the , or Woolloomooloo Wharf, between 1911 and 1915 with the charter to bring order to 's foreshore facilities. The wharf became the largest wooden structure in the world. The areas commerce was dominated by shipping at the wharf and by the regular influx of sailors from the Garden Island base of the .

The wharf's influence diminished for Woolloomooloo during the 1970s when other more modern wharves were preferred. By the 1980s the wharf lay derelict and empty and in 1987, the state government decided to demolish the Wharf.

Located near the wharf is , a popular fast-food stall and now tourist destination. The Andrew "Boy" Charlton Pool, sits on the western side of Woolloomooloo Bay, amongst the Royal Botanical Gardens.

* The song "My City Of Sydney", later covered by the post-punk band , mentions "That little church steeple in Woolloomooloo."
* The by is set in the fictitious university of Woolloomooloo, mainly due to its typical Australian name.
* The album by has a track titled "Wooloomooloo" [sic] .
* In 1970, Australian educator, journalist and politician created the paraphrase "A woman needs a man like a fish needs a bicycle," scribbling the phrase on two bathroom doors: one at Sydney University where she was then a student, and the other at Soren's Wine Bar in Woolloomooloo. The quip is often incorrectly attributed to American feminist . [Cite web |url=http://www.geocities.com/SiliconValley/Vista/3255/herstory.htm |work=A Bit of Herstory
title=The Definitive Word on the Origin |publisher=The Fish and Bicycle Page |last=Allen |first=John S |quote=I scribbled the phrase on the backs of two toilet doors, would you believe, one at Sydney University where I was a student, and the other at Soren's Wine Bar at Woolloomooloo, a seedy suburb in south Sydney.]