A disastrous attempt in the 1790s by the first settlers to farm the land around the current locality of Homebush, resulted in the land being abandoned. However, by the 1870s, the district started to develop as a residential area. The central location, halfway between Sydney and Parramatta, the establishment of rail services (from 1855 at Homebush) and availability of land, initially at low costs, attracted many wealthy merchants to build country style mansions within reasonable access to their City based businesses. Strathfield was also promoted as a healthy environment, away from owercrowded City conditions and diseases. Early land advertisements speak of the inland location as away from the 'injurious sea conditions'. With the relocation to Strathfield of many prominent families including the heirs of retailer David Jones, chemist Washington H Soul and many others, Strathfield became an elite and wealthy area. Its development differed markedly from the more working class areas of surrounding districts like Canterbury, Auburn and Concord.

The Municipality of Strathfield was proclaimed on 2 June 1885 by the Governor of NSW, Sir Augustus Loftus, after residents of the Redmire area petitioned the New South Wales State government to form local government. This move was opposed by residents of Homebush and Druitt Town, possibly fearing the dominance of the more affluent and politically connected residents of Redmire. Despite counter petitions, the Municipality was incorporated in 1885.

The Strathfield Municipality has expanded in geography and population over time and now includes the suburbs of Strathfield, Homebush and Homebush West (1947), Flemington (1892), Greenacre, Enfield (1949), Strathfield South, Chullora (part) and Belfield (part).

Traditionally, the municipality has fought amalgamation of their area with other councils, though additional land has been added to the Municipality since 1885 such as annexure of the unincorporated area of Flemington, merger with the west ward of the abolished Enfield Council in 1949 and merger with the Municipality of Homebush in May 1947. However, they strenuously objected to a push to amalgamate the councils into one mega-council, known as The Greater Sydney Movement, that happened from the early part of the 1890s till the later half of the 1930s. In 1983 it was recommended by the State Boundaries Commission that Strathfield be amalgamated into Burwood, however a great deal of uproar greeted this plan and after the then mayor, Clarrie Edwards, spoke in well attended public meetings the state government abandoned the plan due to a great deal of opposition from residents of the area. In 1999 another proposal was made to merge the Municipality of Burwood with the Municipality of Strathfield. However, the residents of Strathfield did not support this proposal and the merger never proceeded. A proposal was lodged by Auburn Council for a boundary change, which had the effect of a takeover of Strathfield Council. This was heavily objected to by residents of Strathfield and did not proceed.

On 20 December 2004, the mayor, Alfred Tsang of the Unity Party was forced to step down over allegations of corruption. Pictures had been published in The Australian of him accepting a $200,000 of $100 bills from a developer, Michael Saklaoui. This resulted in an inquiry by the ICAC, which implicated his successor as mayor, John Abi-Saab. Both resigned from the council in June 2005.

Throughout its history, there have been movements to amalgamate local councils in the Sydney area: the first major 'threat' was with the 'royal commission for a greater Sydney (1913)', known as 'The Greater Sydney Movement'. The Royal Commission brought together British Politician Sidney Webb[citation needed] and Australian Politician John Fitzgerald [2], amongst others, who believed that Sydney should be merged into a single local government area. This was extremely unpopular with both residents and many councils, including Strathfield council, and though bills were raised in State parliament in 1912, 1927 and 1931 they failed to gather any real support and the attempt to force amalgamation failed.[citation needed] In 1947 Homebush and Strathfield councils merged and part of Enfield was added in 1949.

In 1974 two reports, one by J.C. Barnett and the other from the State Boundaries Commission, recommended that Ashfield, Drummoyne, Burwood and Concord should amalgamate with Strathfield. This was energetically opposed by residents and council alderman and this amalgamation also did not come to fruition.

In 1992, a section of the northern part of the Municipality was transferred to the Auburn Council area. In return, the area of and between Boundary Creek and the railway line, occupied by the former Ford factory building, was transferred from Auburn to Strathfield Council.

Strathfield Municipal Council is composed of seven councillors elected proportionally. The mayor is not directly elected.[3] The current makeup of the council is as follows:[3]

The population of Strathfield is made up of a number of ethnic groups, and about 48% of the population born overseas. As a result there are a number of services for newly arrived immigrants and overseas students who live in the area. Two such organisations are the Russian Ethnic Community Council of NSW Inc (RECNSW), and the Sydney Tamil Resource Centre Inc (STRC). RECNSW provides access to information and referral to mainstream services to recent immigrants of Russian and Russian speaking background and disseminates information to remote and offshore areas on a number of issues.[clarification needed][4] STRC provides resources to Tamil immigrants.

In the 90s, a large number of Korean migrants settled in Strathfield. This was mainly due to its proximity to Campsie – which had been a de facto centre of Korean people. The boom in Korean International Students and establishment of the Strathfield Korean Uniting Church on Homebush Road were other factors. Strathfield now boasts a large number of shops selling Korean food and cultural items.

Strathfield also has a number of community centres, including a Rotary club, Latvian theatre, Lantern Club, and libraries. The local Rotary club provides support to the community and has a number of projects in the area[5], as well as a Musical Society (part of Rotary?), which normally produces two shows a year in the Latvian Theatre in Strathfield. Their main social activity is rehearsing twice weekly and they present seven performances of their musical production over two weekends. Strathfield Lantern Club Voluntary is located in Strathfield and provides fundraising organisation for raising funds specifically for the Royal Institute for Deaf and Blind Children in North Rocks.

Whilst not perhaps basking in quite the same popular musical glory as neighbouring Burwood with its links to the formation of the Easybeats and AC/DC, Strathfield has made its own unique contribution to pop. Strathfield was home during part of the 1960s to The BeeGees (Redmyre Road) and several Australian indie rock and indie pop bands have emerged from Strathfield including Prince Vlad & the Gargoyle Impalers, Lunatic Fringe, The Upbeat, Women of Troy member Paul O'Reilly, and The Mexican Spitfires. Grant McLennan of The Go-Betweens also lived in Carrington Avenue, Strathfield for a number of years in the 1990s.[citation needed]

The lyrics of the song by Radio Birdman, "Murder City Nights" refers to Woodward road in Strathfield [6]:

Cruising down Woodward gotta find me some action
Looking for a lover with a power reaction.

Strathfield has also been home to a number of famous sporting identities including cricketers Bobby Simpson and Alan Davidson and three Prime Ministers, Frank Forde, Billy Hughes and George Reid. 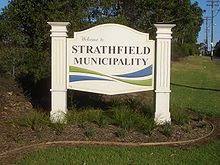 The Municipality of Strathfield is located at 33°52'10" North, 151°5'59" West (33.8717, 151.0899). It covers a total area of approximately 14.1 square kilometres and includes the suburbs of Strathfield, Strathfield South, Homebush, Homebush West, Greenacre, Flemington, part of Enfield and part of Belfield[9] (in Australia, a Local Government Area, or LGA, incorporates many suburbs into its area). Homebush Bay Drive bounds the Municipality of Strathfield to the north, Powells Creek, The Boulevarde and Coronation Parade bounds it to the east, Punchbowl Road and Juno Parade form the southern border and Roberts Road, Chullora rail yards, Rookwood Cemetery and the Sydney Olympic Park Rail line bound the Municipality to the west.

See also: Demographics of the Municipality of Strathfield.

On 17 August 1991, seven people were killed, when Wade Frankum stabbed a fifteen year-old girl to death, before running amok with a rifle in the Strathfield Plaza shopping mall, and then turning the weapon on himself. This is commonly known as the Strathfield Massacre and it shocked the nation. A Memorial plaque is located at Churchill Avenue, Strathfield.

In 2004 the then Mayor of the Municipality of Strathfield, Alfred Tsang, stepped down after he was caught on film accepting money from a property developer. This resulted in an inquiry by the ICAC, which found against Tsang, former Councillor John Abi-Saab and other associates.