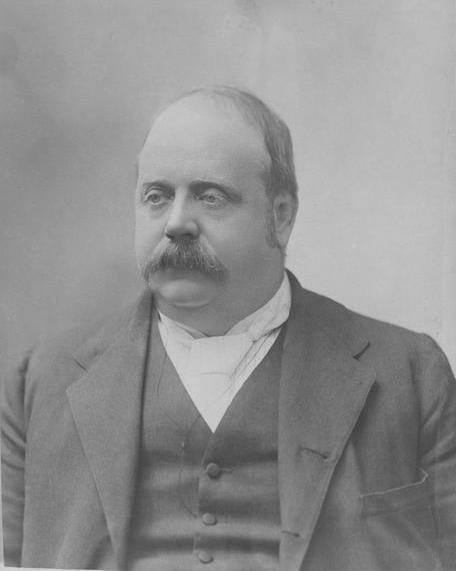 Reid was the last leader of the Liberal tendency in , led by and and which Reid organised as the Free Trade and Liberal Association in 1889.

When the family moved to when he was 13 years old, Reid obtained a job as a clerk. At the age of 15 he joined the School of Arts Debating Society, and according to his autobiography, a more crude novice than he was never began the practise of public speaking.

Reid's career was aided by his quick wit and entertaining oratory; he was described as being "perhaps the best platform speaker in the Empire"

Reid was elected top of the poll to the as a member for the four-member in 1880.

The new premier, , offered Reid the position of Colonial Treasurer in January 1883, but he thought it wiser to accept the junior office of Minister for Public Instruction. He was 14 months in office and succeeded in passing a much improved Education Act, which included the establishment of the first government high schools in the leading towns, technical schools (which became a model for the other colonies)

In February 1884, Reid lost his seat in parliament owing to a technicality; the necessary notice had not appeared in the Government Gazette declaring that the Minister for Public Instruction was a position that a parliamentarian could hold instead of being excluded from parliament for holding an "office of profit" . At the by-election Reid was defeated by a small majority as a result of the government's financial harships due to the loss of revenue as a result of the suspension of land sales. In 1885 he was re-elected to East Sydney and took a great part in the free trade or protection issue. He supported Sir Henry Parkes on the free trade side but, when Parkes came into power in 1887, declined a seat in his ministry. Parkes offered him a portfolio two years later and Reid again refused. He did not like Parkes personally and felt he would be unable to work with him. When payment of members of parliament was passed Reid, who had always opposed it, paid the amount of his salary into the treasury.

In September 1891, the Parkes ministry was defeated, the Dibbs government succeeded it, and Parkes retired from the leadership of the . Reid was elected leader of the opposition in his place. In 1891, he married Flora Ann Brumby. He managed to form his party into a coherent group although it "ran the whole gamut from conservative Sydney merchants through middle-class intellectuals to reformers who wished to replace indirect by direct taxation for social reasons."

At the 1894 election he made the establishment of a real free trade tariff with a system of direct taxation the main item of his policy, and had a great victory. and other well-known protectionists lost their seats, the Labour following was reduced from 30 to 18, and Reid formed his first cabinet. One of his earliest measures was a new lands bill which provided for the division of pastoral leases into two halves, one of which was to be open to the free selector, while the pastoral lessee got some security of tenure for the other half. Classification of crown lands according to their value was provided for, and the free selector, or his transferee, had to reside on the property.

Parkes at an early stage of the session raised the question of federation again, and Reid invited the premiers of the other colonies to meet in conference on 29 January 1895. As a consequence of this conference an improved bill was drafted which ensured that both the people and the parliaments of the various colonies should be consulted. Meanwhile Reid had great trouble in passing his land and income tax bills. When he did get them through the Assembly the Council threw them out. Reid obtained a dissolution, was victorious at the polls, and heavily defeated Parkes for the new single-member . He eventually succeeded in passing his acts, which were moderate, but strenuously opposed by the Council, and it was only the fear that the chamber might be swamped with new appointments that eventually wore down the opposition. Reid was also successful in bringing in reforms in the keeping of public accounts and in the civil service generally. Other acts dealt with the control of inland waters, and much needed legislation relating to public health, factories, and mining, was also passed.

he did not take a leading role. He was dissatisfied by the draft constitution, especially the power of a Senate, elected on the basis of States rather than population, to reject money bills. In the referendum campaign after the close of the Australasian Federal Convention, Reid, on 28 March 1898, made his famous "Yes-No" speech at the Sydney town hall. He told his audience that he intended to deal with the bill "with the deliberate impartiality of a judge addressing a jury". After speaking for an hour and three-quarters the audience was still uncertain about his verdict. He ended up by saying that while he felt he could not become a deserter to the cause he would not recommend any course to the electors. He consistently kept this attitude until the poll was taken on 3 June 1898. This earned him the nick-name "Yes-No Reid." The referendum in New South Wales resulted in a small majority in favour, but the yes votes fell about 8000 below the required number of 80,000.

At the general election held soon after, Barton accepted Reid's challenge to contest the East Sydney seat and Reid defeated him, but his party came back with a reduced majority. Reid fought for federation at the second referendum and it was carried in New South Wales by a majority of nearly 25,000, 107,420 Votes being cast in favour of it. "A bizarre combination of the Labor Party, protectionists, Federation enthusiasts and die-hard anti-Federation free traders" censured Reid for paying the expenses of J. C. Neild who had been commissioned to report on old-age pensions, prior to parliamentary approval. Governor Beauchamp refused Reid a dissolution and he resigned.

Reid was elected to the first federal Parliament as the Member for East Sydney in 1901. The Free Trade Party had 26 out of 75 seats in the House of Representatives, and 17 out of 36 seats in the Senate. Labour no longer trusted Reid and gave their support to the government, so Reid became the first , a position well-suited to his robust debating style and rollicking sense of humour. In the long tariff debate Reid was at a disadvantage as parliament was sitting in and he could not entirely neglect his practice as a barrister in Sydney, as his parliamentary income was less than a tenth of his income from his legal practice. With the rise of the Labour Party, the Free Trade Party had lost much of the middle ground to Barton and his followers, and it was increasingly dependent on conservatives, including militant Protestants.

On 18 August 1903, Reid resigned (the first member of the House of Representatives to do so). He contested the by-election for East Sydney on 4 September, and won it back [ [http://www.aph.gov.au/library/handbook/historical/representatives/prosser.storrer.htm Australian Parliamentary Handbook] ] . He is the only person in Australian federal parliamentary history to win back his seat at a by-election triggered by his own resignation.

Reid improved his party's position in the December 1903 election, and in August 1904, when the Watson government resigned, he became Prime Minister. He was the first former state premier to become Prime Minister (the only other to date being ). Reid did not have a majority in either House, and he knew it would be only a matter of time before Deakin's Protectionists patched up their differences with Labour, so he enjoyed himself in office while he could. In July 1905 the other two parties duly voted him out, and he left office with a good grace. He gained seats once more in 1906, but failed to win a majority.

In 1907-08, Reid strenuously resisted Deakin's commitment to increase tariff rates. In 1908, when Deakin proposed a "Fusion" of the two non-Labour parties, Reid stood aside from the leadership. On 24 December 1909 he resigned from Parliament (he was the first Member to have resigned twice) and in 1910 was appointed as Australia's first High Commissioner in .

Reid was extremely popular in Britain, and in 1916, when his term as High Commissioner ended, he was returned unopposed to the House of Commons for the seat of St George, Hanover Square as a Unionist candidate, where he acted as a spokesman for the self-governing s in supporting the war effort. He died suddenly in London in September 1918, aged 73 of , survived by his wife and their two sons and daughter.

Reid's posthumous reputation suffered from the general acceptance of protectionist policies by other parties, as well as from his buffoonish public image. In 1989 W. G. McMinn published "George Reid" (Melbourne University Press), a serious biography designed to rescue Reid from his reputation as a clownish reactionary and attempt to show his Free Trade policies as having been vindicated by history.