Repetition is important in music, where sounds or sequences are often repeated. One often stated idea is that repetition should be in balance with the initial statements and variations in a piece.[citation needed] It may be called restatement, such as the restatement of a theme. While it plays a role in all music, with noise and musical tones lying along a spectrum from irregular to periodic sounds,(Moravcsik, 114)(Rajagopal,[page needed]) it is especially prominent in specific styles. A literal repetition of a musical passage is often indicated by the use of a repeat sign, or the instructions da capo or dal segno.

Repetition is a part and parcel of symmetry—and of establishing motifs and hooks. You find a melodic or rhythmic figure that you like, and you repeat it through-out the course of the melody or song. This sort of repetition...helps to unify your melody; it's the melodic equivalent of a steady drumbeat, and serves as an identifying factor for listeners. However, too much of a good thing can get annoying. If you repeat your figure too often, it will start to bore the listener.
—(Miller, 106)

Memory affects the music-listening experience so profoundly that it would be not be hyperbole to say that without memory there would be no music. As scores of theorists and philosophers have noted...music is based on repetition. Music works because we remember the tones we have just heard and are relating them to the ones that are just now being played. Those groups of tones--phrases--might come up later in the piece in a variation or transposition that tickles our memory system at the same time as it activates our emotional centers...Repetition, when done skillfully by a master composer, is emotionally satisfying to our brains, and makes the listening experiences as pleasurable as it is.
—(Levitin,[page needed])

Theodor Adorno criticized repetition and popular music as being psychotic and infantile. In contrast, Richard Middleton (1990) argues that "while repetition is a feature of all music, of any sort, a high level of repetition may be a specific mark of 'the popular'" and that this allows an, "enabling" of "an inclusive rather than exclusive audience"(p.139). "There is no universal norm or convention" for the amount or type of repetition, "all music contains repetition - but in differing amounts and of an enormous variety of types." This is influenced by "the political economy of production; the 'psychic economy' of individuals; the musico-technological media of production and reproduction (oral, written, electric); and the weight of the syntactic conventions of music-historical traditions" (ibid, p.268).

During the Classical era, musical concerts were highly expected events, and because someone who liked a piece of music could not listen to it again, musicians had to think of a way to make the music sink in. Therefore, they would repeat parts of their song at times, making music like sonata very repetitive, without being dull.(Bowen)

Repetition is important in musical form. The repetition of any section of ternary form results in expanded ternary form and in binary form the repetition of the first section at the end of the second results in rounded binary form.(Benward & Saker, 315) Schenker argued that musical technique's, "most striking and distinctive characteristic" is repetition (Kivy, 327) while Boulez argues that a high level of interest in repetition and variation (analogy and difference, recognition and the unknown) is characteristic of all musicians, especially contemporary, and the dialectic [conversation] between the two creates musical form.(Campbell, 154) 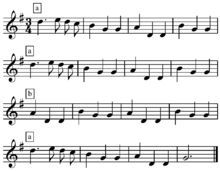 Play (help·info) as examples of aba, and "The Seeds of Love" as an example of the last.(Copland & Slatkin,[page needed])

At the tone level, repetition creates a drone.