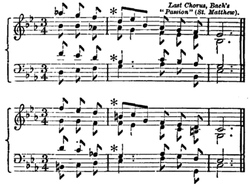 Pitch is an auditory perceptual property that allows the ordering of sounds on a frequency-related scale.[1] Pitches are compared as "higher" and "lower" in the sense associated with musical melodies,[2] which require "sound whose frequency is clear and stable enough to be heard as not noise".[3] Pitch is a major auditory attribute of musical tones, along with duration, loudness, and timbre.[4]

Pitch may be quantified as a frequency, but pitch is not a purely objective physical property; it is a subjective psychoacoustical attribute of sound. Historically, the study of pitch and pitch perception has been a central problem in psychoacoustics, and has been instrumental in forming and testing theories of sound representation, processing, and perception in the auditory system.[5]

Pitch is an auditory sensation in which a listener assigns musical tones to relative positions on a musical scale based primarily on the frequency of vibration.[6] Pitch is closely related to frequency, but the two are not equivalent. Frequency is an objective, scientific concept, whereas pitch is subjective. Sound waves themselves do not have pitch, and their oscillations can be measured to obtain a frequency. It takes a human brain to map the internal quality of pitch.

Pitches are usually quantified as frequencies in cycles per second, or hertz, by comparing sounds with pure tones, which have periodic, sinusoidal waveforms. Complex and aperiodic sound waves can often be assigned a pitch by this method.[7][8][9] In most cases, the pitch of complex sounds such as speech and musical notes corresponds very nearly to the repetition rate of periodic or nearly-periodic sounds, or to the reciprocal of the time interval between repeating similar events in the sound waveform.[8][9]

The pitch of complex tones can be ambiguous, meaning that two or more different pitches can be perceived, depending upon the observer.[5] When the actual fundamental frequency can be precisely determined through physical measurement, it may differ from the perceived pitch because of overtones, also known as upper partials, harmonic or otherwise. The human auditory perception system may also have trouble distinguishing frequency differences between notes under certain circumstances.

A complex tone composed of two sine waves of 1000 and 1200 Hz may sometimes be heard as up to four pitches: two spectral pitches at 1000 and 1200 Hz, derived from the physical frequencies of the pure tones, and two combination tones at 200 Hz and 2200 Hz, derived from the repetition rate of the waveform. They also have a spectrum that is (approximately) a stack of harmonics and the perceived pitch is related to the harmonic spacing. The lowest harmonic in the stack is called the fundamental frequency, and its frequency is strongly correlated with the pitch, though a strong pitch may be perceived even when the fundamental is missing.

Some theories of pitch perception hold that pitch has inherent octave ambiguities, and therefore is best decomposed into a pitch chroma, a periodic value around the octave, like the note names in western music, and a pitch height, which may be ambiguous, indicating which octave the pitch may be in.[5]

Pitch depends to lesser degree on the sound pressure level (loudness, volume) of the tone, especially at frequencies below 1,000 Hz and above 2,000 Hz. The pitch of lower tones gets lower as sound pressure increases. For instance, a tone of 200 Hz that is very loud will seem to be one semitone lower in pitch than if it is just barely audible. Above 2,000 Hz, the pitch gets higher as the sound gets louder.[10]

The just-noticeable difference (jnd, the threshold at which a change is perceived) depends on the tone's frequency content. Below 500 Hz, the jnd is about 3 Hz for sine waves, and 1 Hz for complex tones; above 1000 Hz, the jnd for sine waves is about 0.6% (about 10 cents).[11] The jnd is typically tested by playing two tones in quick succession with the listener asked if there was a difference in their pitches.[10] The jnd becomes smaller if the two tones are played simultaneously as the listener is then able to discern beat frequencies. The total number of perceptible pitch steps in the range of human hearing is about 1,400; the total number of notes in the equal-tempered scale, from 16 to 16,000 Hz, is 120.[10]

According to the American National Standards Institute, pitch is the auditory attribute of sound according to which sounds can be ordered on a scale from low to high. Since pitch is such a close proxy for frequency, it is almost entirely determined by how quickly the sound wave is making the air vibrate and has almost nothing to do with the intensity, or amplitude, of the wave. That is, "high" pitch means very rapid oscillation, and "low" pitch corresponds to slower oscillation. Despite that, the idiom relating vertical height to sound pitch is shared by most languages.[12] At least in English, it is just one of many deep conceptual metaphors that involve up/down. The exact etymological history of the musical sense of high and low pitch is still unclear. There is evidence that humans do actually perceive the source that a sound is coming from to be located slightly higher or lower in vertical space when the sound frequency is increased or decreased.[12]

The relative perception of pitch can be fooled, resulting in "aural illusions". There are several of these, such as the tritone paradox, but most notably the Shepard scale, where a continuous or discrete sequence of specially formed tones can be made to sound as if the sequence continues ascending or descending forever.

Not all musical instruments make notes with a clear pitch; percussion instruments are often distinguished by whether they do or do not have a particular pitch. A sound or note of definite pitch is one of which it is possible or relatively easy to discern the pitch. Sounds with definite pitch have harmonic frequency spectra or close to harmonic spectra.[10]

A sound generated on any instrument produces many modes of vibration occurring simultaneously. A listener hears numerous frequencies at once. The vibration that has the slowest rate is called the fundamental frequency, the other frequencies are overtones.[13] An important class of overtones is formed by the harmonics, which have frequencies in integer multiples of the fundamental.

It is still possible for two sounds of indefinite pitch to clearly be higher or lower than one another, for instance, a snare drum invariably sounds higher in pitch than a bass drum, though both have indefinite pitch, because its sound contains higher frequencies. In other words, it is possible and often easy to roughly discern the relative pitches of two sounds of indefinite pitch, but any given sound of indefinite pitch does not neatly correspond to a given definite pitch. A special type of pitch often occurs in free nature when the sound of a sound source reaches the ear of an observer directly and also after being reflected against a sound-reflecting surface. This phenomenon is called repetition pitch, because the addition of a true repetition of the original sound to itself is the basic prerequisite.

Concert pitch is the pitch reference to which a group of musical instruments are tuned for a performance. Concert pitch may vary from ensemble to ensemble, and has varied widely over musical history.

The A above middle C is usually set at 440 Hz (often written as "A = 440 Hz" or sometimes "A440"), although other frequencies are also often used, such as 442 Hz. Historically, this A has been tuned to a variety of higher and lower pitches. For example, Michael Praetorius proposed a standard of 465 Hz in the early 17th century.[14][not in citation given]

The transposing instruments in an orchestra will conventionally have their parts transposed into different keys from the other instruments (and even from each other). As a result, musicians need a way to refer to a particular pitch in an unambiguous manner when talking to different sections of the orchestra.

For example, the most common type of clarinet or trumpet, when playing a note written in their part as C, will sound a pitch that would be called B♭ on a non-transposing instrument like a piano. If you wanted to refer to that pitch unambiguously, you would call it "concert B♭", meaning "the pitch that someone playing a non-transposing instrument like a piano would call B♭". 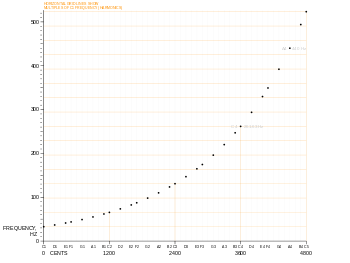 Pitches can be labeled using letters, as in Helmholtz pitch notation; using a combination of letters and numbers, as in scientific pitch notation, where notes are labelled upwards from C0, the 16 Hz C; or by a number representing the frequency in hertz (Hz), the number of cycles per second. For example, one might refer to the A above middle C as "a'", "A4", or "440 Hz". In standard Western equal temperament, the notion of pitch is insensitive to "spelling": the description "G4 double sharp" refers to the same pitch as "A4"; in other temperaments, these may be distinct pitches.

This creates a linear pitch space in which octaves have size 12, semitones (the distance between adjacent keys on the piano keyboard) have size 1, and A440 is assigned the number 69. (See Frequencies of notes.) Distance in this space corresponds to musical intervals as understood by musicians. An equal-tempered semitone is subdivided into 100 cents. The system is flexible enough to include "microtones" not found on standard piano keyboards. For example, the pitch halfway between C (60) and C♯ (61) can be labeled 60.5.

The relative pitches of individual notes in a scale may be determined by one of a number of tuning systems. In the west, the twelve-note chromatic scale is the most common method of organization, with equal temperament now the most widely used method of tuning that scale. In it, the pitch ratio between any two successive notes of the scale is exactly the twelfth root of two (or about 1.05946). In well-tempered systems (as used in the time of Johann Sebastian Bach, for example), different methods of musical tuning were used. Almost all of these systems have one interval in common, the octave, where the pitch of one note is double the frequency of another. For example, if the A above middle C is 440 Hz, the A an octave above that will be 880 Hz (info).

Other musical meanings of pitch

In atonal, twelve tone, or musical set theory a "pitch" is a specific frequency while a pitch class is all the octaves of a frequency. In many analytic discussions of atonal and post-tonal music, pitches are named with integers because of octave and enharmonic equivalency (for example, in a serial system, C♯ and D♭ are considered the same pitch, while C4 and C5 are functionally the same, one octave apart).

Discrete pitches, rather than continuously variable pitches, are virtually universal, with exceptions including "tumbling strains"[15] and "indeterminate-pitch chants".[16] Gliding pitches are used in most cultures, but are related to the discrete pitches they reference or embellish.[17]