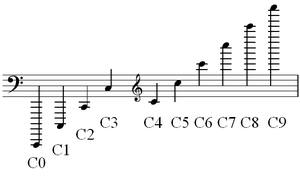 Scientific pitch notation is one of several methods that name the notes of the standard Western chromatic scale by combining a letter-name, accidentals, and a number identifying the pitch's octave. The definition of scientific pitch notation in this article is that proposed to the Acoustical Society of America in 1939,[1] where C0 is in the region of the lowest possible audible frequency at about 16 Hz.

Scientific pitch notation is an example of a note-octave notation (see below).

The transition in octave number occurs on the note C. Hence in ascending the white notes on a keyboard, "C4" follows "B3", and "A4" refers to the A above middle C (that is, A440, the note that has a frequency of 440 Hz).

Scientific pitch notation is often used to specify the range of an instrument. It provides an unambiguous means of identifying a note in terms of musical notation rather than frequency, while at the same time avoiding the transposition conventions that are used in writing the music for instruments such as the clarinet and guitar. The conventional octave naming system, where for example C0 is written as ′′C, or CCC in Helmholtz pitch notation, or referred to as subcontra C, and C4 is written as c′ or one-lined C, applies to the written notes that may or may not be transposed. For example, a d′ played on a B♭ trumpet is actually a C4 in scientific pitch notation.

Although pitch notation is intended to describe audible sounds, it can also be used to specify the frequency of non-audible phenomena. For example, when the Chandra X-ray Observatory observed the waves of pressure fronts propagating away from a black hole, the one oscillation every 10 million years was described in the press as corresponding to the B♭ fifty-seven octaves below middle C (or B♭−53).

Notation that appears to be scientific pitch notation may actually be based on an alternative octave numbering. While they are still note-octave systems, if they are called "scientific pitch notation", this is certainly an error. For example, MIDI software and hardware often uses C5 or C3 to represent middle C (note 60).[2] This is because the MIDI standard does not specify a particular octave numbering.[citation needed]

This creates a linear pitch space in which octaves have size 12, semitones (the distance between adjacent keys on the piano keyboard) have size 1, and A440 is assigned the number 69. Distance in this space corresponds to musical distance as measured in psychological experiments and understood by musicians. (An equal-tempered semitone is subdivided into 100 cents.) The system is flexible enough to include "microtones" not found on standard piano keyboards. For example, the pitch halfway between C (60) and C♯ (61) can be labeled 60.5.

The notation is sometimes used in the context of meantone temperament, and does not always assume equal temperament nor the standard concert A of 440 Hz; this is particularly the case in connection with earlier music.

The standard proposed to the Acoustical Society Of America[1] explicitly states a logarithmic scale for frequency, which excludes meantone temperament, and the base frequency it uses gives A4 a frequency of almost exactly 440 Hz (it comes out as approximately 439.96 Hz, which is a difference of 0.01 cents). However, when dealing with earlier music that did not use equal temperament, it is understandably easier to simply refer to notes by their closest modern equivalent, as opposed to specifying the difference using cents every time.

There is some possible confusion regarding the assignment of an octave to C♭ or B♯. The convention is that the letter name is first combined with the Arabic numeral to determine a specific pitch, which is then altered by applying accidentals. For example, the symbol C♭4 means "the pitch one chromatic step below the pitch C4" and not "the pitch-class C♭ in octave 4", so C♭4 is the same pitch as B3, not B4. Similarly, at the other end of the fourth octave, B♯4 is the same pitch as C5, not C4.

Scientific pitch is an absolute pitch standard that sets middle C (or C4) to 256 Hz. It was introduced in the early 20th century. A4 on this scale is approximately 431 Hz, noticeably different from the current concert pitch standard of 440 Hz. It is no longer used by concert orchestras but is still sometimes favoured in scientific writings for the convenience of all the octaves of C being an exact round number in binary counting.[3][4] The number to the base ten, (256)10, is equal to (100000000)2 to the base two. More usefully, the octaves of C remain a whole number all the way down to 1 Hz (in either counting system).[5][6]