Sharp (music)
For the use of the sharp sign in mathematics, see Musical isomorphism.
"♯" redirects here. It is not to be confused with Number sign or well-field system. 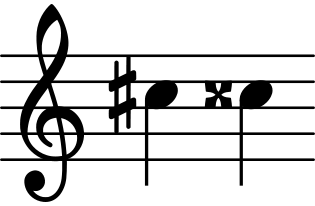 The notes C sharp and C double sharp on the treble clef. 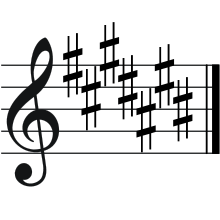 In music, sharp, dièse (from French), or diesis (from Greek)[1] means higher in pitch and the sharp symbol raises a note by a half tone.[2] Intonation may be flat, sharp, or both, successively or simultaneously. More specifically, in musical notation, sharp means "higher in pitch by a semitone (half step)," and has an associated symbol (♯), which may be found in key signatures or as an accidental, as may flats.

Under twelve-tone equal temperament, B sharp, for instance, sounds the same as, or is enharmonically equivalent to, C natural, and E sharp is enharmonically equivalent to F natural. In other tuning systems, such enharmonic equivalences in general do not exist. To allow extended just intonation, composer Ben Johnston uses a sharp to indicate a note is raised 70.6 cents (ratio 25:24), or a flat to indicate a note is lowered 70.6 cents.[3]

In tuning, sharp can also mean "slightly higher in pitch" (by some unspecified amount). If two simultaneous notes are slightly out of tune, the higher-pitched one (assuming the lower one is properly pitched) is said to be sharp with respect to the other. Furthermore, the verb sharpen means "raise the frequency of a note, typically by a small musical interval".

Quarter tone between C and C

Double sharps also exist; these are denoted by the symbol

and raise a note by two semitones, or one whole tone. Less often (in for instance microtonal music notation) one will encounter half, or three-quarter,

Play (help·info) or otherwise modified, sharps. A half sharp indicates the use of quarter tones, and may be marked with various symbols including

Although very uncommon and used only in modern classical music, a triple sharp (♯

) can sometimes be found. This raises a note by three semitones.

The sharp symbol (♯) may be confused with the number (hash or pound) sign (#). Both signs have two sets of parallel double-lines. However, a correctly drawn sharp sign must have two slanted parallel lines which rise from left to right, to avoid being obscured by the staff lines. The number sign, in contrast, has two compulsory horizontal strokes in this place. In addition, while the sharp also always has two perfectly vertical lines, the number sign (#) may or may not contain perfectly vertical lines (according to typeface and writing style).

The order of sharps in key signature notation is F♯, C♯, G♯, D♯, A♯, E♯, B♯ ("F"at "C"ats "G"o "D"own "A"lleys "E"ating "B"irds), each extra sharp being added successively in the following sequence of major keys: C→G→D→A→E→B→F♯→C♯. (These are sometimes learned using an acrostic phrase as a mnemonic, for example Father Charles Goes Down And Ends Battle.) Similarly the order of flats is based on the same natural notes in reverse order: B♭, E♭, A♭, D♭, G♭, C♭, F♭, encountered in the following series of major keys: C→F→B♭→E♭→A♭→D♭→G♭→C♭.

In the above progression, key C♯ (with seven sharps) may be more conveniently written as the harmonically equivalent key D♭ (with five flats), and likewise C♭ (with seven flats) written as B (with five sharps). Nonetheless, it is possible to extend the order of sharp keys yet further, through C♯→G♯→D♯→A♯→E♯→B♯→F

, and similarly for the flat keys, but with progressively decreasing convenience and usage.