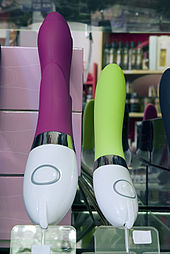 Two vibrators in a novelty store 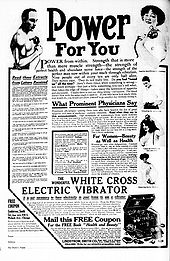 The home versions soon became extremely popular, with advertisements in periodicals such as Needlecraft, Woman's Home Companion, Modern Priscilla, and the Sears, Roebuck catalog. These disappeared in the 1920s, apparently because their appearance in pornography made it no longer tenable for polite society to avoid the sexual connotations of the devices.

Only 30% of women achieve orgasm through intercourse. In many women the position and stimulation of the clitoris, during sexual intercourse is not conducive to orgasm and there is no way that intercourse alone can produce an orgasm. [6] 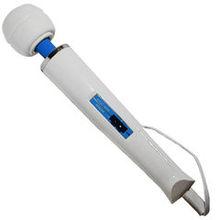 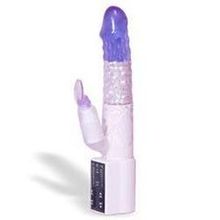 There is a wide range of vibrators but most of them fall into several broad categories:

The possession and sale of vibrators is illegal in some jurisdictions, including India, although they are sold online.[11]

Until recently, many American Southern and some Great Plains states banned the sale of vibrators completely, either directly or through laws regulating "obscene devices."[12] A federal appeals court upheld Alabama's law prohibiting the sale of sex toys on Valentine's Day, 2007.[13] The law, the Anti-Obscenity Enforcement Act of 1998, was also upheld by the Alabama Supreme Court on September 11, 2009.[14]

In February 2008, a US federal appeals court overturned a Texas statute banning the sales of vibrators and other sexual toys, deeming such a statute as violating the Constitution's 14th Amendment on the right to privacy.[15] The appeals court cited Lawrence v. Texas, where the U.S. Supreme Court in 2003 struck down bans on consensual sex between gay couples, as unconstitutionally aiming at "enforcing a public moral code by restricting private intimate conduct". Similar statutes have been struck down in Colorado, and Kansas. As of 2009, Alabama is the only state where a law prohibiting the sale of sex toys remains on the books, though Alabama residents are permitted to buy sex toys with a doctor's note.[14][16]

Some conservative Christians believe that the use of vibrators is immoral and prohibited by the Bible. An American Baptist preacher, Dan Ireland, has been an outspoken critic of such devices and has fought to ban them on religious and ethical grounds. According to Ireland, "Sometimes you have to protect the public against themselves....These devices should be outlawed because they are conducive to promiscuity, because they promote loose morals and because they entice improper and potentially deadly behaviors."[17] Ireland believes that "there is no moral way to use one of these devices."[17]

An American bioethicist and medical historian, Jacob M. Appel has argued that sex toys are actually a "social good" and that the devices, which he refers to as "marital substitutes," play "an important role in the emotional lives of millions of Americans."[14] Appel has written:

I cannot say whether more Alabama women own vibrators than own Bibles. If I were guessing, I would suspect that a majority derive more use out of the vibrators. Certainly more pleasure. Nor does there appear to be any remotely rational basis for keeping sex toys out of the hands of married adults, or single adults, or even children. Now that we are relatively confident that masturbation does not make little girls go blind, or cause palms to sprout hair, exposure to sex toys shouldn't harm them. On the list of items that I might not want children to be exposed to in stores—guns, matches, poisons, junk food—sex toys are way down the list.[14]