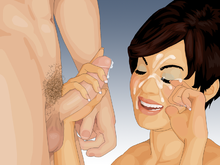 Illustration of a man ejaculating onto a woman's face.

The performance of a facial is typically preceded by activities that result in the sexual arousal and stimulation of the ejaculating participant. After the prerequisite level of sexual stimulation has been achieved, and ejaculation becomes imminent, the male will position his penis so that the semen discharged will be deposited onto his partner's face.

The volume of semen that is ejaculated depends on several factors, including the male's health, age, degree of sexual excitement, and the time since his last ejaculation.[2] Normal quantities of ejaculate range from 1.5 to 5.0 milliliters (1 teaspoon). Seconds after being deposited onto the face, the semen thickens, before liquefying 15–30 minutes later.[3]

Any sexual activity that involves contact with the bodily fluids of another person contains the risk of transmission of sexually transmitted diseases.[4] Semen is in itself generally harmless on the skin or if swallowed.[5][6] However, semen can be the vehicle for many sexually transmitted infections, such as HIV and Hepatitis. The California Occupational Safety and Health Administration categorizes semen as "other potentially infectious material" or OPIM.[7]

Aside from other sexual activity that may have occurred prior to performing a facial the risks incurred by the giving and receiving partner are drastically different. For the ejaculating partner there is almost no risk of contracting an STD. For the receiving partner, the risk is higher.[8] Since potentially infected semen could come into contact with broken skin or sensitive mucus membranes (eyes, lips, mouth), there is a risk of contracting an infectious disease.

In rare cases, people have been known to experience allergic reactions to seminal fluids, known as human seminal plasma hypersensitivity.[9] Symptoms can be either localized or systemic, and may include itching, redness, swelling, or blisters within 30 minutes of contact. They may also include hives and even difficulty breathing.

Treatment options for semen allergy include avoiding exposure to seminal fluid by use of condoms and attempting desensitization.[10]

Predating the modern age of pornography, facials were described in literature. As an example, the French aristocrat Marquis de Sade wrote about performing facials in his work The 120 Days of Sodom, written in 1785. One passage of the novel reads "... I show them my prick, then what do you suppose I do? I squirt the fuck in their face... That's my passion my child, I have no other... and you're about to behold it."[11]

In 2006 Clinique advertised a moisturising cream with a picture showing a white substance splashed across a model's face:[19][20] this was interpreted as an allusion to the facial in pornography.[21]

There are a variety of views ranging from facials being an act of degradation and elicit humiliation to being grounded in mutual respect and elicit pleasure.[22] Sex therapist Ruth Westheimer believes facials are humiliating and not sexy. She advises the average person contemplating oral sex to not think that a facial is a necessary part of the act.[1] In response to an inquiry from a reader, sex columnist Dan Savage wrote: "Facials are degrading—and that's why they're so hot."[23] Daily Nexus columnist Nina Love Anthony views the practice of facials in a non-threatening light, feeling that it adds variety to the sexual experience. In one of her weekly articles she wrote "But let's give credit where credit is due: The money shot, by itself, is great for a number of reasons. Blowing it on someone's face is like a change-up pitch - if you've been throwing the heat for a while, maybe you should consider hooking the curve ball." She continues with "Also, being on the receiving end of the shot can satisfy the secret porn star in everyone and it's minor kink for beginners".[24] 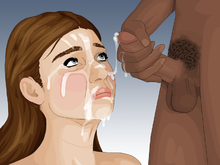 A woman receiving a facial

Feminist views of the depiction of male-on-female facials are primarily critical. Sociologists Gail Dines, Robert Jensen and Russo echo these sentiments in the book Pornography: The Production and Consumption of Inequality it asserts "In pornography, ejaculating onto a woman is a primary method by which she is turned into a slut, something (not really someone) whose primary, if not only, purpose is to be sexual with men."[25] Radical feminist and noted critic of pornography Andrea Dworkin said "it is a convention of pornography that the sperm is on her not in her. It marks the spot, what he owns and how he owns it. The ejaculation on her is a way of saying (through showing) that she is contaminated with his dirt; that she is dirty."[8]

Other critics suggest different meanings. Author Lisa Moore suggests that Dworkin's explanation does not take into account that it is the pleasure the actresses exhibit that the male partners enjoy, and that it is more accurate to think men want their semen to be wanted.[8] Women's activist Beatrice Faust stated "Since ejaculating into blank space is not much fun, ejaculating over a person who responds with enjoyment sustains a lighthearted mood as well as a degree of realism." She goes on to say "Logically, if sex is natural and wholesome and semen is as healthy as sweat, there is no reason to interpret ejaculation as a hostile gesture."[26][27] Joseph Slade, professor at Ohio University,[28] notes in his book Pornography and sexual representation: a reference guide that adult industry actresses in the 1960s and 1970s did not trust birth control methods, and that more than one actress of the period told him that ejaculation inside her body was deemed inconsiderate if not rude.[27]