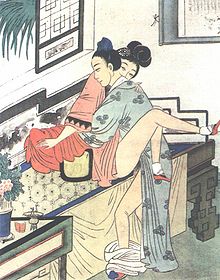 A Chinese print depicting "The Joining of the Essences", based on Tang Dynasty art.

Taoist sexual practices (Simplified Chinese: 房中术, Traditional Chinese: 房中術, pinyin: fángzhōngshù), literally "the bedroom arts", are the way some Taoists practiced sex. These practices were also known as "Joining Energy" or "The Joining of the Essences". Practitioners believed that by performing these sexual arts, one could stay in good health, and attain longevity, and eventually, with some other 'spiritual' or alchemical practices, attain even immortality.

Some Taoist sects during the Han Dynasty performed sexual intercourse as a 'spiritual' practice, called "HeQi" ("Joining Energy"). They especially like to try erotic things. The first sexual texts that survive today are those found at the Mawangdui tombs. While Taoism had not yet fully evolved as a philosophy at this time, these texts shared some remarkable similarities with later Tang dynasty texts, such as the Ishinpō. The sexual arts arguably reached their climax between the end of the Han dynasty and the end of the Tang dynasty. After 1000 A.D. [CE], Confucian puritanism became stronger and stronger, so that by the advent of the Qing dynasty, sex was a taboo topic in public life. These Confucians alleged that the separation of genders in most social activities existed two thousand years ago, and suppressed the sexual arts. Because of the taboo surrounding sex, there was much censoring done during the Qing in literature, and the sexual arts disappeared in public life. As a result, some of the texts survived only in Japan, and most scholars had no idea that such a different concept of sex existed in early China.[1]

The basis of all Taoist thinking is that qi is part of everything in existence. Qi is related to another energetic substance contained in the human body known as jing (精), and once all this has been expended the body dies. Jing can be lost in many ways, but most notably through the loss of body fluids. Taoists may use practices to stimulate/increase and conserve their bodily fluids to great extents. The fluid believed to contain the most Jing is semen. Therefore Taoists believe in decreasing the frequency of, or totally avoiding, ejaculation in order to conserve life essence.[2]

Many Taoist practitioners link the loss of ejaculatory fluids to the loss of vital life force: where excessive fluid loss results in premature aging, disease, and general fatigue. While some Taoists contend that one should never ejaculate, others provide a specific formula to determine the maximum amount of regular ejaculations in order to maintain health.[3] The general idea is to limit the loss of fluids as much as possible to the level of your desired practice. As these sexual practices were passed down over the centuries, some practitioners have given less importance to the limiting of ejaculation. Nevertheless, the "retention of the semen" is one of the foundational tenets of Taoist sexual practice.[4]

There are different methods to control ejaculation prescribed by the Taoists. In order to avoid ejaculation, the man could do one of two things. He could pull out immediately before orgasm, a method which Joseph Needham termed "coitus conservatus". [5] The second method involved the man applying pressure on perineum, thus retaining the sperm. While, if done incorrectly can cause a retrograde ejaculation, the Taoists believed that the jing traveled up into the head and "nourished the brain."[6] This method is referred to by some Taoist scholars as "The Million Dollar Point" (reference Mantak Chia), regarding it as either a cheap lesson for income or a backup method, believing that it somehow lessened the loss of "jing" from a full ejaculation. Some modern teachers have come to the conclusion that the method should not be used because of potential dangers.[7] Another method involves the Taoist to train himself to separate the impulses of ejaculation and orgasmic contraction (the contraction of the pelvic muscles that "pump" the prostate and the ejaculate). By separating these impulses, at the point of orgasm, the man can halt penetration but remain inside his partner, and forcibly clench his pelvic floor ("stunting" the initial prostate contractions), while simultaneously adopting a meditation like "intention" that these Taoists believe redirect not the physical sperm, but the life energy (jing) it contains up the back and to the center of the brain. This way the man will still have an orgasm, but will not ejaculate, and most importantly will not lose his erection. This formula prescribes the man to climb a "ladder" of escalating orgasms in conjunction with the meditation like "intention", in order to cultivate and store massive amounts of "jing". If performed successfully the male should have no stagnating pain in the testes, and should have no semen in his urine, as well as the health benefits expected by practitioners[citation needed]. Those that practice this method believe that it is one of the keys to immortality.

Another important concept of "The Joining of the Essences" was that the union of a man and a woman would result in the creation of jing, a type of sexual energy. When in the act of lovemaking, jing would form, and the man could transform some of this jing into qi, and replenish his lifeforce. By having as much sex as possible, men had the opportunity to transform more and more jing, and as a result would see many health benefits.[2]

The concept of Yin and yang is important in Taoism, and consequently also holds special importance in sex. Yang usually referred to the male gender, whereas Yin could refer to the female gender. Man and Woman were the equivalent of heaven and earth, but became disconnected. Therefore while heaven and earth are eternal, man and woman suffer a premature death.[8] Every interaction between Yin and Yang had significance. Because of this significance, every position and action in lovemaking had importance. Taoist texts described a large number of special sexual positions that served to cure or prevent illness.[9]

Significance of the woman

For Taoists, sex was not just about pleasing the man. The woman also had to be stimulated and pleased in order to benefit from the act of sex. Sex could only happen if both partners desired it. If sex were performed in this manner, the woman would create more jing, and the man could more easily absorb the jing to increase his own qi. Women were also given a prominent place in the Ishinpō, with the tutor being a woman. One of the reasons women had a great deal of strength in the act of sex was that they walked away undiminished from the act. The woman had the power to bring forth life, and did not have to worry about ejaculation or refractory period.

Yet, women were often still given a position of inferiority in sexual practice. Many of the texts discuss sex from a male point of view, and avoid discussing how sex could benefit women. Men were encouraged to not limit themselves to one woman, and were advised to have sex only with the woman who was beautiful and had not had children. While the man had to please the woman sexually, she was still just an object.[10] At numerous points during the Ishinpō, the woman is referred to as the "enemy"; this was because the woman could cause him to spill semen and lose vitality. In later sexual texts from the Ming, women had lost all semblance of being human and were referred to as the "other," "crucible", or "stove" from which to cultivate vitality. The importance of pleasing the woman was also diminished in later texts.[11] The practise was known as Caibao (採補), as a man enters many women without ejaculation.

Women were also considered to be a means for men to extend men's lives. Many of the ancient texts were dedicated explanation of how a man could use sex to extend his own life. But, his life was extended only through the absorption of the woman's vital energies (jing and qi). Some Taoists called the act of sex “The battle of stealing and strengthening.”[12] These sexual methods could be correlated with Taoist military methods. Instead of storming the gates, the battle was a series of feints and maneuvers that would sap the enemy's resistance.[13] Some taoists said to emperors by using their power to do that could extend their lives, but it actually weakened them.[14][15][16].

Another text, Health Benefits of the Bedchamber, indicates that certain times were better for intercourse than others. A person had to avoid having intercourse on quarter or full moons and on days when there were great winds, rain, fog, cold or heat, thunder, lightning, darkness over heaven and earth, solar and lunar eclipses, rainbows and earthquakes. Having intercourse at these times would harm a man's spirit and would cause women to become ill. Children conceived at these times would be mad, stupid, perverse or foolish; mute, deaf, crippled or blind; unfilial and violent.

Also important was selecting the right day for intercourse if a person desired children. After the woman's period, the first, third or fifth days were the best. If on these days the man ejaculated after midnight, the child would likely be male. If a female child was desired, the man needed to ejaculate on the second, fourth or sixth days after the cessation of the woman's period.

The location of sex was also important. People had to avoid the glare of the sun, moon or stars, the interior of shrines, proximity to temples, wells, stoves and privies, and the vicinity of graves or coffins.

Some Ming Dynasty Taoist sects believed that one way for men to achieve longevity or 'towards immortality' is by having intercourse with virgins, particularly young virgins. Taoist sexual books, such as the Hsuan wei Hshin ("Mental Images of the Mysteries and Subtleties of Sexual Techniques") and San Feng Tan Cheueh ("Zhang Sanfeng's Instructions in the Physiological Alchemy"), written, respectively, by Zhao Liangpi and Zhang Sanfeng (not to be confused with semi-mythical Zhang Sanfeng who lived in an earlier period), call the woman sexual partner ding (鼎) and recommend sex with premenarche virgins. Zhao Liangpi concludes that the ideal ding is a premenarche virgin just under 14 years of age and women older than 18 should be avoided.[18] Zhang Sanfeng went further and divided ding into three ranks: the lowest rank, 21- to 25-year-old women; the middle rank, 16- to 20-year-old menstruating virgins; the highest rank, 14-year-old premenarche virgins.[19]

According to Ge Hong, a 4th century Taoist alchemist, "those seeking 'immortality' must perfect the absolute essentials. These consist of treasuring the jing, circulating the qi and consuming the great medicine."[20] The sexual arts concerned the first precept, treasuring the jing. This is partially because treasuring the jing involved sending it up into the brain. In order to send the jing into the brain, the male had to refrain from ejaculation during sex. According to some Taoists, if this was done, the jing would travel up the spine and nourish the brain instead of leaving the body. Ge Hong also states, however, that it is folly to believe that performing the sexual arts only can achieve immortality and some of the ancient myths on sexual arts had been misinterpreted and exaggerated. Indeed, the sexual arts had to be practiced alongside alchemy to attain longevity. Ge Hong also warned it could be dangerous if practiced incorrectly. [20]