Cathine
Not to be confused with caffeine, a compound found in coffee and tea.

Cathine, also known as d-norpseudoephedrine, is a psychoactive drug of the phenethylamine and amphetamine chemical classes which acts as a stimulant. Along with cathinone, it is found naturally in Catha edulis (khat), and contributes to its overall effects.

Cathine is one of the optical isomers of phenylpropanolamine (PPA).

The World Anti-Doping Agency's list of prohibited substances (used for the Olympic Games among other athletic events) bars cathine in concentrations of over 5 micrograms per milliliter in urine. Cathine is a Schedule III drug under the Convention on Psychotropic Substances.[1] In the United States, it is classified as a Schedule IV controlled substance. 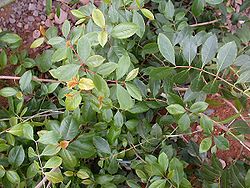