The regulation of therapeutic goods, that is drugs and therapeutic devices, varies by jurisdiction. In some countries, such as the United States, they are regulated at the national level by a single agency. In other jurisdictions they are regulated at the state level, or at both state and national levels by various bodies, as is the case in Australia. 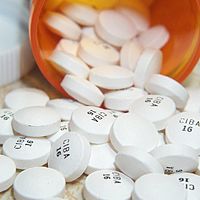 Therapeutic goods in Australia are regulated by the Therapeutic Goods Administration (TGA).[1] The availability of drugs and poisons is regulated by scheduling under individual state legislation, but is generally under the guidance of the national Standard for the Uniform Scheduling of Drugs and Poisons (SUSDP).

Under the SUSDP, medicinal agents generally belong to one of five categories:

Therapeutic goods in Brazil are regulated by the Brazilian Health Ministry, through its Sanitary Surveillance Agency (equivalent to USA's FDA). There are 5 main categories:

In Canada, regulation of therapeutic goods are governed by the Food and Drug Act and associated regulations. In addition, the Controlled Drugs and Substances Act requires additional regulatory requirements for controlled drugs and drug precursors.[3]

The regulation of drugs in China is governed by the State Food and Drug Administration.

Medicines in the United Kingdom are regulated by the Medicines and Healthcare products Regulatory Agency (MHRA). The availability of drugs is regulated by classification by the MHRA as part of marketing authorisation of a product.

The United Kingdom has a three-tiered classification system:

Medicines in Norway are divided into five groups:

Class A Narcotics, sedative-hypnotics, and amphetamines in this class require a special prescription form:

Class B Restricted substances which easily lead to addiction like:

Medicines in Iceland are regulated by the Icelandic Medicines Control Agency [1].

Medicines in Switzerland are regulated by SwissMedic.[4] The country is not part of the European Union, and is regarded by many as one of the easiest places to conduct clinical trials on new drug compounds.

There are 5 categories from A to E to cover different types of Delivery category:

A: Single delivery on medical prescription

B: Repeated delivery on medical prescription

C: Prescription free delivery after consultation of a specialist, restricted to pharmacy/chemist

D: Prescription free delivery after consultation of a specialist, restricted to pharmacy, chemist and drugstore

E: Prescription free delivery without consultation in all shops/stores

Medicines in India are regulated by CDSCO - Central Drugs Standard Control Organization Under Ministry of Health and Family Welfare. Headed by Directorate General of Health Services CDSCO regulates the Pharmaceutical Products through DCGI - Drugs Controller General of India at Chair.

Under Retail and Distribution:- Drugs classified under 5 heads

List of the equipment for the efficient running of manufacturing wing, Qualified personnel

Main article: Regulation of therapeutic goods in the United States

Therapeutic goods in the United States are regulated by the U.S. Food and Drug Administration (FDA), which makes some drugs available over the counter at retail outlets and others by prescription only.

The possession of some substances is prohibited by scheduling under the Controlled Substances Act, under the joint jurisdiction of the FDA and the Drug Enforcement Administration (DEA).