Urine (from Latin Urina, ae, f.) is a typically sterile (in the absence of a disease condition)[1] liquid by-product of the body that is secreted by the kidneys through a process called urination and excreted through the urethra. Cellular metabolism generates numerous by-products, many rich in nitrogen, that require elimination from the bloodstream. These by-products are eventually expelled from the body in a process known as micturition, the primary method for excreting water-soluble chemicals from the body. These chemicals can be detected and analyzed by urinalysis.

Most animals have excretory systems for elimination of soluble toxic wastes. In humans, soluble wastes are excreted primarily by the urinary system and, to a lesser extent in terms of urea removed, by perspiration.[2] The urinary system consists of the kidneys, ureters, urinary bladder, and urethra. The system produces urine by a process of filtration, reabsorption, and tubular secretion. The kidneys extract the soluble wastes from the bloodstream, as well as excess water, sugars, and a variety of other compounds. The resulting urine contains high concentrations of urea and other substances, including toxins. Urine flows from the kidney through the ureter, bladder, and finally the urethra before passing from the body.

Exhaustive detailed description of the composition of human urine can be found in NASA Contractor Report No. NASA CR-1802, D. F. Putnam, July 1971[3]. That report provided detailed chemical analyses for inorganic and organic constituents, methods of analysis, chemical and physical properties and its behavior during concentrative processes such as evaporation, distillation and other physiochemical operations. Urine is an aqueous solution of greater than 95% water, with the remaining constituents, in order of decreasing concentration urea 9.3 g/L, chloride 1.87 g/L, sodium 1.17 g/L, potassium 0.750 g/L, creatinine 0.670 g/L and other dissolved ions, inorganic and organic compounds.

Urine is sterile until it reaches the urethra where the epithelial cells lining the urethra are colonized by facultatively anaerobic Gram negative rods and cocci.[4] Subsequent to elimination from the body, urine can acquire strong odors due to bacterial action,[citation needed] and in particular the release of asphyxiating ammonia from the breakdown of urea. In medieval times clothes were stored in a garderobe (literally 'to guard ones robes') close to the toilet shaft because this ammonia would kill the fleas.[5] The term garderobe became a euphemism for toilet for that reason.

Some diseases alter the quantity and consistency of the urine, such as sugar as a consequence of diabetes. Beeturia, which affects some 10–14% of the population, results in the excretion of betanin after eating beets (such as beetroot) resulting urine with a pink/reddish color.[6] Beeturia can appear and disappear in individuals.[7]

Urine is not toxic.[8] However, being a waste product, it does contain compounds undesirable to the body and can be irritating to skin and eyes. After suitable processing (as is done, for example, on the International Space Station), it is possible to extract potable water from urine for drinking.

The typical color can range from clear to a dark amber, depending mostly upon the level of hydration of the body, among other factors.

Urine contains a range of substances that vary with what is introduced into the body. Aside from water, urine contains an assortment of inorganic salts and organic compounds, including proteins, hormones, and a wide range of metabolites. 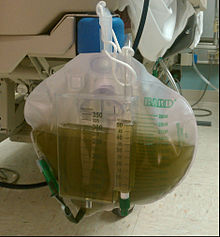 Green urine during long term infusion of the sedative propofol

Urine is a transparent solution that can range from colorless to amber but is usually a pale yellow. In the urine of a healthy individual, the color comes primarily from the presence of urobilin. Urobilin in turn is a final waste product resulting from the breakdown of heme from hemoglobin during the destruction of aging blood cells.

Colorless urine indicates over-hydration, which is usually considered much healthier than dehydration (to some extent however over-hydration can remove essential salts from the body). In the context of a drug test, it could indicate a potential attempt to avoid detection of illicit drugs in the bloodstream through over-hydration.[9]

The smell of urine can be affected by the consumption of food. Eating asparagus is known to cause a strong odor in human urine. This is because of the body's breakdown of asparagusic acid.[10] Other foods and beverages that contribute to odor include saffron, alcohol, coffee, turkey, and onion. Particularly spicy foods can have a similar effect, as the compounds are not broken down by the kidneys and pass through the body in the urine.[11][12]

Turbid (cloudy) urine may be a symptom of a bacterial infection, but can also be caused by crystallization of salts such as calcium phosphate.[citation needed]

The pH of urine is close to neutral (7) but can normally vary between 4.6 and 8. In persons with hyperuricosuria, acidic urine can contribute to the formation of stones of uric acid in the kidneys, ureters, or bladder.[13] Urine pH can be monitored by a physician[14] or at home.

The amount of urine produced depends on numerous factors including level of hydration, activities, environmental factors, weight of individual, and the individual's health. In adult humans the average production is about 1 – 2 L per day. Producing too much or too little urine needs medical attention: Polyuria is a condition of excessive production of urine (> 2.5 L/day), in contrast to oliguria where < 400 mL are produced per day, or anuria with a production of < 100 mL per day.

Normal urine density or specific gravity values vary between 1.003–1.035 (g·cm−3) , and any deviations may be associated with urinary disorders. 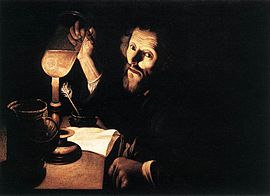 Urine contains large quantities of nitrogen (mostly as urea), as well as significant quantities of dissolved phosphates and potassium, the main macronutrients required by plants. Diluted at least 8:1 with water it can be applied directly to soil as a fertilizer. Undiluted, it can chemically burn the roots of some plants, but it can be safely used as a source of complementary nitrogen in carbon rich compost.[20] Urine typically contains 70% of the nitrogen and more than half the phosphorus and potassium found in urban waste water flows, while making up less than 1% of the overall volume. Thus far, source separation, or urine diversion and on-site treatment has been implemented in South Africa, China, and Sweden among other countries with the Bill and Melinda Gates Foundation provided some of the funding implemenations.[21] China – in 2003 reportedly had 685,000 operating source separation toilets spread out among 17 provinces [22]

"Urine management" is a relatively new way to view it and close the cycle of agricultural nutrient flows, to reduce sewage treatment costs, reduce ecological consequences such as eutrophication, and reduce the influx of nutrient rich effluent into aquatic or marine ecosystems. [23] The fertilization effect of urine has been found to be comparable to that of commercial fertilizers with an equivalent NPK rating. [24]

However, depending on the diet of the producer, urine may also have undesirably high concentrations of various inorganic salts such as sodium chloride, which are also excreted by the renal system. Concentrations of heavy metals such as lead, mercury, and cadmium, commonly found in solid human waste, are much lower in urine (though not low enough to qualify for use in organic agriculture under current EU rules).[25] Proponents of urine as a natural source of agricultural fertilizer claim the risks to be negligible or acceptable. Their views seem to be backed by research showing there are more environmental problems when it is treated and disposed of compared with when it is used as a resource.[26]

It is unclear whether source separation, urine diversion, and on-site treatment of urine can be made cost effective, and to what degree the required behavioral changes would be regarded as socially acceptable, as the largely successful trials performed in Sweden may not readily generalize to other industrialized societies.[24] In developing countries, the application of pure urine to crops is rare, but the use of whole raw sewage (termed night soil) has been common throughout history. However, there are more calls for urine's use as a fertilizer such as a Scientific American article "Human urine is an effective fertizler".[27]

In pre-industrial use as a cleaning fluid due to its ammonia content.[citation needed]

Urine has been used in the manufacture of gunpowder. Urine, a nitrogen source, was used to moisten straw or other organic material, which was kept moist and allowed to rot for several months to over a year. The resulting salts were washed from the heap with water, which was evaporated to allow collection of crude saltpeter crystals, that were usually refined before being used in making gunpowder.[28]

Numerous survival instructors and guides,[29][30][31][32][33] including the US Army Field Manual,[34] advise against drinking urine for survival. These guides explain that drinking urine tends to worsen, rather than relieve dehydration due to the salts in it, and that urine should not be consumed in a survival situation, even when there is no other fluid available. In hot weather survival situations, where water is also hard to find, soaking cloth in urine (a shirt for example) and putting it on one's head can help cool the body.

During World War I, the Germans experimented with numerous poisonous gases for use during war. After the first German chlorine gas attacks, Allied troops were supplied with masks of cotton pads that had been soaked in urine. It was believed that the ammonia in the pad neutralized the chlorine. These pads were held over the face until the soldiers could escape from the poisonous fumes, although it is now known that chlorine gas reacts with urine to produce toxic fumes (see chlorine and Use of poison gas in World War I).[citation needed]

Urban myth states that urine works well against jellyfish stings, and this scenario was demonstrated on a Season 4 episode of the NBC-TV show Friends, "The One With the Jellyfish", an early episode of the CBS-TV show Survivor and the documentary film The Real Cancun. At best, it is ineffective and in some cases this treatment may make the injury worse.[35][36][37]

Urine has often been used as a mordant to help prepare textiles, especially wool, for dyeing. This usage was mentioned in Gathering Blue by Lois Lowry. In Scotland, the process of "walking" (stretching) the tweed is preceded by soaking in urine.[38]

Ancient Romans used human urine to cleanse grease stains from their clothing, before acquiring soaps from the Germans during the first century AD.[39] Urine that has been fermented for the purposes of cleaning is referred to as lant. The emperor Nero instituted a tax (Latin: vectigal urinae) on the urine industry. This tax was continued by Nero's successor, Vespasian, to whom is attributed the Latin saying Pecunia non olet (money doesn't smell) – this is said to have been Vespasian's reply to a complaint from his son about the disgusting nature of the tax. Vespasian's name is still attached to public urinals in France (vespasiennes), Italy (vespasiani), and Romania (vespasiene).

Alchemists spent much time trying to extract gold from urine, and this effort led to discoveries such as white phosphorus, which was discovered by the German alchemist Hennig Brand in 1669 when he was distilling fermented urine. In 1773 the French chemist Hilaire Rouelle discovered the organic compound urea by boiling urine dry.

The word "urine" was first used in the 14th century. Before that, the concept was described by the now vulgar word "piss". Onomatopoetic in origins, "piss" was the primary means of describing urination, as "urinate" was at first used mostly in medical contexts. Likely, "piss" became vulgar through its use by lower class characters such as the reeve and the Wife of Bath in Geoffrey Chaucer's 14th century work The Canterbury Tales. "Piss" and its association with vulgarity has led to its current classification as obscene, as well as its use in such colloquial expressions as "to piss off" and "piss poor". Euphemisms such as "pee" are used, but there are many more for the act of urination.