A chemical formula or molecular formula is a way of expressing information about the atoms that constitute a particular chemical compound.

The chemical formula identifies each constituent element by its chemical symbol and indicates the number of atoms of each element found in each discrete molecule of that compound. If a molecule contains more than one atom of a particular element, this quantity is indicated using a subscript after the chemical symbol (although 18th-century books often used superscripts) and also can be combined by more chemical elements. For example, methane, a small molecule consisting of one carbon atom and four hydrogen atoms, has the chemical formula CH4. The sugar molecule glucose has six carbon atoms, twelve hydrogen atoms and six oxygen atoms, so its chemical formula is C6H12O6.

Chemical formulas may be used in chemical equations to describe chemical reactions. For ionic compounds and other non-molecular substances an empirical formula may be used, in which the subscripts indicate the ratio of the elements. 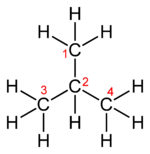 The connectivity of a molecule often has a strong influence on its physical and chemical properties and behavior. Two molecules composed of the same numbers of the same types of atoms (i.e. a pair of isomers) might have completely different chemical and/or physical properties if the atoms are connected differently or in different positions. In such cases, a structural formula can be useful, as it illustrates which atoms are bonded to which other ones. From the connectivity, it is often possible to deduce the approximate shape of the molecule.

A chemical formula supplies information about the types and spatial arrangement of bonds in the chemical, though it does not necessarily specify the exact isomer. For example ethane consists of two carbon atoms single-bonded to each other, with each carbon atom having three hydrogen atoms bonded to it. Its chemical formula can be rendered as CH3CH3. In ethylene there is a double bond between the carbon atoms (and thus each carbon only has two hydrogens), therefore the chemical formula may be written: CH2CH2, and the fact that there is a double bond between the carbons is implicit because carbon has a valence of four. However, a more explicit method is to write H2C=CH2 or less commonly H2C::CH2. The two lines (or two pairs of dots) indicate that a double bond connects the atoms on either side of them.

A triple bond may be expressed with three lines or pairs of dots, and if there may be ambiguity, a single line or pair of dots may be used to indicate a single bond.

Molecules with multiple functional groups that are the same may be expressed by enclosing the repeated group in round brackets. For example isobutane may be written (CH3)3CH. This semi-structural formula implies a different connectivity from other molecules that can be formed using the same atoms in the same proportions (isomers). The formula (CH3)3CH implies a central carbon atom attached to one hydrogen atom and three CH3 groups. The same number of atoms of each element (10 hydrogens and 4 carbons, or C4H10) may be used to make a straight chain molecule, butane: CH3CH2CH2CH3.

The alkene but-2-ene has two isomers which the chemical formula CH3CH=CHCH3 does not identify. The relative position of the two methyl groups must be indicated by additional notation denoting whether the methyl groups are on the same side of the double bond (cis or Z) or on the opposite sides from each other (trans or E).

For polymers, parentheses are placed around the repeating unit. For example, a hydrocarbon molecule that is described as CH3(CH2)50CH3, is a molecule with fifty repeating units. If the number of repeating units is unknown or variable, the letter n may be used to indicate this formula: CH3(CH2)nCH3.

For ions, the charge on a particular atom may be denoted with a right-hand superscript. For example Na+, or Cu2+. The total charge on a charged molecule or a polyatomic ion may also be shown in this way. For example: H3O+ or SO42−.

For more complex ions, brackets [ ] are often used to enclose the ionic formula, as in [B12H12]2−, which is found in compounds such as Cs2[B12H12]. Parentheses ( ) can be nested inside brackets to indicate a repeating unit, as in [Co(NH3)6]3+. Here (NH3)6 indicates that the ion contains six NH3 groups, and [ ] encloses the entire formula of the ion with charge +3.

Although isotopes are more relevant to nuclear chemistry or stable isotope chemistry than to conventional chemistry, different isotopes may be indicated with a prefixed superscript in a chemical formula. For example, the phosphate ion containing radioactive phosphorus-32 is 32PO43-. Also a study involving stable isotope ratios might include the molecule 18O16O.

A left-hand subscript is sometimes used redundantly to indicate the atomic number. For example, 8O2 for dioxygen, and 168O2 for the most abundant isotopic species of dioxygen. This is convenient when writing equations for nuclear reactions, in order to show the balance of charge more clearly.

In chemistry, the empirical formula of a chemical is a simple expression of the relative number of each type of atom or ratio of the elements in the compound. Empirical formulas are the standard for ionic compounds, such as CaCl2, and for macromolecules, such as SiO2. An empirical formula makes no reference to isomerism, structure, or absolute number of atoms. The term empirical refers to the process of elemental analysis, a technique of analytical chemistry used to determine the relative percent composition of a pure chemical substance by element.

The @ symbol ("at") indicates an atom or molecule trapped inside a cage but not chemically bound to it. This notation became popular in the 1990s with the discovery of fullerene cages, which can trap atoms such as La to form La@C60 or La@C82 for example. A non-fullerene example is [As@Ni12As20]3-, an ion in which one As atom is trapped in a cage formed by the other 32 atoms.

Chemical formulas most often use integers for each element. However, there is a whole class of compounds, called non-stoichiometric compounds, that cannot be represented by small integers. Such a formula might be written using decimal fractions, as in Fe0.95O, or it might include a variable part represented by a letter, as in Fe1–xO, where x is normally much less than 1.

Chemical formula used for a series of compounds that differ from each other by a constant unit is called general formula. Such a series is called the homologous series, while its members are called homologs.
For example alcohols: CnH(2n + 1)OH (n ≥ 1)

The Hill system is a system of writing chemical formulas such that the number of carbon atoms in a molecule is indicated first, the number of hydrogen atoms next, and then the number of all other chemical elements subsequently, in alphabetical order. When the formula contains no carbon, all the elements, including hydrogen, are listed alphabetically. This deterministic system enables straightforward sorting and searching of compounds.