Voyager program
This article is about the unmanned space probes of the 1970s. For other uses, see Voyager. 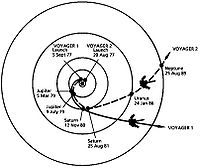 The Voyager program is a U.S program that launched two unmanned space missions, scientific probes Voyager 1 and Voyager 2. They were launched in 1977 to take advantage of a favorable planetary alignment of the late 1970s. Although officially designated to study just Jupiter and Saturn, the probes were able to continue their mission into the outer solar system, and are as of June 2011[update] on course to exit the solar system. These probes were built at JPL and were funded by NASA. Voyager 1 is currently the farthest human-made object from Earth.

Both missions have gathered large amounts of data about the gas giants of the solar system, of which little was previously known. In addition, the spacecraft trajectories have been used to place limits on the existence of a hypothetical trans-Plutonian Planet X.

Location and approximate trajectories of Pioneer and Voyager spacecraft as of April 4, 2007

The Voyager probes were originally conceived as part of the Mariner program, and designated Mariner 11 and Mariner 12, respectively. They were then moved into a separate program named Mariner Jupiter-Saturn, later retitled Voyager because it was felt that the probes' designs had moved sufficiently far from the Mariner family that they merited a separate name.[1] Voyager is essentially a scaled-back version of the Grand Tour program of the late 1960s and early 1970s. The Grand Tour's plan was to send a pair of probes to fly by all the outer planets; it was scaled back because of budget cuts. In the end, Voyager fulfilled all the Grand Tour flyby objectives except for Pluto, which at the time was considered a planet by the IAU.

Of the pair, Voyager 2 was launched first. Its trajectory was designed to take advantage of an unusually convenient alignment of the planets allowing the inclusion of Uranus and Neptune fly-bys in the probe's mission. Voyager 1 was launched after its sister probe, but on a faster trajectory which enabled it to reach Jupiter and Saturn sooner at the cost of not visiting the outer planets. Although Pluto was possible in its trajectory, it was eventually decided to make a close fly-by of Titan while examining Saturn instead, which would preclude a later fly-by of Pluto.[2]

In the 1990s Voyager 1 overtook the slower Pioneer 10 to become the most distant man-made object from Earth, a record it will keep until mankind develops newer, radically faster forms of space propulsion than are currently known—even the faster (at launch) New Horizons probe will not pass it, since the final speed of New Horizons (after maneuvering within the solar system) will be less than the current speed of Voyager 1. Voyager 1 and Pioneer 10 are also the most widely separated man-made objects in the universe, because they are traveling in roughly opposite directions from the solar system.

Periodic contact has been maintained with Voyager 1 and Voyager 2 to monitor conditions in the outer expanses of the solar system. The crafts' radioactive power sources were still producing electrical power as of 2011[update], and it is hoped that this will allow the solar system's heliopause to be located. In late 2003 Voyager 1 began sending data that seemed to indicate it had crossed the termination shock, but interpretations of these data are in dispute, and it was later believed that the termination shock was crossed in December 2004. The heliopause remains an unknown distance ahead.

On December 10, 2007, instruments on board Voyager 2 sent data back to Earth indicating that the solar system is asymmetrical. It has also reached the termination shock, about 10 billion miles from where Voyager 1 first crossed it, and is traveling outward at roughly 3.3 AU a year.

In August 2009 Voyager 1 was over 16.5 terameters (16.5×1012 meters, or 16.5×109 km, 110.7 AU, or 10.2 billion miles) from the Sun, and thus had entered the heliosheath region between the solar wind's termination shock and the heliopause (the limit of the solar wind). Beyond the heliopause is the bow shock of the interstellar medium, beyond which the probes enter interstellar space and the Sun's gravitational influence on them is exceeded by that of the Milky Way galaxy in general. At the heliopause light from the Sun takes over 16 hours to reach the probe.

By December 2010 Voyager 1 had reached a region of space where there was no net velocity of the solar wind. At this point, the wind from the Sun may be canceled out by the interstellar wind. It does not appear that the spacecraft has yet crossed the heliosheath into interstellar space.[3]

On Friday, June 10, 2011, "Scientists studying the Voyager data noticed what may be giant magnetic bubbles located in the heliosphere, the region of our solar system that separates us from the violent solar winds of interstellar space. The bubbles, scientists believe, form when the sun's magnetic field becomes warped at the edge of our solar system."[4] 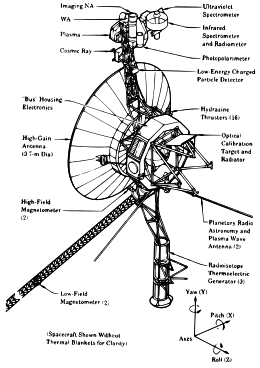 The Voyager spacecraft weighs 773 kilograms. Of this, 105 kilograms are scientific instruments.[5] The identical Voyager spacecraft are three-axis stabilized systems that use celestial or gyro referenced attitude control to maintain pointing of the high-gain antennas toward Earth. The prime mission science payload consisted of 10 instruments (11 investigations including radio science).

The diagram at the right shows the 3.66 meter diameter high-gain antenna (HGA) attached to the hollow ten-sided polygonal electronics bus, with the spherical tank within containing hydrazine propulsion fuel.

The Voyager Golden Record is attached to one of the bus sides. The angled square panel to the right is the optical calibration target and excess heat radiator. The three radioisotope thermoelectric generators (RTGs) are mounted end-to-end on the lower boom.

The scan platform comprises: the Infrared Interferometer Spectrometer (IRIS) (largest camera at top right); the Ultraviolet Spectrometer (UVS) just above the UVS; the two Imaging Science Subsystem (ISS) vidicon cameras to the left of the UVS; and the Photopolarimeter System (PPS) under the ISS.

The FDS configures each instrument and controls instrument operations. It also collects engineering and science data and formats the data for transmission. The DTR is used to record high-rate Plasma Wave Subsystem (PWS) data. The data is played back every six months.

The Imaging Science Subsystem, made up of a wide angle and a narrow angle camera, is a modified version of the slow scan vidicon camera designs that were used in the earlier Mariner flights. The Imaging Science Subsystem consists of two television-type cameras, each with 8 filters in a commandable Filter Wheel mounted in front of the vidicons. One has a low resolution 200 mm wide-angle lens with an aperture of f/3 (Wide Angle Camera), while the other uses a higher resolution 1500 mm narrow-angle f/8.5 lens (Narrow Angle Camera).

Unlike the other onboard instruments, operation of the cameras is not autonomous, but is controlled by an imaging parameter table residing in one of the spacecraft computers, the Flight Data Subsystem (FDS). Modern spacecraft (post 1990) typically have fully autonomous cameras.

The computer command subsystem (CCS) provides sequencing and control functions. The CCS contains fixed routines such as command decoding and fault detection and corrective routines, antenna pointing information, and spacecraft sequencing information. The computer is an improved version of that used in the Viking orbiter.[9] The custom built CCS systems on both craft are identical. There is only a minor software modification for one craft that has a scientific subsystem the other lacks.

The Attitude and Articulation Control Subsystem (AACS) controls the spacecraft orientation, maintains the pointing of the high-gain antenna towards Earth, controls attitude maneuvers, and positions the scan platform. The custom built AACS systems on both craft are identical.

It is widely reported on the web that the Voyager spacecraft were controlled by a version of the RCA CDP1802 "COSMAC" microprocessor, but such claims are not substantiated by primary references. The CDP1802 was used in the later Galileo spacecraft. The Voyager systems were based on RCA CD4000 radiation hardened Sapphire on Silicon (SOS) custom chips, and some TI 54L ICs.

Uplink communications is via S band (16-bit/s command rate) while an X band transmitter provides downlink telemetry at 160 bit/s normally and 1.4 kbit/s for playback of high-rate plasma wave data. All data is transmitted from and received at the spacecraft via the 3.7-meter high-gain antenna.

Electrical power is supplied by three radioisotope thermoelectric generators (RTGs). They are powered by plutonium-238 (distinct from the Pu-239 isotope used in nuclear weapons) and provided approximately 470 W at 30 volts DC when the spacecraft was launched. Plutonium-238 decays with a half-life of 87.74 years,[10] so RTGs using Pu-238 will lose a factor of 1 - 0.5{1/87.74} = 0.78% of their power output per year.

In 2011, 34 years after launch, such an RTG would inherently produce 470 W × 2-(34/87.74) ≈ 359 W, about 76% of its initial power. Additionally, the thermocouples that convert heat into electricity also degrade, reducing available power below this calculated level.

By September 25, 2009 the power generated by Voyager 1 and Voyager 2 had dropped to 276.4 W and 277.6 W respectively, about 58% of the power at launch. The level of power output was better than pre-launch predictions based on a conservative thermocouple degradation model. As the electrical power decreases, spacecraft loads must be turned off, eliminating some capabilities.

The Voyager primary mission was completed in 1989, with the close flyby of Neptune by Voyager 2. The Voyager Interstellar Mission (VIM) is a mission extension, which began when the two spacecraft had already been in flight for over 12 years.[11] The Heliophysics Division of the NASA Science Mission Directorate conducted a Heliophysics Senior Review in 2008. The panel found that the VIM "is a mission that is absolutely imperative to continue" and that VIM "funding near the optimal level and increased DSN (Deep Space Network) support is warranted."[12]

As of the present date, the Voyager 2 and Voyager 1 scan platforms, including all of the platform instruments, have been powered down. The ultraviolet spectrometer (UVS)[13] on Voyager 1 was active until 2003, when it too was deactivated. Gyro operations will end in 2015 for Voyager 2 and 2016 for Voyager 1. Gyro operations are used to rotate the probe 360 degrees six times a year to measure the magnetic field of the spacecraft, which is then subtracted from the magnetometer science data.

The two Voyager spacecraft continue to operate, with some loss in subsystem redundancy, but retain the capability of returning scientific data from a full complement of Voyager Interstellar Mission (VIM) science instruments.

The telemetry comes to the telemetry modulation unit (TMU) separately as a "low-rate" 40-bit-per-second (bit/s) channel and a "high-rate" channel.

Low rate telemetry is routed through the TMU such that it can only be downlinked as uncoded bits (in other words there is no error correction). At High rate, one of a set of rates between 10 bit/s and 115.2 kbit/s is downlinked as coded symbols.

The TMU encodes the high rate data stream with a convolutional code having constraint length of 7 with a symbol rate equal to twice the bit rate (k=7, r=1/2)

Note: At 160 and 600 bit/s different data types are interleaved.

It is understood that there is substantial overlap of EL-40 and CR-5T (ISA 35395) telemetry, but the simpler EL-40 data does not have the resolution of the CR-5T telemetry. At least when it comes to representing available electricity to subsystems, EL-40 only transmits in integer increments—so similar behaviours are expected elsewhere.

Voyager 1 and 2 both carry with them a golden record that contains pictures and sounds of Earth, along with symbolic directions for playing the record and data detailing the location of Earth. The record is intended as a combination time capsule and interstellar message to any civilization, alien or far-future human, that recovers either of the Voyager craft. The contents of this record were selected by a committee chaired by Carl Sagan. 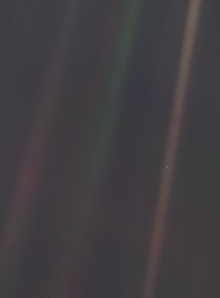 Seen from 6 billion kilometres (3.7 billion miles), Earth appears as a "pale blue dot" (the blueish-white speck approximately halfway down the brown band to the right).

The Voyager program's discoveries during the primary phase of its mission, including striking never-before-seen close-up color photos of the major planets, were regularly documented by both print and electronic media outlets. Among the best-known of these is an image of the Earth as a pale blue dot, taken in 1990 by Voyager 1, and popularised by Carl Sagan.