Dawn is a NASA spacecraft launched with some European cooperation (with partners in Germany, Italy, and the Netherlands providing the spacecraft with framing cameras, a mapping spectrometer, and a solar array, respectively). The Dawn mission is managed by NASA's Jet Propulsion Laboratory, a division of the California Institute of Technology in Pasadena, for NASA's Science Mission Directorate in Washington, D.C., and was tasked with the exploration and study of the two largest members of the asteroid belt — Vesta and the dwarf planet Ceres. Launched on September 27, 2007, Dawn reached Vesta on July 16, 2011, and will orbit and explore it until 2012. The spacecraft is scheduled to reach Ceres in 2015. It will be the first spacecraft to visit either body.

Dawn is intended to be the first spacecraft to orbit two extraterrestrial bodies (or three, counting the Sun), using an innovative ion drive to travel between its targets. All multi-target missions using conventional drives, such as the Voyager program, were restricted to flybys.[3] Dawn is NASA’s first purely exploratory mission to use ion propulsion. 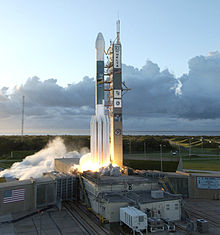 Dawn was launched on 27 September 2007 from pad 17-B at the Cape Canaveral Air Force Station on a Delta 7925-H rocket.[4] Its original scheduled launch date was three months earlier on 20 June, but it suffered many interruptions and delays.

On 10 April 2007, the spacecraft arrived at the Astrotech Space Operations subsidiary of SPACEHAB, Inc. in Titusville, Florida, where it was prepared for launch.[5][6] The launch was originally scheduled for June 20, but was delayed until June 30 due to delays with part deliveries.[7] A broken crane at the launch pad, used to raise the solid rocket boosters, further delayed the launch for a week, until July 7, but on June 15 the second stage was successfully hoisted into position.[8][9] A mishap at the Astrotech Space Operations facility, involving slight damage to one of the solar arrays, did not have an effect on the launch date; however, bad weather caused the launch to slip to July 8. Range tracking problems then delayed the launch to July 9, and then July 15. Launch planning was then suspended in order to avoid conflicts with the Phoenix mission to Mars, which was successfully launched on August 4.

The launch of Dawn was first rescheduled for September 26, 2007,[10][11] then September 27, due to bad weather delaying fueling of the second stage, the same problem which had earlier delayed the July 7 launch attempt. The launch window extended from 07:20–07:49 EDT (11:20–11:49 GMT).[12] During the final built-in hold at T−4 minutes, a ship entered the exclusion area offshore, the strip of ocean where the rocket boosters were likely to fall after separation. After commanding the ship to leave the area, the launch was required to wait for the end of a collision avoidance window with the International Space Station.[13] The spacecraft finally launched at 07:34 EDT from pad 17-B on a Delta II launch vehicle,[14][15][16] propelling Dawn to a velocity of 11.46 kilometers per second (25,600 miles per hour) relative to Earth.[17] Thereafter, Dawn's ion thrusters took over.

After initial checkout, during which the ion thrusters accumulated more than 11 days of thrust, Dawn began long-term cruise propulsion on December 17, 2007.[18] On October 31, 2008, Dawn completed its first thrusting phase to send it on to Mars for a gravity assist flyby in February 2009. During this first interplanetary cruise phase, Dawn spent 270 days, or 85% of this phase, using its thrusters. It expended less than 72 kilograms (158 pounds) of xenon propellant for a total change in velocity of 1.81 kilometers per second (4050 miles per hour). On November 20, 2008, Dawn performed its first trajectory correction maneuver (TCM1), firing its number 1 thruster for 2 hours, 11 minutes. Following Dawn's solar conjunction, a course correction maneuver originally scheduled for January 2009 was determined not necessary. 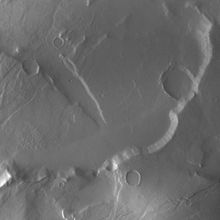 Dawn made its closest approach (549 km) to Mars on February 17, 2009 during a successful gravity assist.[19][20] On this day, the spacecraft placed itself in safe mode, resulting in some data acquisition loss. The spacecraft was reported to be back in full operation two days later, with no impact on the subsequent mission identified. The root cause of the event was reported to be a software programming error.[21]

On May 3, 2011, Dawn acquired its first targeting image 1.2 million kilometers from Vesta, and began its approach phase to the asteroid.[22] On June 12, Dawn's speed relative to Vesta was slowed in preparation for its orbital insertion 34 days later.[23]

Dawn was scheduled to be inserted into orbit at 05:00 UTC on July 16 after a period of thrusting with its ion engines. Because its antenna is pointed away from the Earth during thrusting, scientists were not able to immediately confirm whether or not Dawn successfully made the maneuver. The spacecraft would then reorient itself and was scheduled to check in at 06:30 UTC on July 17.[24] NASA later confirmed that it received telemetry from Dawn indicating that the spacecraft successfully entered orbit around Vesta.[25] The exact time of insertion has not been confirmed as it depended on Vesta's mass distribution, which has only been estimated.[26] 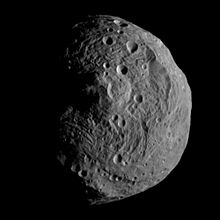 The mission's goal is to characterize the conditions and processes of the solar system's earliest eon by investigating in detail two of the largest protoplanets remaining intact since their formation. Ceres and Vesta have many contrasting characteristics that are thought to have resulted from them forming in two different regions of the early solar system; Peter Thomas of Cornell University has proposed that Ceres has a differentiated interior;[27] its oblateness appears too small for an undifferentiated body, which indicates that it consists of a rocky core overlain with an icy mantle.[27] There is a large collection of potential samples from Vesta accessible to scientists, in the form of over 200 HED meteorites, giving insight into Vestian geologic history and structure. Vesta is thought to consist of a metallic iron–nickel core, an overlying rocky olivine mantle, with a surface crust.[28][29][30] 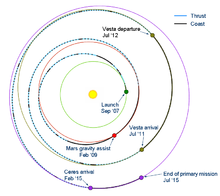 To cruise from Earth to its targets, Dawn traveled in a long outward spiral trajectory. NASA posts and continually updates the current location and status of Dawn online.[31] The estimated chronology is as follows:[32]

An extended mission following the completion of the Ceres study is also possible, although unlikely, as greater return is expected by spending the available time at Vesta and Ceres.[33] Although 2 Pallas would have been a feasible extended target for the originally scheduled launch date, launch delays have meant that this may no longer be the case. Fuel was also not specifically allocated to break orbit from Ceres, and will depend upon the details of the flight reaching Ceres.

The Dawn spacecraft carries a suite of three instruments built by three countries: a framing camera from Germany, a visual and infrared spectrometer from Italy and a gamma ray and neutron detector from the United States. 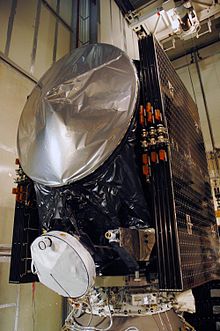 Dawn waits for encapsulation at its launch pad on July 1, 2007

Dawn is intended to study two large bodies in the asteroid belt in order to answer questions about the formation of the solar system, as well as to test the feasibility of its ion drive.

Ceres and Vesta were chosen as two contrasting protoplanets, the first one apparently "wet" (that is, icy) and the other "dry" (or rocky), whose accretion was terminated by the formation of Jupiter. They provide a bridge in our understanding between the formation of rocky planets and the icy bodies of our solar system, and under what conditions a rocky planet can hold water.[43]

The IAU adopted a new definition of planet on August 24, 2006, which introduced the term "dwarf planet" for ellipsoidal worlds that were too small to qualify for planetary status by "clearing their neighborhood". If the IAU's definition stands and the spacecraft experiences no delays, Dawn will become the first mission to study a dwarf planet, arriving at Ceres five months prior to the arrival of New Horizons at Pluto.

Ceres is a dwarf planet whose mass comprises about one-third of the total mass of the bodies in the asteroid belt and whose spectral characteristics suggest a composition similar to that of a water-rich carbonaceous chondrite.[44] Smaller Vesta, a water-poor achondritic asteroid, has experienced significant heating and differentiation. It shows signs of a metallic core, a Mars-like density and lunar-like basaltic flows.[45]

Both bodies formed very early in the history of the solar system, thereby retaining a record of events and processes from the time of the formation of the terrestrial planets. Radionuclide dating of pieces of meteorites thought to come from Vesta suggests that Vesta differentiated quickly, in only three million years. Thermal evolution studies suggest that Ceres must have formed a little later, more than three million years after the formation of CAIs (the oldest known objects of Solar System origin).[46]

Moreover, Vesta is the source of many smaller objects in the solar system. Most (but not all) V-type near-Earth asteroids, and some outer main-belt asteroids, have spectra similar to Vesta, and are thus known as vestoids. Five percent of the meteoritic samples found on Earth, the Howardite Eucrite Diogenite ("HED") meteorites, are thought to be the result of a collision or collisions with Vesta.

The status of the Dawn mission has changed several times. In December 2003, the project was first cancelled,[47] and then reinstated in February 2004. In October 2005, work on Dawn was placed in "stand down" mode. In January 2006, Dawn's "stand down" was discussed in the press as "indefinitely postponed", even though NASA had announced no new decisions regarding the mission's status.[48] On March 2, 2006, Dawn was publicly, but not formally canceled by NASA headquarters.[49]

The spacecraft's manufacturer, Orbital Sciences Corporation, appealed the decision and offered to build the spacecraft at cost, forgoing any profit in order to gain experience in a new market field. NASA then put the cancellation under review,[50] and on March 27, 2006, it was announced that the mission would not be canceled after all.[51][52] In the last week of September 2006, the Dawn mission instrument payload integration reached a full functional status. Although originally projected to cost US$373,000,000, after cost overruns, the final cost of the mission was US$446,000,000 in 2007.[53]

A magnetometer and laser altimeter were considered but not flown.

The Dawn spacecraft is propelled by three xenon ion thrusters which inherited engineering technology from the DS1 spacecraft.[54] They have a specific impulse of 3,100 s and produce a thrust of 90 mN.[55] The whole spacecraft, including the ion propulsion thrusters, is powered by a 10 kW (at 1 AU) triple-junction photovoltaic solar array manufactured by Dutch Space.[56][57] To get to Vesta, Dawn is allocated 275 kg (606 lb) of xenon, with another 110 kg (243 lb) to reach Ceres,[58] out of a total capacity of 425 kg (937 pounds) of on-board propellant.[59] With the propellant it carries, it can perform a velocity change of over 10 km/s, far more than any other spacecraft has done with onboard propellant after separation from the launch rocket.[58] Dawn is NASA’s first purely exploratory mission to use ion propulsion engines.[60]

Onboard Dawn is a small computer microchip bearing the names of more than 360,000 space enthusiasts.[61] The names were submitted online as part of a public outreach effort between September 2005 and November 4, 2006.[62] The microchip (about the size of a United States nickel coin) was installed on 17 May 2007 above the forward ion thruster, underneath the spacecraft's high-gain antenna.[63] More than one microchip was made, with a back-up copy on display at the 2007 Open House at the Jet Propulsion Laboratory in Pasadena, California.

As Dawn approached Vesta, it could take progressively higher-resolution images. The images were taken by the Framing Camera instrument, and published online and at news conferences by NASA and MPI.

After entering orbit (captured by Vesta's gravity), it moved itself to a lower, closer orbit by running its xenon ion rocket engine via solar power.