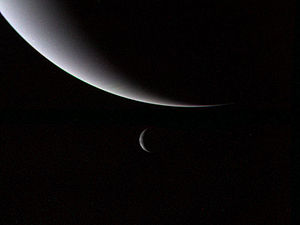 Neptune has thirteen known moons, by far the largest of which is Triton, discovered by William Lassell on October 10, 1846, just 17 days after the discovery of Neptune itself. Over a century passed before the discovery of the second natural satellite, called Nereid. Neptune's moons are named for minor water deities in Greek mythology.

Unique among all large planetary moons, Triton is an irregular satellite, as its orbit is retrograde to Neptune's rotation and inclined relative to the planet's equator. The next-largest irregular satellite in the Solar System, Saturn's moon Phoebe, is only 0.03% Triton's mass. Triton is massive enough to have achieved hydrostatic equilibrium and to retain a thin atmosphere capable of forming clouds and hazes. Both its atmosphere and its surface are composed mainly of nitrogen with small amounts of methane and carbon monoxide. Triton's surface appears relatively young, and was probably modified by internally driven processes within the last few million years. The temperature at its surface is about 38 K (−235.2 °C).

Inward of Triton are six regular satellites, all of which have prograde orbits in planes that lie close to Neptune's equatorial plane. Some of these orbit among Neptune's rings. The largest of them is Proteus.

Neptune also has six outer irregular satellites, including Nereid, whose orbits are much farther from Neptune, have high inclinations, and are mixed between prograde and retrograde. The two outermost ones, Psamathe and Neso, have the largest orbits of any natural satellites discovered in the Solar System to date.

Simulated view of Neptune in the hypothetical sky of Triton

Triton was discovered by William Lassell in 1846, just seventeen days after the discovery of Neptune.[1] Nereid was discovered by Gerard P. Kuiper in 1949.[2] The third moon, later named Larissa, was first observed by Harold J. Reitsema, William B. Hubbard, Larry A. Lebofsky and David J. Tholen on May 24, 1981. The astronomers were observing a star's close approach to Neptune, looking for rings similar to those discovered around Uranus four years earlier.[3] If rings were present, the star's luminosity would decrease slightly just before the planet's closest approach. The star's luminosity dipped only for several seconds, which meant that it was due to a moon rather than a ring.

Triton did not have an official name until the twentieth century. The name "Triton" was suggested by Camille Flammarion in his 1880 book Astronomie Populaire,[7] but it did not come into common use until at least the 1930s.[8] Until this time it was usually simply known as "the satellite of Neptune". Other moons of Neptune are also named for Greek and Roman water gods, in keeping with Neptune's position as god of the sea:[9] either from Greek mythology, usually children of Poseidon, the Greek Neptune (Triton, Proteus, Despina, Thalassa); classes of minor Greek water deity (Naiad, Nereid); or specific Nereids (Halimede, Galatea, Neso, Sao, Laomedeia, Psamathe).[9]

Two asteroids share the same names as moons of Neptune: 74 Galatea and 1162 Larissa.

The moons of Neptune can be divided into two groups: regular and irregular. The first group includes the six inner moons, which follow circular prograde orbits lying in the equatorial plane of Neptune. The second group consists of all other moons including Triton. They generally follow inclined eccentric and often retrograde orbits far from Neptune; the only exception is Triton, which orbits close to the planet following a circular orbit, though retrograde.[10]

In order of distance from Neptune, the regular moons are Naiad (moon), Thalassa (moon), Despina, Galatea, Larissa and Proteus. Naiad, the closest regular moon, is also the smallest among the inner moons, while Proteus is the largest regular moon. The inner moons are closely associated with Neptune's rings. The two innermost satellites, Naiad and Thalassa, orbit between the Galle and LeVerrier rings.[4] Despina may be a shepherd moon of the LeVerrier ring, as its orbit lies just inside this ring.[11]

The next moon, Galatea, orbits just inside the most prominent of Neptune's rings, the Adams ring.[11] This ring is very narrow, with a width not exceeding 50 km,[12] and has five embedded bright arcs.[11] The gravity of Galatea helps confine the ring particles within a limited region in the radial direction, maintaining the narrow ring. Various resonances between the ring particles and Galatea may also have a role in maintaining the arcs.[11]

Only the two outer largest regular moons have been imaged with a resolution sufficient to discern their shapes and surface features.[4] Larissa, about 200 km in diameter, is elongated. Proteus is not significantly elongated, but not fully spherical either:[4] it resembles an irregular polyhedron, with several flat or slightly concave facets 150 to 250 km in diameter.[13] At about 400 km, it is larger than the Saturnian moon Mimas, which is fully spherical. This difference may be due to a past collisional disruption of Proteus.[14] The surface of Proteus is heavily cratered and shows a number of linear features. Its largest crater, Pharos, is more than 150 km in diameter.[4][13]

All of Neptune's inner moons are dark objects: their geometrical albedo ranges from 7 to 10%.[15] Their spectra indicate that they are made from water ice contaminated by some very dark material, probably complex organic compounds. In this respect, the inner Neptunian moons are similar to the inner moons of Uranus.[4] 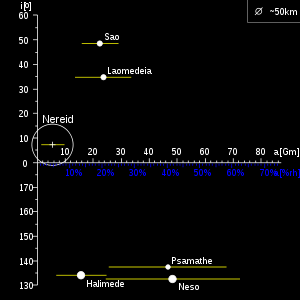 The diagram illustrates the orbits of Neptune’s irregular moons excluding Triton. The eccentricity is represented by the yellow segments extending from the pericenter to apocenter with the inclination represented on Y axis. The moons above the X axis are prograde, those beneath are retrograde. The X axis is labeled in Gm and the fraction of the Hill sphere's radius.

Triton follows a retrograde and quasi-circular orbit, and is thought to be a gravitationally captured satellite. It is the second known moon in the Solar System to have a substantial atmosphere, which is primarily nitrogen with small amounts of methane and carbon monoxide.[16] The pressure on Triton's surface is about 14 μbar.[16] In 1986 the Voyager 2 spacecraft observed what appeared to be clouds and hazes in this thin atmosphere.[4] Triton is one of the coldest bodies in the Solar System, with a surface temperature of about 38 K (−235.2 °C).[16] Its surface is covered by nitrogen, methane, carbon dioxide and water ices[17] and has a high geometrical albedo of more than 70%.[4] The Bond albedo is even higher, reaching up to 90%.[4] Surface features include the large southern polar cap, older cratered planes cross-cut by graben and scarps, as well as youthful features probably formed by endogenic processes like cryovolcanism.[4] Voyager 2 observations revealed a number of active geysers within the polar cap heated by the Sun, which eject plumes to the height of up to 8 km.[4] Triton has a relatively high density of about 2 g/cm3 indicating that rocks constitute about two thirds of its mass, and ices (mainly water ice) the remaining one third. There may be a layer of liquid water deep inside Triton, forming a subterranean ocean.[18]

Nereid is the third largest moon of Neptune. It has a prograde but very eccentric orbit and is believed to be a former regular satellite that was shifted to its current orbit through gravitational interactions during Triton's capture.[19] Water ice has been spectroscopically detected on its surface. Nereid shows irregular large variations of its visible magnitude, which are probably caused by forced precession or chaotic rotation combined with an elongated shape and bright or dark spots on the surface.[20]

Among the remaining irregular moons, Sao and Laomedeia follow prograde orbits, while Halimede, Psamathe and Neso follow retrograde orbits. Given the similarity of their orbits, it was suggested that Neso and Psamathe could have a common origin in the break-up of a larger moon.[6] Psamathe and Neso have the largest orbits of any natural satellites discovered in the Solar system to date. They take 25 years to orbit Neptune at an average of 125 times the distance between Earth and the Moon. Neptune has the largest Hill sphere in the solar system, owing primarily to its large distance from the Sun; this allows it to retain control of such distant moons.[10]

The mass distribution of the Neptunian moons is the most lopsided of any group of satellites in the Solar System. One moon, Triton, makes up nearly all of the mass of the system, with all other moons together comprising only one third of one percent. This may be because Triton was captured well after the formation of Neptune's original satellite system, much of which would have been destroyed in the process of capture.[19][21]

The relative masses of the Neptunian moons

Triton's orbit upon capture would have been highly eccentric, and would have caused chaotic perturbations in the orbits of the original inner Neptunian satellites, causing them to collide and reduce to a disc of rubble.[19] This means it is likely that Neptune's present inner satellites are not the original bodies that formed with Neptune. Only after Triton's orbit became circularised could some of the rubble re-accrete into the present-day regular moons.[14] It is possible that because of this great perturbation, the satellite system of Neptune does not follow the 10,000:1 ratio of mass between the parent planet versus all its moons seen in all other gas giants.[22]

The mechanism of Triton’s capture has been the subject of several theories over the years. One of them postulates that Triton was captured in a three-body encounter. In this scenario, Triton is the surviving member of a binary[note 1] disrupted by its encounter with Neptune.[23]

Numerical simulations show that there is a 0.41 probability that the moon Halimede collided with Nereid at some time in the past.[5] Although it is not known whether any collision has taken place, both moons appear to have similar ("grey") colors, implying that Halimede could be a fragment of Nereid.[24]

The Neptunian moons are listed here by orbital period, from shortest to longest. Irregular (captured) moons are marked by color.