/ˈmaɪməs/;[8] Greek: Μίμᾱς) is a moon of Saturn which was discovered in 1789 by William Herschel.[9] It is named after Mimas, a son of Gaia in Greek mythology, and is also designated Saturn I.

By diameter (396 kilometers) the twentieth-largest moon in the Solar System, Mimas is the smallest known astronomical body that is thought to be rounded in shape due to self-gravitation.

Mimas was discovered by the astronomer William Herschel on 17 September 1789. He recorded his discovery as follows: "The great light of my forty-foot telescope was so useful that on the 17th of September, 1789, I remarked the seventh satellite, then situated at its greatest western elongation."[10]

Mimas is named after one of the Titans in Greek mythology, Mimas. The names of all seven then-known satellites of Saturn, including Mimas, were suggested by William Herschel's son John in his 1847 publication Results of Astronomical Observations made at the Cape of Good Hope.[11][12] He named them after Titans specifically because Saturn (the Roman equivalent of Kronos in Greek mythology), was the leader of the Titans and ruler of the world for some time.

For more details on this topic, see List of geological features on Mimas. 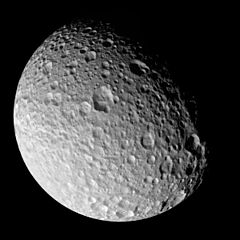 The low density of Mimas, 1.15 g/cm3, indicates that it is composed mostly of water ice with only a small amount of rock. Due to the tidal forces acting on it, the moon is not perfectly spherical; its longest axis is about 10% longer than the shortest. The ellipsoid shape of Mimas is especially noticeable in recent images from the Cassini probe.

Mimas' most distinctive feature is a colossal impact crater 130 kilometres (81 mi) across, named Herschel after the moon's discoverer. Herschel's diameter is almost a third of the moon's own diameter; its walls are approximately 5 kilometres (3.1 mi) high, parts of its floor measure 10 kilometres (6.2 mi) deep, and its central peak rises 6 kilometres (3.7 mi) above the crater floor. If there were a crater of an equivalent scale on Earth it would be over 4,000 kilometres (2,500 mi) in diameter, wider than Australia. The impact that made this crater must have nearly shattered Mimas: fractures can be seen on the opposite side of Mimas that may have been created by shock waves from the impact travelling through the moon's body.[citation needed]

The surface of Mimas is saturated with smaller impact craters, but no others are anywhere near the size of Herschel. Although Mimas is heavily cratered, the cratering is not uniform. Most of the surface is covered with craters greater than 40 kilometres (25 mi) in diameter, but in the south polar region, craters greater than 20 kilometres (12 mi) are generally lacking.

A number of features in Saturn's rings are related to resonances with Mimas. Mimas is responsible for clearing the material from the Cassini Division, the gap between Saturn's two widest rings, the A ring and B ring. Particles in the Huygens Gap at the inner edge of the Cassini division are in a 2:1 resonance with Mimas. They orbit twice for each orbit of Mimas. The repeated pulls by Mimas on the Cassini division particles, always in the same direction in space, force them into new orbits outside the gap. The boundary between the C and B ring is in a 3:1 resonance with Mimas. Recently, the G ring was found to be in a 7:6 co-rotation eccentricity resonance with Mimas; the ring's inner edge is about 15,000 kilometres (9,300 mi) inside Mimas' orbit.[citation needed]

When seen from certain angles, Mimas closely resembles the Death Star, a fictional space station known from the film Star Wars Episode IV: A New Hope, which is said to be roughly 140 kilometres in diameter. This resemblance stems from the fact that Herschel can appear in Mimas' northern hemisphere, much like the concave disc of the Death Star's "superlaser". This is purely coincidental, as the first film was made three years before the first close-up photographs of Mimas were taken.[14]

In 2010, NASA revealed a temperature map of Mimas, using images obtained by Cassini. The warmest regions, which are along one edge of the moon, create a shape similar to the video game character Pac-Man, with Herschel Crater assuming the role of an "edible dot" known from Pac-Man gameplay.[15][16][17]

This audio file was created from a revision of Mimas (moon) dated 2010-01-10, and does not reflect subsequent edits to the article. (Audio help)
More spoken articles