Deep Space Network
This article is about the deep space communication network of JPL and NASA. For the network of low cost interplanetary trajectories, see Interplanetary Transport Network. 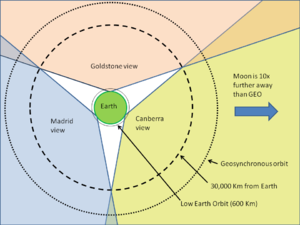 View from the Earth's north pole, showing the field of view of the main DSN antenna locations. Once a mission gets more than 30,000 KM from earth, it is always in view of at least one of the stations.

Tracking vehicles in deep space is quite different from tracking missions in low Earth orbit (LEO). Deep space missions are visible for long periods of time from a large portion of the Earth's surface, and so require few stations (the DSN has only three main sites). These few stations, however, require huge antennas, ultra-sensitive receivers, and powerful transmitters in order to transmit and receive over the vast distances involved.

Deep space is defined in two different ways. The first is when a mission gets sufficiently far from Earth that it is always in view of one of the tracking stations. This distance, about 20-30,000 km or 10-16,000 miles, was the definition used during Apollo and early days of the DSN.[1] The more modern definition is from the International Telecommunications Union, which sets aside various frequency bands for deep space and near Earth use. According to this definition, deep space starts at a distance of 2,000,000 km from the Earth's surface.[2]

The forerunner of the DSN was established in January 1958, when JPL, then under contract to the U.S. Army, deployed portable radio tracking stations in Nigeria, Singapore, and California to receive telemetry and plot the orbit of the Army-launched Explorer 1, the first successful U.S. satellite.[3] NASA was officially established on October 1, 1958, to consolidate the separately developing space-exploration programs of the US Army, US Navy, and US Air Force into one civilian organization.[4]

On December 3, 1958, JPL was transferred from the US Army to NASA and given responsibility for the design and execution of lunar and planetary exploration programs using remotely-controlled spacecraft. Shortly after the transfer NASA established the concept of the Deep Space Network as a separately managed and operated communications system that would accommodate all deep space missions, thereby avoiding the need for each flight project to acquire and operate its own specialized space communications network. The DSN was given responsibility for its own research, development, and operation in support of all of its users. Under this concept, it has become a world leader in the development of low-noise receivers; large parabolic-dish antennas; tracking, telemetry, and command systems; digital signal processing; and deep space navigation.

The largest antennas of the DSN are often called on during spacecraft emergencies. Almost all spacecraft are designed so normal operation can be conducted on the smaller (and more economical) antennas of the DSN, but during an emergency the use of the largest antennas is crucial. This is because a troubled spacecraft may be forced to use less than its normal transmitter power, attitude control problems may preclude the use of high-gain antennas, and recovering every bit of telemetry is critical to assessing the health of the spacecraft and planning the recovery. The most famous example is the Apollo 13 mission, where limited battery power and inability to use the spacecraft's high gain antennas reduced signal levels below the capability of the Manned Space Flight Network, and the use of the biggest DSN antennas (and the Australian Parkes Observatory radio telescope) was critical to saving the lives of the astronauts. While Apollo was also a US mission, DSN provides this emergency service to other space agencies as well, in a spirit of inter-agency and international cooperation. For example, the recovery of the Solar and Heliospheric Observatory (SOHO) mission of the European Space Agency (ESA) would not have been possible without the use of the largest DSN facilities.

DSN and the Apollo program

Although normally tasked with tracking unmanned spacecraft, the Deep Space Network (DSN) also contributed to the communication and tracking of Apollo missions to the Moon, although primary responsibility was held by the Manned Space Flight Network. The DSN designed the MSFN stations for lunar communication and provided a second antenna at each MSFN site (the MSFN sites were near the DSN sites for just this reason). Two antennas at each site were needed both for redundancy and because the beam widths of the large antennas needed were too small to encompass both the lunar orbiter and the lander at the same time. DSN also supplied some larger antennas as needed, in particular for television broadcasts from the Moon, and emergency communications such as Apollo 13.[5]

From a NASA report describing how the DSN and MSFN cooperated for Apollo:[6]

Another critical step in the evolution of the Apollo Network came in 1965 with the advent of the DSN Wing concept. Originally, the participation of DSN 26-m antennas during an Apollo Mission was to be limited to a backup role. This was one reason why the MSFN 26-m sites were collocated with the DSN sites at Goldstone, Madrid, and Canberra. However, the presence of two, well-separated spacecraft during lunar operations stimulated the rethinking of the tracking and communication problem. One thought was to add a dual S-band RF system to each of the three 26-m MSGN antennas, leaving the nearby DSN 26-m antennas still in a backup role. Calculations showed, though, that a 26-m antenna pattern centered on the landed Lunar Module would suffer a 9-to-12 db loss at the lunar horizon, making tracking and data acquisition of the orbiting Command Service Module difficult, perhaps impossible. It made sense to use both the MSFN and DSN antennas simultaneously during the all-important lunar operations. JPL was naturally reluctant to compromise the objectives of its many unmanned spacecraft by turning three of its DSN stations over to the MSFN for long periods. How could the goals of both Apollo and deep space exploration be achieved without building a third 26-m antenna at each of the three sites or undercutting planetary science missions?

The solution came in early 1965 at a meeting at NASA Headquarters, when Eberhardt Rechtin suggested what is now known as the "wing concept". The wing approach involves constructing a new section or "wing" to the main building at each of the three involved DSN sites. The wing would include a MSFN control room and the necessary interface equipment to accomplish the following:

With this arrangement, the DSN station could be quickly switched from a deep-space mission to Apollo and back again. GSFC personnel would operate the MSFN equipment completely independently of DSN personnel. Deep space missions would not be compromised nearly as much as if the entire station's equipment and personnel were turned over to Apollo for several weeks.

The details of this cooperation and operation are available in a two-volume technical report from JPL.[7] [8]

Each facility is situated in semi-mountainous, bowl-shaped terrain to help shield against radio frequency interference.[11] The strategic 120-degree placement permits constant observation of spacecraft as the Earth rotates, and helps to make the DSN the largest and most sensitive scientific telecommunications system in the world.

The antennas at all three DSN Complexes communicate directly with the Deep Space Operations Center (DSOC) located at the JPL facilities in Pasadena, California. DSOC personnel monitor and direct operations, and oversee the quality of spacecraft telemetry and navigation data delivered to network users. In addition to the DSN complexes and the operations center, a ground communications facility provides communications that link the three complexes to the operations center at JPL, to space flight control centers in the United States and overseas, and to scientists around the world.[12]

NASA's scientific investigation of the Solar System is being accomplished mainly through the use of unmanned spacecraft. The DSN provides the vital two-way communications link that guides and controls these machines, and brings back the images and new scientific information they collect. All DSN antennas are steerable, high-gain, parabolic reflector antennas.[11] The antennas and data delivery systems make it possible to:[13]

The network is a NASA facility and is managed and operated for NASA by JPL, which is part of the California Institute of Technology (Caltech). The Interplanetary Network Directorate (IND) manages the program within JPL and is charged with the development and operation of it. The IND is considered to be JPL's focal point for all matters relating to telecommunications, interplanetary navigation, information systems, information technology, computing, software engineering, and other relevant technologies. While the IND is best known for its duties relating to the Deep Space Network, the organization also maintains the JPL Advanced Multi-Mission Operations System (AMMOS) and JPL's Institutional Computing and Information Services (ICIS).[14][15]

ITT Systems is under a 5 year contract to JPL for the DSN Operations and Maintenance. ITT has responsibility for managing the Goldstone complex, operating the DSOC, and for DSN Operations, Mission Planning, Operations Engineering, and Logistics.[1] 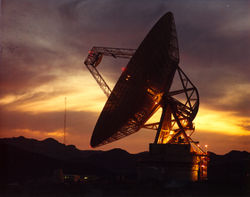 Each complex consists of at least four deep space terminals equipped with ultra-sensitive receiving systems and large parabolic-dish antennas. There are:

In order to meet the current and future needs of deep space communication services, a number of new Deep Space Station antennas needs to be built at the existing Deep Space Network sites. At the Canberra Deep Space Communication Complex the first of these antennas are currently under construction. The first of the new antennas will be coming online by 2014 to 2016.[2]

The general capabilities of the DSN have not substantially changed since the beginning of the Voyager Interstellar Mission in the early 1990s. However, many advancements in digital signal processing, arraying and error correction have been adopted by the DSN.

The ability to array several antennas was incorporated to improve the data returned from the Voyager 2 Neptune encounter, and extensively used for the Galileo spacecraft, when the high gain antenna did not deploy correctly.[16]

The DSN array currently available since the Galileo mission can link the 70-metre (230 ft) dish antenna at the Deep Space Network complex in Goldstone, California, with an identical antenna located in Australia, in addition to two 34-metre (112 ft) antennas at the Canberra complex. The California and Australia sites were used concurrently to pick up communications with Galileo.

All the stations are remotely operated from a centralized Signal Processing Center at each complex. These Centers house the electronic subsystems that point and control the antennas, receive and process the telemetry data, transmit commands, and generate the spacecraft navigation data. Once the data is processed at the complexes, it is transmitted to JPL for further processing and for distribution to science teams over a modern communications network. 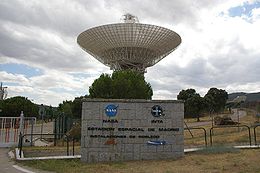 There are a number of limitations to the current DSN, and a number of challenges going forward.