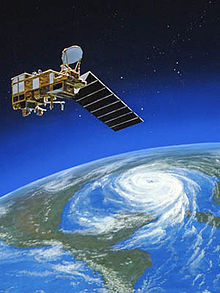 The National Polar-orbiting Operational Environmental Satellite System (NPOESS) was to be the United States' next-generation satellite system that would monitor the Earth's weather, atmosphere, oceans, land and near-space environment. NPOESS satellites were to host proven technologies and operational versions of sensors that are currently under operational-prototyping by NASA. The estimated launch date for the first NPOESS satellite, "C1" or "Charlie 1" was around 2013. Issues with sensor developments were the primary cited reason for delays and cost-overruns.

NPOESS was to be operated by the NOAA / NESDIS / NPOESS Program Executive Office Flight Operations at the NOAA Satellite Operations Facility (NSOF) in Suitland, MD. Northrop Grumman Aerospace Systems (NGAS) was the primary system integrator for the NPOESS project. Raytheon, Ball Aerospace & Technologies Corp. and Boeing are developing the sensors.

NPOESS was to be a replacement for both the United States Department of Defense's DMSP and the NOAA Polar Operational Environmental Satellites (POES) series.

The White House announced on February 1, 2010 that the NPOESS satellite partnership was to be dissolved, and that two separate lines of polar-orbiting satellites to serve military and civilian users would be pursued instead[1]: