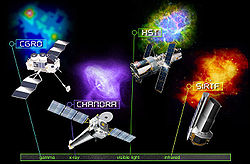 NASA's series of Great Observatories satellites are four large, powerful space-based telescopes. Each of the Great Observatories has had a similar size and cost at program outset, and each has made a substantial contribution to astronomy. The four missions each examined a region of the electromagnetic spectrum to which it was particularly suited.[1]

Of these satellites, only the Compton Gamma Ray Observatory is not currently operating; one of its gyroscopes failed, and NASA ordered it to be de-orbited on June 4, 2000. Parts that survived reentry splashed into the Pacific Ocean. Hubble was originally intended to be retrieved and returned to Earth by the Space Shuttle, but the retrieval plan was later abandoned. On October 31, 2006 NASA Administrator Michael D. Griffin gave the go-ahead for a final refurbishment mission. The 11-day STS-125 mission by Atlantis, launched on 11 May 2009,[2] installed fresh batteries, replaced all gyroscopes, and installed the Wide Field Camera 3 and the Cosmic Origins Spectrograph.[3]

Spitzer was the only one of the Great Observatories not launched by the Space Shuttle. It was originally intended to be so launched, but after the Challenger disaster, the Centaur LH2/LOX upper stage that would have been required to push it into a heliocentric orbit was banned from Shuttle use. Titan and Atlas rockets were canceled for cost reasons. After redesign and lightening, it was launched by a Delta II rocket instead.

History of the program

The history of the Hubble Space Telescope can be traced back as far as 1946, when the astronomer Lyman Spitzer wrote the paper Astronomical advantages of an extraterrestrial observatory.[4] Spitzer devoted much of his career to pushing for a space telescope to be developed.

The 1966-72 Orbiting Astronomical Observatory missions demonstrated the important role space-based observations could play in astronomy, and 1968 saw the development by NASA of firm plans for a space-based reflecting telescope with a mirror 3 m in diameter, known provisionally as the Large Orbiting Telescope or Large Space Telescope (LST), with a launch slated for 1979.[5] Congress eventually approved funding of US$36,000,000 for 1978, and the design of the LST began in earnest, aiming for a launch date of 1983. During the early 1980s, the telescope was named after Edwin Hubble.

Gamma rays had been examined above the atmosphere by several early space missions. During its High Energy Astronomy Observatory Program in 1977, NASA announced plans to build a "great observatory" for gamma-ray astronomy. The Gamma Ray Observatory (GRO), renamed Compton Gamma-Ray Observatory (CGRO), was designed to take advantage of the major advances in detector technology during the 1980s. Following 14 years of effort, the CGRO was launched on 5 April 1991.[6]

In 1976 the Chandra X-ray Observatory (called AXAF at the time) was proposed to NASA by Riccardo Giacconi and Harvey Tananbaum. Preliminary work began the following year at Marshall Space Flight Center (MSFC) and the Smithsonian Astrophysical Observatory (SAO). In the meantime, in 1978, NASA launched the first imaging X-ray telescope, Einstein (HEAO-2), into orbit. Work continued on the Chandra project through the 1980s and 1990s. In 1992, to reduce costs, the spacecraft was redesigned. Four of the twelve planned mirrors were eliminated, as were two of the six scientific instruments. Chandra's planned orbit was changed to an elliptical one, reaching one third of the way to the Moon's at its farthest point. This eliminated the possibility of improvement or repair by the space shuttle but put the observatory above the Earth's radiation belts for most of its orbit.

By the early 1970s, astronomers began to consider the possibility of placing an infrared telescope above the obscuring effects of Earth's atmosphere. Most of the early concepts, envisioned repeated flights aboard the NASA Space Shuttle. This approach was developed in an era when the Shuttle program was presumed to be capable of supporting weekly flights of up to 30 days duration. In 1979, a National Research Council of the National Academy of Sciences report, A Strategy for Space Astronomy and Astrophysics for the 1980s, identified a Shuttle Infrared Telescope Facility (SIRTF) as "one of two major astrophysics facilities [to be developed] for Spacelab," a Shuttle-borne platform.

The launch of the Infrared Astronomical Satellite, an Explorer-class satellite designed to conduct the first infrared survey of the sky led to anticipation of an instrument using new infrared detector technology. By September 1983 NASA was considering the "possibility of a long duration [free-flyer] SIRTF mission." The 1985 Spacelab-2 flight aboard STS-51-F confirmed the Shuttle environment was not well suited to an onboard infrared telescope, and a free-flying design was better. The first word of the name was changed from Shuttle so it would be called the Space Infrared Telescope Facility.[7][8]

The concept of a Great Observatory program was first proposed in the 1979 NRC report "A Strategy for Space Astronomy and Astrophysics for the 1980's." This report laid the essential groundwork for the Great Observatories and was chaired by Peter Meyer (through June 1977) and then by Harlan J. Smith (through publication). In the mid-1980s it was further advanced by all of the astrophysics Division Directors at NASA headquarters, including Frank Martin and Charlie Pellerin. NASA's "Great Observatories" program used four separate satellites, each designed to cover a different part of the spectrum in ways which terrestrial systems could not. This perspective enabled the proposed X-ray and InfraRed observatories to be appropriately seen as a continuation of the astronomical program begun with Hubble and CGRO rather than competitors or replacements.[1][9] 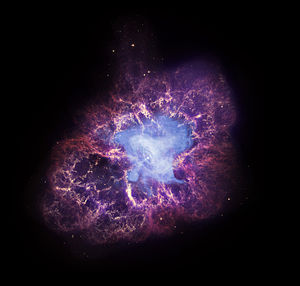 Each observatory was designed to push the state of technology in its intended wavelength region. As x-rays, gamma-rays and far-infrared radiation do not pass through the Earth's atmosphere, space missions were essential for the Compton, Chandra and Spitzer observatories.

Compton observed in gamma rays, which do not penetrate the lower atmosphere. It was much larger than any gamma-ray instruments flown on the previous HEAO missions, opening entirely new areas of observation. It had four instruments covering the 20 keV to 30 GeV energy range, which complemented each other's sensitivities, resolutions, and fields of view. Gamma rays are emitted by various high-energy and high-temperature sources, such as black holes, pulsars, and supernovae.

Spitzer also observes at wavelength largely inaccessible to ground telescopes. It was preceded in space by NASA's smaller IRAS mission and ESA's large ISO telescope. Spitzer's instruments took advantage of the rapid advances in infrared detector technology since IRAS, combined with its large aperture, favorable fields of view, and long life. Science returns have been accordingly outstanding. Infrared observations are necessary for very distant astronomical objects where all the visible light is redshifted to infrared wavelengths, for cool objects which emit little visible light, and for regions optically obscured by dust.

All four telescopes have had a substantial impact on astronomy. The opening up of new wavebands to high resolution, high sensitivity observations by the Compton, Chandra and Spitzer has revolutionized our understanding of a wide range of astronomical objects, and has led to the detection of thousands of new, interesting objects. Hubble has had a much larger public and media impact than the other telescopes, although at optical wavelengths Hubble has provided a more modest improvement in sensitivity and resolution over existing instruments. Hubble's capability for uniform high-quality imaging of any astronomical object at any time has allowed accurate surveys and comparisons of large numbers of astronomical objects. The Hubble Deep Field observations have been very important for studies of distant galaxies, as they provide rest-frame ultraviolet images of these objects with a similar number of pixels across the galaxies as previous ultraviolet images of closer galaxies, allowing direct comparison. The James Webb Space Telescope will provide an even greater step forward, providing rest-frame visible light images of even more distant galaxies which can be directly compared with images of nearby galaxies at visible light wavelengths.

Aside from inherent mission capabilities (particularly sensitivities, which cannot be replicated by ground observatories), the Great Observatories program allows missions to interact for greater science return. Different objects shine in different wavelengths, but training two or more observatories on an object allows a deeper understanding.

High-energy studies (in x-rays and gamma rays) have had only moderate imaging resolutions so far. Studying x-ray and gamma-ray objects with Hubble, as well as Chandra and Compton, gives accurate size and positional data. In particular, Hubble's resolution can often discern whether the target is a standalone object, or part of a parent galaxy, and if a bright object is in the nucleus, arms, or halo of a spiral galaxy. Similarly, the smaller aperture of Spitzer means that Hubble can add finer spatial information to a Spitzer image.

Ultraviolet studies with Hubble also reveal the temporal states of high-energy objects. X-rays and gamma rays are harder to detect with current technologies than visible and ultraviolet. Therefore, Chandra and Compton needed long integration times to gather enough photons. However, objects which shine in x-rays and gamma rays can be small, and can vary on timescales of minutes or seconds. Such objects then call for followup with Hubble or the Rossi X-ray Timing Explorer, which can measure details in angular seconds or fractions of a second, due to different designs.

The ability of Spitzer to see through dust and thick gases is good for galactic nuclei observations. Massive objects at the hearts of galaxies shine in x-rays, gamma rays, and radio waves, but infrared studies into these clouded regions can reveal the number and positions of objects.

Hubble, meanwhile, has neither the field of view nor the available time to study all interesting objects. Worthwhile targets are often found with ground telescopes, which are cheaper, or with smaller space observatories, which are sometimes expressly designed to cover large areas of the sky. Also, the other three Great Observatories have found interesting new objects, which merit diversion of Hubble.

One example of observatory synergy is solar system and asteroid studies. Small bodies, such as small moons and asteroids, are too small and/or distant to be directly resolved even by Hubble; their image appears as a diffraction pattern determined by brightness, not size. However, the minimum size can be deduced by Hubble through knowledge of the body's albedo. The maximum size can be determined by Spitzer through knowledge of the body's temperature, which is largely known from its orbit. Thus, the body's true size is bracketed. Further spectroscopy by Spitzer can determine the chemical composition of the object's surface, which limits its possible albedos, and therefore sharpens the low size estimate.

At the opposite end of the cosmic distance ladder, observations made with Hubble, Spitzer and Chandra have been combined in the Great Observatories Origins Deep Survey to yield a multi-wavelength picture of galaxy formation and evolution in the early Universe.

Note that none of these missions are designed for Shuttle launch, or manned servicing. Most are in orbits beyond the Shuttle's capability, to allow new observing modes.