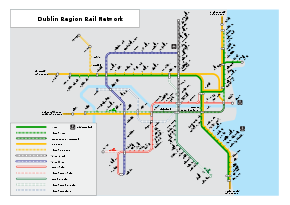 The Dublin Suburban Rail (Irish: Iarnród Bruachbhailteach Baile Átha Cliath) network, (now branded DART/Commuter), is a railway network that serves the city of Dublin, Ireland, most of the Greater Dublin Area and outlying towns. The system is made up of five lines:

Services run from 05:30 to 00:42 from Monday to Saturday and 08:25 to 00:42 on Sunday. However, frequency varies by line, with the DART service being more frequent (every 15 minutes off peak, every few minutes peak) and services to outer stations being less frequent (maybe one every hour off peak). Less trains run on Sunday than any other day, and special timetables may be made for public holidays. There are no services on Christmas Day.

As of 2006, the majority of rolling stock used on the non-DART services are IE 2900 Class diesel multiple units, with IE 2600 Class, IE 2700 Class, and IE 2800 Class DMUs also in use for some services. The Class 2900 DMUs are fitted with interior LEDs and automated information systems. CIE 8100 Class electric multiple units form the backbone of the DART services, with IE 8200 Class and IE 8500 Class (and its variations) also in use. Locomotive hauled services are no longer generally used on DART/Commuter services, although these (typically British Railways Mark 1 trains, the "Cravens") were a feature before the delivery of the Class 2800 DMUs in the early 2000s. Currently Commuter services are operated by 2600, 2700, 2800, 29000 and 22000 class (note services on Kildare commuter are now operated by 22000 class intercity railcars)

Dunleer and/or Dundalk South have been mooted as possible additional stations. The track is shared with the Dublin-Belfast Enterprise service, and DART services as far as Malahide. The bridge at Drogheda is single track which may hinder high frequency services in the long term. The halt at Mosney is no longer used due to the closure of the holiday camp there.

The services share track with the mainline service to Rosslare and the DART service as far as Greystones. The line is single track from Bray onwards. This is the least frequent DART/Commuter service, with only a handful of trains daily.

This service is the newest Dublin DART/Commuter line. It was launched in 1994 as the Arrow service, shortly after the delivery of the then Arrow-branded Class 2600 railcars. Cherry Orchard, Clondalkin, Hazelhatch and Celbridge and Sallins and Naas stations were opened on the same day, although stations had previously existed on some of these sites. Newbridge station had previously been an InterCity station, though Commuter trains now mainly serve it. The stations on the line were at the time of launch all "Arrow" branded also, though this branding has now been removed. This line does not connect directly with the rest of the network,[citation needed] being operated out of Dublin Heuston, however it is connected by the Luas and Dublin Bus Route 90.

A station used only occasionally for "special" trains also exists at the Curragh. The station at Cherry Orchard was relocated to Cherry Orchard & Parkwest in July 2008 and Clondalkin was located further west as Clondalkin & Fonthill on the Fonthill Road in October 2008. This work is part of the Kildare Route Project, which includes quadruple-tracking the line between Le Fanu Road (east of the present Cherry Orchard station) to just beyond Hazelhatch. There will also be another new station built between Adamstown and Clondalkin at Kishoge, which will be located adjacent to the Lucan Outer Ring Road.

A special development zone (SDZ) called Adamstown is currently under construction. This borders an area from west Lucan to the Kildare rail line and is approx. 16 km from Dublin. It is expected to have 20,000 inhabitants by the time it is completed. A new station opened on 10 April 2007, built and paid for by the developers.

This service had been operated as a limited service from November 1981 until 1990, serving Ashtown (opened January 1982), Clonsilla, Leixlip (now Leixlip Louisa Bridge) and Maynooth. In 1990, new stations were opened at Broombridge, Castleknock, Coolmine and Leixlip Confey. Another station at Drumcondra was re-opened in March 1998. Most of the station buildings on this line were a mixture of small block built booking offices and converted steel cabins and there was still a limited service owing to the single track between Clonsilla and Maynooth. In 2001 a major upgrade project took place, with the upgrading of the line between Clonsilla and Maynooth to double track, the entire line being upgraded to continuous welded rail, the building of permanent station buildings at all stations except Broombridge, the replacement of the semaphore signalling with computerised traffic control, and the provision of real time information displays at stations (these have however, apart from at Drumcondra and Phoenix Park station, never been activated).

Since 12 March 2007, several additional weekday services operate on the Maynooth line. However these only operate from Clonsilla, serving the existing stations to Broombridge, and then terminate at the new Docklands railway station. They do not serve either Drumcondra or the central Dublin stations, or the stations beyond Clonsilla. It is planned that these services will run on the proposed branch to Littlepace, and eventually Navan, becoming the proposed Meath Commuter service.[1][2]

On 21 January 2008, Phoenix Park railway station opened. This station is located beside the N3 road in Ashtown, and despite its name is not located in the Phoenix Park, but has rather been built to serve the Phoenix Park Racecourse Apartments constructed on grounds of the former racecourse adjacent to the park.