Dublin Pearse, also known (and referred to on all station signage) as Pearse Station (Irish: Stáisiún na bPiarsach), located on Westland Row in the Southside in Dublin, Ireland, is Ireland's busiest railway station[citation needed] and an important commuter terminus for the Dublin area.

The station has two through platforms (Nos. 1 & 2). Until 2007, one terminal platform (No. 3) was occasionally used for special services. A fourth platform also existed, but was unsuitable for modern passenger services and was used as a siding. This platform (and Platform 5, which had been closed for some years and later converted into a car park) has been used as a set for several movies, including Michael Collins, Angela's Ashes, Nora and the 2005 remake Lassie. In summer 2008, Platform 3 was filled in as part of the station's partial renovation while the disused Platform 4 was shortened.

The station also has a café on the southbound platform. This was closed during autumn 2006, although it reopened (as SoBo Café) in February 2007. However, a Spar convenience store, which had been operational in the station for many years, closed in February 2008.

There are public lavatories at the station. 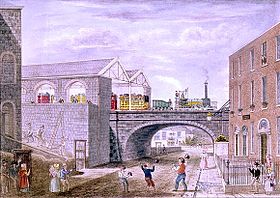 The station opened on 17 December 1834 as Westland Row Station,[1] the city terminus of the Dublin & Kingstown Railway which was the first 'commuter' line in the world. The station was extensively rebuilt for the opening of the City of Dublin Junction Railway in 1891. During this process, the station was converted from a terminus into a through station, although it retained three terminus platforms.

The station was renamed in 1966 (after the Pearse Family, notably brothers Patrick and Willie) as part of the Easter Rising celebrations that saw many Irish railway stations renamed. Because of its proximity to Pearse St., many Dubliners refer to the station as "Pearse Street Station" – in December 2004, Iarnród Éireann even posted a list of station departures headed with that name – though that is not its official name. Although a number of Intercity lines operated out of the station in the past (including, until the mid-1970s, the Dublin–Galway railway line), no Intercity services now regularly terminate at the station, though it is still served by Rosslare InterCity services.

The station was temporarily closed on 11 March 2008 due to roof damage, though it reopened the next day.

The Transport 21 initiative plans an Interconnector tunnel connecting Heuston Station with Pearse Station and onwards to the northern DART network via the new Docklands railway station in Spencer Dock to be open by 2015. As part of this project, an underground station with two additional platforms will be constructed beneath the present station. Until recently Pearse Station was the only one of Dublin's four terminal stations which has not or is not the subject of a recent major upgrade project, the others being Connolly, Heuston on the west of the city and Tara Street Station. This major renovation commenced in 2007 as part of the Interconnector project, with publicity erected in the station for this in March 2008. As part of phase 1 of this project, new automatic exit ticket validation machines were installed on both platforms 1 and 2.

There are also plans to build a new southbound entrance, to be fully operational before DART underground opens, towards the direction of Ringsend.