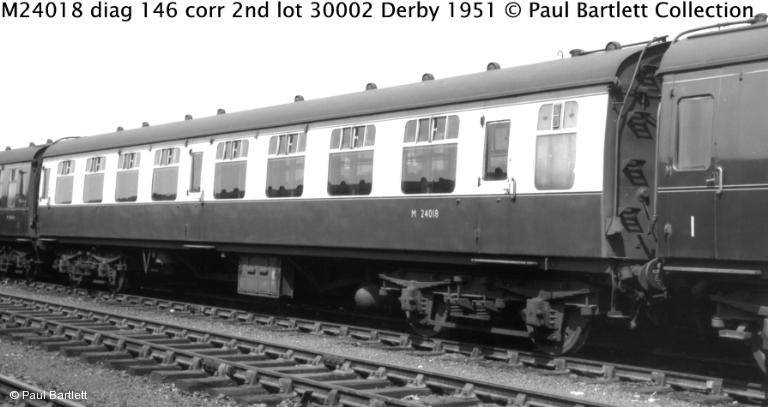 imagesize = 300px
background = #0033cc
caption = Corridor Third (TK) M24018 at Derby, 1951
Manufacturer =
Operator =
Formation =
Built =
LinesServed =
InService = 1951-
CarLength =
CarWidth =
CarHeight =
Weight =
Capacity =
MaxSpeed =
Gauge =
Traction =
Engine = |
's first design of carriages were given the designation Mark 1. Following nationalisation in 1948, BR had continued to build carriages to the designs of the "Big Four" companies (the Great Western, Southern, London Midland and Scottish and London and North Eastern railways), and the Mark 1 was intended to be the standard carriage design for use across all lines, incorporating the best features of each of the former companies' designs. It was also designed to be much stronger than previous designs, to provide better protection for passengers in the event of an accident.

These were constructed in two lengths, 63 ft 6 in (approximately 19.5 m) with s at 46 ft 6 in centres, and 57 ft with bogies at 41 ft centres. The shorter vehicles were intended for use where the track curvature was too tight to accommodate the longer vehicles, due to excessive overhang.

These lengths allowed for compartments or seating bays 6 ft 3 in (1.93 m) wide, plus space for toilets and entrance vestibules; a typical design of Mark 1 vehicle, the TO (Open Third class), had eight seating bays, three entrance vestibules and a pair of toilets at one end. This provided reasonable space. Care was taken to ensure that passengers could enjoy an unobstructed view out of the train from all seats. Seats were aligned to windows and on the long-distance design of Mark 1, the windows had a low sill, just 25 inches above the floor.

An unusual feature of the design was the bodyside curvature, of 28 ft radius and just noticeable; the windows had flat glass and consequently the upper quarter was separate and in a different plane from the lower glazing, with an intervening transom, and the steel panels were recessed on either side of each window opening to accommodate the difference between the flat glass and the curved sides. The opening portion of the windows were provided with sliding ventilators, with an external aerofoil for draught-free ventilation, the correct opening position being marked by a pair of arrows. Doors were provided with frameless droplights manufactured by Beclawat; these were supported by a spring-loaded lazytongs mechanism inside the lower part of the door, and the top of the window had a sprung metal clip enaging in slots on either side of the window opening.

The original vehicles had timber veneer interior finishes, and on the main line vehicles small plastic labels were fixed to the panels, giving the type of wood and its country of origin eg "Crown Elm Great Britain"; "Lacewood Great Britain", etc. In 1955, an order was placed for 14 vehicles, with manufacturers being invited to incorporate innovative features; perhaps the most striking of these prototypes, which were completed in 1957, were those constructed by Cravens. Following evaluation, and with the increasing influence of the British Transport Design Panel, mark 1 vehicles built from the later 1950s onwards were to modified designs. Laminates were used instead of timber panelling, and in the very last of the mark 1 hauled vehicles, fluorescent lighting was fitted instead of tungsten bulbs.An important variant on the mark 1 design were the 44 Pullman vehicles built by Metropolitan-Cammell in 1960. A further change introduced in the late 1950s was the use of aluminium window frames instead of direct glazing into the steel panelling.

The underframes consisted of a heavy assembly of steel sections, with angle used to form bracing trusses. These were placed close to the centre line of the vehicle rather than beneath the solebars, as was characteristic of previous vehicles. The original bogies were a double bolster type, designated B1. These proved unsatisfactory and a new cast-steel design was introduced from 1958 (often referred to as the Commonwealth type). Later on, many vehicles were fitted with the B4 bogie, and a comfortable ride could then be relied on, as was evident in the later EMU vehicles.

An important factor was the compressive coupling, which provided excellent inter-vehicular damping through the gangway end-plates, which quickly became highly polished, indicating that they were performing this task.

At the end of the production of hauled Mark 1 stock came a series of experimental carriages known as the XP64 train. Externally they resembled Mark 1 stock with the addition of a cosmetic cover over the solebars of the standard Mark 1 underframes, but inside they included many new features, including pressure ventilation, new seating designs and wider bi-fold doors. Many of these features were later incorporated in the Mark 2 stock produced from 1964.

The steady building of Mark 1 stock to replace earlier vehicles was praised by the Chief Inspecting Officer of Railways, Lt Col I.K.A. McNaughton (Chief Inspecting Officer of Railways, Dept of Transport), in the Sir Seymour Biscoe Tritton lecture to the Institute of Mechanical Engineers in 1977. Speaking of the fall in fatalities since 1955, he put forward his opinion that a major factor in this improvement was "the introduction in 1951 of the BR standard Mark 1 passenger coach, which, over a period of about ten years, replaced pre-war designed rolling stock on most principal routes. The damage-resistant qualities of this all-steel coach, mounted on a 200 ton end-load resistant underframe and fitted with buckeye couplings, have been evidenced time and time again. Only in a small number of very destructive accidents has serious body damage of the kind that inevitably leads to fatal accidents been observed and there have been several remarkable instances of high-speed derailments in which no personal injuries have occurred."

However, after the 1988 Clapham Junction rail accident, the Mark 1 design was criticised as it was no longer the best design for passenger protection, the Mark 3 design having excelled over it in this respect. In accidents like Clapham, where two units collided in line with each other, the Mark 1 design was prone to having the body superstructure shear away from the underframe, thereby crushing the passenger accommodation. The result of this criticism was pressure from the rail safety inspectorate to end the use of Mark 1 stock on the main line and, in the meantime, use special equipment to minimise the problem. Whilst not involving mark 1 vehicles, the Cannon Street accident also showed the tendency of a vehicle with a heavy separate underframe to "ride up" onto the vehicle it had collided with and cause further damage.

The equipment that was developed was called Cup and Cone, and while it was helpful, it was agreed that fitment to all stock would be too expensive in comparison with the safety benefits, when the stock was due to have only a short life and with improvements in signalling technology, notably the Train Protection and Warning System, having reduced the likelihood of accidents where it would be most effective. As a result, Cup and Cone was never put into everyday use.

Withdrawal of the Mark 1 units was not practical in 1988; the youngest units were only 14 years old, just short of halfway through a train's expected life of 30 years. In addition, was still using multiple units with underframes that had been constructed before , and these had priority for replacement.

When privatisation took place, after 1994, only was given an extended franchise (15 years) in return for ordering new trains. and , the other major users of Mark 1 multiple units by that time, were not expected to order new trains. As a result, in 2000, Mark 1 units were still in use across most of the former Southern Region with no new trains having been ordered.

A similar story took place in , with the last of ScotRail's venerable Mark 1 based Class 303 multiple units surviving until the end of 2002, when Class 334 replaced them on all Glasgow commuter lines.

The use of Mark 1 stock on postal trains was curtailed when the decided to cease the use of rail to transport mail traffic. Thus, the problem of how to replace the large numbers of Mark 1 carriages on these services was answered. However, in 2005, resumed some mail services.

and its associated infrastructure companies continue to use converted Mark 1 coaches for various departmental duties - test trains, units, and accommodation units for worksite personnel are some examples. A small number of railtour companies have waivers to operate Mark 1 coaching stock on certain railtour duties. The conditions usually involve the fitting of central door locking and having either a non-passenger or non Mark 1 coach at the ends of the train.

The final withdrawal of Mark 1s from daily mainline use took place in 2005 (except for two three-car EMUs on the Lymington branch and a railcar on the Princes Risborough to Aylesbury branch) some 54 years since the design entered service. Mark 1s continue to be used on special charter trains, but this use is also likely to be much reduced as Mark 3 coaches released from service by Virgin West Coast become available to replace them. This will leave the Lymington and Aylesbury branches and preserved railways as the only places to ride on Mark 1 stock. However, another railcar (in both cases a Class 121) has subsequently entered service on the Cardiff Bay branch, leaving eight Mk 1-style vehicles in service around the network. All are used on short single-track branch lines where no other trains operate, minimising the risk of collisions. The units on the Lymington line do occasionally get replaced with Desiros however and full replacement may take place soon. The Aylesbury unit is also occasionally replaced with a Turbo set. The Cardiff Bay unit is expected to remain in service for the foreseeable future, and it may become the last Mk 1 vehicle in commercial service in the UK.

Due to the lack of central door locking and the structural inadequacies of Mark 1 stock at high speeds various rules now (as of 2006) govern their usage. In particular vehicles lacking central door locking require a steward to be present in each vehicle. Train companies are also recommended to run Mark I stock with more robust non-Mark I stock at either end to act as a barrier in the case of collisions.

British Rail Mark I coaches have been painted in a wide range of liveries. On introduction in 1951 the carriages were painted crimson (actually carmine) and cream ("blood and custard") for corridor stock and carmine for non-corridor stock. 1956 saw the first big changes, with the end of 'third class' and the return of regional colour schemes. The Western Region promptly adopted GWR chocolate and cream livery, and Southern Region reverted to green. The other regions adopted maroon. 1960 saw Southern Region adopt the now familiar yellow cantrail above first class and red above dining cars. By 1963 this was found on all carriages. In 1962 the Western Region abandoned the use of chocolate and cream.

With the introduction of spray painting in 1964, the coach ends became the same colour as the bodywork. A year later the ubiquitous British Rail blue and grey was introduced with the , and by 1968 most non-suburban Mark I stock was blue and grey; however it it wasn't until 1974 that the last maroon MK1 was repainted into blue and grey livery. The use of blue and grey continued until 1982 when the first experiments in new liveries occurred. During the BR blue period other changes took place - notably the last 'Ladies Only' compartments vanished in 1977.

1982 saw a proliferation of new liveries, including yellow and grey for stock that was requisitioned for engineering and maintenance work. 1985 the reappearance of some carriages in chocolate and cream for the GWR 150th anniversary celebrations, along with a brief Scottish experiment in green and cream. Then around 1988 reclassification of 'second class' as 'standard class' took place.

1983 was the year that the well-known InterCity livery was first seen, 1986 the introduction of Network South East and the end of the Searail livery, 1988 saw the first Regional Railways livery (as well as postal trains and parcels trains turning red), and from 1995/6 private operators began to paint their stock their own colours.