The British Rail Class 165 Turbo is a fleet of suburban diesel multiple units (DMUs), originally specified by and built for British Rail, the then United Kingdom state owned railway operator. They were built by BREL at York Works between 1990 and 1992.[3] The trains belong to the Networker family of trains, and were originally known as Networker Turbos to distinguish them from the electrically propelled members of that family. An express version was subsequently built in the form of the Class 166 Turbo Express trains.

Two batches of units were built for different subdivisions of Network SouthEast to replace elderly "Heritage" DMUs as well as locomotive-hauled trains on services out of London Paddington and London Marylebone. The fleet is wide-bodied to take advantage of the gauges of the former Great Western Railway and Great Central Railway on whose lines it runs. As a result, it is restricted to these routes.[citation needed]

Both have a 350 horsepower (261 kW) Perkins 2006-TWH diesel engine on each car, Voith Turbo-transmissions, and Gmeinder final drive.

When new, the units were branded as either Chiltern Turbo or Thames Turbo between the two first class windows of the DMCL carriage.

Class 165 units were some of the first trains in Britain to be designed for Driver Only Operation, in cases were a Guard is required they must carry out their door operation duties via a bell system to signal the Drivers to close doors and start the train. This requires the Guard to return to a vacant cab at each station to carry out these duties, examples of this include Chiltern Railways services north of Banbury or First Great Western services on the Cotswolds Line.

Thirty-nine Class 165/0 Turbo trains were built in 1990-91 for the Chiltern subdivision of Network SouthEast, numbered 165001-039. Both 2-car and 3-car variants were built. Units 165001-028 were delivered as 2-car units, and were followed by eleven 3-car units numbered 165029-039. These vehicles have a top speed of 75 mph (121 km/h). They are fitted with tripcocks for working over the London Underground lines between Amersham and Harrow-on-the-Hill. Automatic Train Protection is also fitted, making them one of the few classes to have this feature in Britain.

165029-039 were temporarily allocated to the Thames line in 1992. This was necessary as resignalling of Paddington station meant that Network SouthEast could no longer run locomotive-hauled trains to and from Paddington. Insufficient numbers of Class 165/1 Turbo trains had been delivered by this date to operate all the locomotive-hauled services, so all the 3-car Class 165/0 Turbo trains were diverted to the Thames line as replacements. Once sufficient Class 165/1 Turbo trains had been delivered, 165029-039 were returned to the Chiltern line.

Each unit was formed of two outer driving motors, with an additional intermediate motor in the 3-car units. The technical description of the formation is DMSL+MS+DMS. Individual carriages are numbered as follows [1]:

No.165119 at Didcot Parkway. This unit is painted in the original Network SouthEast livery.

Each unit was formed of two outer driving motors, with an additional intermediate motor in the 3-car units. The technical description of the formation is DMCL+MS+DMS. Individual carriages are numbered as follows:[1]

Two coaches of no. 165115 were destroyed in the Ladbroke Grove rail crash. The remaining driving motor carriage remains as a spare vehicle.[4][5] 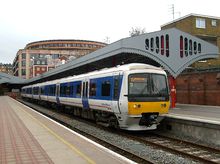 The 165/0 units were originally delivered in Network SouthEast livery for used on routes including fast services from London Marylebone to Princes Risborough, Banbury, Leamington Spa, Solihull and Birmingham Snow Hill, and local services from Aylesbury to London and Princes Risborough. In this role they replaced the Class 115 DMUs

Chiltern Railways inherited 34 Class 165/0 units from Network SouthEast, and the remaining five others were transferred from Thames Trains in 2004 - leaving Chiltern Railways operating the whole subclass.

After privatisation they continued to work similar services as before, but with the arrival of the faster Class 168 Clubman units the 165 Turbo trains have been pushed down the pecking order, are found less often on expresses to Birmingham, instead generally working on shorter routes, such as stopping services to Aylesbury, High Wycombe, and Stratford-upon-Avon and also the Birmingham Moor Street - Leamington Spa short services.

A new depot built at Aylesbury for the maintenance for these trains has been enlarged since its inception during British Rail days. Light maintenance and refuelling is carried out at Wembley LMD and Tyseley Depot and can occasionally be found at Stourbridge LMD. Units are also regularly stabled at Marylebone and Banbury.

All Chiltern units were refurbished between late 2003 and early 2005.[3] Air conditioning was added and the opening hopper windows replaced with sealed units. A new passenger information system similar to that on the Class 168 Clubman trains, CCTV cameras, and an area designated for the use of wheelchair-users were added, and the first-class section was removed as Chiltern became a standard-class only railway in 2003. The original 3+2 seating at the outer ends of the driving vehicles was replaced by new 2+2 seating. 3+2 seating was retained in the centre areas of the driving vehicles and throughout the centre vehicles of the three-car units. A cycle/wheelchair area with tip up seats was also added to each unit.

The Class 165/1 Fleet were built for services from London Paddington along the Great Western Main Line - known as the 'Thames line'; their main destinations included local trains to Reading, Greenford, Newbury, Bedwyn, Oxford, Hereford, Banbury and Bicester, and services along the branch lines to Windsor & Eton, Henley-on-Thames, Marlow and Greenford.

Following privatisation of British Rail, the franchise was won by the Go-Ahead Group who operated it as Thames Trains from 1996 to 2004 and inheriting the all the Class 165/1 Turbo trains as well as the first five Class 165/0 Turbo trains produced. As part of the franchise change they introduced a new blue, white and green livery. There were two variants of this livery; the Class 165 Turbo carried the non-express variant.

In 2004, due to deliveries of new Class 180 Adelante units on sister company First Great Western, the five Class 165/0 Turbo units became redundant and were transferred to Chiltern Railways.

During 2007, the Class 165/1 Turbo trains were re-liveried with the First Great Western Neon Dynamic Lines livery.

A rail user's group has suggested that Class 165 Turbo and the express variant, Class 166 Turbo Express will work services on the Cardiff Central to Portsmouth Harbour route after the Thameslink cascade, subject to line clearance.[6] However, a Network Rail document released in 2011 cast doubts on whether this would actually happen after revealing the gauge between Cardiff and Portsmouth is currently not suitable for Class 166s. [7]

Towards the end of January 2010, First Great Western have announced an £8,000,000 refresh programme to their fleet of Classes 165 and 166 Turbo DMU trains.[8] The seats will be retrimmed, interiors repainted, Passenger Information Displays replaced with a GPS based system and toilets upgraded. The refresh work is being carried out in house at Reading Depot, with the first two vehicles already arrived (165109[9]) and five vehicles will be in the works at any one time. The refresh will be completed by the end of March 2012, by which time 151 vehicles will have received the refresh work.