The British Rail Class 142 is a class of Pacer diesel multiple units used in the United Kingdom. 96 units were built by BREL in Derby between 1985 and 1987. They were a development of the earlier Class 141 which were introduced in 1984.

They were initially built for use on rural branch lines. However, as of September 2011 they are mainly used on busy commuter routes in the major cities in the north of England, with some also in use on local services around Cardiff and on Devon branch lines.

Under the Disability Discrimination Act drawn up in the mid 1990s, all public transport will need to be accessible by 2019. Pacers are unable to meet this requirement so will have to be withdrawn by the end of 2019. [5]

The train body is based on that of the original designs of Thomas Kenneth Cullum and the Leyland National bus, many fixtures and fittings of the bus can be found on the trains.[6][7] Each train has a seating capacity of any number between 102[2] and 121 passengers per twin-car set. In theory there should be 106 or 121 seats per unit.[8] However, many units have had seats removed to provide additional space for wheelchair access.[citation needed] The same engines and mechanical transmissions were used as on Class 141, as well as the double-folding external doors.

Excessive flange squeal on tight curves has been a problem on many routes operated by 142s,[9] caused by the long wheelbase and lack of bogies. The rough ride which can result has led to the units being nicknamed (along with the related Class 143s) Nodding Donkeys. The 142s were officially known as "Skippers" when they were briefly allocated to Cornwall in the mid-1980s. They were transferred elsewhere when they proved to be unsuitable for the sharply curved branch lines there.

The class was upgraded in the early 1990s. This was after a number of problems were experienced with the mechanical transmission and engines (including complete seizures), and now all units carry a more powerful engine - 230 bhp per car which equals 460 bhp (340 kW) per twin car unit - and Voith two stage hydraulic transmission, starting with a torque converter which switches to fluid coupling drive once the unit is up to 45 miles per hour (72 km/h). This has proven very successful, although incidents have occurred. In 2002 a North Western Trains unit derailed on the Carlisle to Whitehaven line when its engine fell off the chassis[citation needed], and then a similar incident occurred when a Northern Rail unit derailed while on route from Blackpool to Liverpool in June 2009.[10]

Detail modification is the replacing of the unreliable double folding doors with standard rigid folding examples used on Class 143 and 144 Pacers. The trains have also had new fire extinguisher equipment fitted, and more importantly, the replacement of the cable worked brakes by direct acting brakes. Fifteen Valley Lines operated Pacers have been refurbished. This included an external relivery into the Valley Lines colours of red, white lime green and green. The doors were painted in lime green due to requirements by the 1998 Disability Discrimination Act.

The interior refurbishment included the following:

From new, some units were painted according to the region they operated in. For example, the first 14 Greater Manchester PTE-sponsored units (142001-014) received GMPTE Orange, then the next 13 WestCountry-based units (142015-027) were painted in a GWR-inspired chocolate and cream livery and marketed as 'Skippers'.[11]. The remaining 69 units (142028-096), initially working across Lancashire / Greater Manchester, Merseyside and Yorkshire, received Provincial railbus two-tone blue livery.

Unit 142050 was the first Pacer to be fitted with Voith hydraulic transmission - initially on an experimental basis - to see if this configuration would be more reliable than the SCG mechanical gearboxes had been. In early Summer 1988, it was sent to Heaton depot (Newcastle) to work alongside the similarly troubled Class 143s, on what were considered arduous routes. The trial was considered enough of a success for all Pacers to be so converted in due course.

Owing to problems with excessive wheel wear on the sharp curves of the Cornish branches, the units from the West Country (142015-027) were moved north from late Summer 1988 - seven to Heaton depot (Newcastle) and six to Newton Heath depot (Manchester), to help alleviate DMU shortages in those regions. By the mid-1990s, the six former West Country units which had initially gone to Newton Heath were also transferred to Heaton, most / all still wearing their original chocolate and cream livery.

In 1989, Heaton depot implemented a planned Pacer renumbering scheme - which was to cover all Classes 142-144 - in which Class 142s would be renumbered 1422XX (SCG mechanical gearboxes) and 1425XX (Voith hydraulic transmission), thus, their units carried numbers 142516, 142518, 142519, 142520, 142521, 142522 and 142525, and all of their Class 143s were renumbered. However, the other two depots with Pacers, Newton Heath and Neville Hill (Leeds), never implemented this scheme. 142050 was not renumbered 142550, even though it remained allocated to Heaton throughout this time, probably because it was (still) considered to be 'on loan' from one of the other depots for the purpose of the trial. Subsequently, most of the Heaton units received a modified version of Tyne & Wear PTE yellow+white livery from 1992 (after the class 143s originally carrying this livery had transferred to Cardiff), and the opportunity was taken to renumber all back to 1420XX, in line with the rest of the class at the other depots.

Towards the end of the British Rail period, apart from T&WPTE livery mentioned above, other units began to be out-shopped in a revised GMPTE scheme, MerseyRail yellow+white, or standard Regional Railways livery. 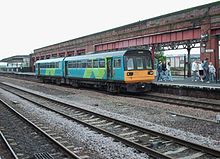 Upon the Privatisation of British Rail, the Class 142 Fleet was divided between North Western Trains in the North West and Northern Spirit in the North East.

Northern Spirit started its operations in 1997 and continued until 2000. At this point, Parent company MTL ran into difficulties and the company was sold to Arriva, who renamed it as Arriva Trains Northern.

In 2004 First North Western and Arriva Trains Northern were merged into the Northern Rail franchise, which inherited the combined fleet of 68 Class 142s.

Due to rising passenger numbers in the north of England (by about 10% per annum and even by over 25% per annum at some stations where 142s are in operation)[7] some have been replaced by Sprinter trains[12] and there are plans to replace more 142s.

Five 142s in service with First Great Western were returned to Northern Rail in December 2008, a further two have been released from the Oldham Loop on 3 October 2009, when the track closed for the Manchester Metrolink to start the conversion of the line to light rail. This means Northern has seven extra 142s to use on other services.

Despite being built for branch line stopping services, Class 142s are mainly used urban commuter services in and out of cities like Liverpool, Manchester, Sheffield, Leeds and Newcastle and can be seen on longer distance services of up to three hours including the 0656 Middlesbrough-Carlisle service (nearly 110 miles) and had been used on services between Blackpool North to Chester via Stockport, which ceased to operate in December 2008.

Northern had wished to dispense with Pacers altogether by 2011. However, it now looks unlikely that they will be dispensed of before the end of the Northern franchise in 2014.

A number of trains were refurbished for use on the Merseyside PTE City Lines around Liverpool which included dot-matrix route indicators, a new design of seating and Merseyrail paintwork. All these sets are now with Northern Rail and are in their livery. 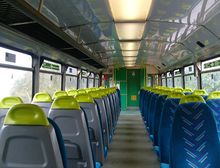 The interior of a refreshed Arriva Trains Wales Class 142 Pacer

Class 142 units are primarily used on South Wales Valley line routes and routes through the Vale of Glamorgan. The Wales and Borders franchise does not specify the introduction of new rolling stock and Class 142s are likely to be in service until at least 2018. On Valley and Vale of Glamorgan services Class 142s are often coupled together with Class 143 or Class 150 units to cope with demand on the busy Valley Lines network. The Class 142s have received a minor refurbishment with retrimmed seats in new moquette and the installation of ceiling mounted CCTV cameras.

Twelve Class 142 Pacers were received by First Great Western in 2007, and started operations in December 2007. These were loaned from Northern (where they had been stored), in part to cover for refurbishment of FGW's Sprinter fleets but also to allow the Class 158s to be reformed as three coach sets.

The 142s work alongside the similar Class 143s. The units have been used on the 'Devon Metro' services:

Maintenance is carried out at Exeter TMD.

There have been a number of accidents involving Class 142 Pacer trains since their introduction, the most serious of which happened at Winsford in 1999. The driver of a First North Western unit running empty from Crewe to Liverpool Lime Street overran a red signal on the slow line and stopped in the path of the 06:15 London Euston to Glasgow Central Virgin Trains express, hauled by a Class 87 electric locomotive.[13] The impact, which wrote the unit off, severed the Pacer's body from its frames, causing severe internal damage, raising the question of whether Pacers are crashworthy.[14]

On 11 June 2009, a Class 142 (Class 142042) operated by Northern Rail derailed while on route from Blackpool to Liverpool. All 40 passengers on board escaped serious injury, but one person was taken to hospital with minor injuries. An investigation is currently being carried out, but it has been suspected that a major problem with the engine occurred as passengers saw large parts of it on the track. Problems with engines on 142s have been experienced before.[15]

The ensuing report recommended that they be withdrawn and replaced in the near future with heavier, more sturdy Sprinters.[citation needed] However, as there are no spare Sprinters available, only 142008 and 142059 have been withdrawn, both through accident damage. 142059 was withdrawn in 1990 after colliding with a buffer stop at Liverpool Lime Street. The train had run away down the hill from Edge Hill whilst returning with brake problems. The train was running without passengers at the time and the driver and guard both survived the accident without serious lasting injury. The platforms were evacuated in time before the train struck the buffers.

John Pugh, the Liberal Democrat MP for Southport, has described the 142 trains as "unsafe". However the UK Government's Transport Secretary Geoff Hoon denied this claim saying, "I would not accept that any of that rolling stock is unsafe", and that they constantly upgrade them. MP John Pugh added that these trains were exacerbating the overcrowding situation due to the lack of seating and space on board them. He is continuing to work to try to get the trains replaced, especially as passenger numbers are expected to increase in the next few years.[16][17]

A cardan shaft failure led to an incident at Durham on 10 April 2011, injuring a member of the public with a piece of ballast kicked up by the detached shaft.[18]