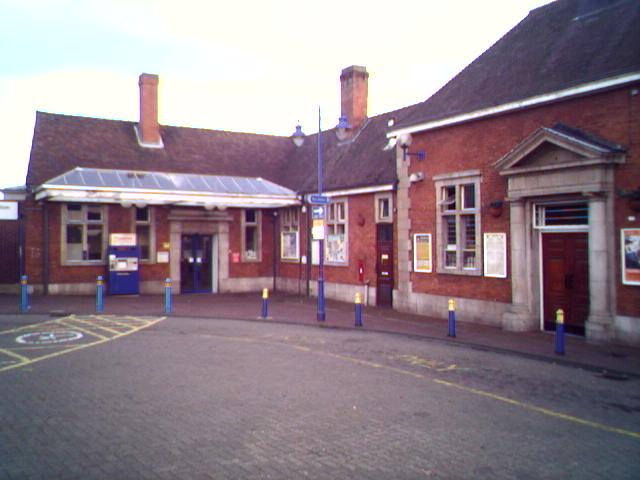 Aylesbury railway station is the only in , , . It is the present terminus of the from via . A branch line from , on the line from Marylebone to Birmingham via High Wycombe, also reaches the station.

The first station on the site was first opened in 1863 by the Wycombe Railway (later GWR). In 1868 the Aylesbury & Buckingham Railway (later ) connected to Aylesbury. The connected from in 1892, in which the station was rebuilt. The Great Central Railway connected to Aylesbury in 1899 from Annesley Junction just north of Nottingham on their 'London Extension' line to . The current station buildings date from 1926 when the station was again extensively rebuilt by the . Until nationalisation in 1948, Aylesbury was a joint station operated by the and the .

Until 1966, Aylesbury was an intermediate station on the former main line from to Sheffield Victoria and on to Manchester via the . Aylesbury was also on the (later ) and through trains from Baker Street to Verney Junction operated until 1936. From 1948 to 1961 Aylesbury was the terminus of the Met's mainline in which trains had to change from electric to steam locomotives at Rickmansworth. Following electrification from Rickmansworth to Amersham, Aylesbury was no longer served by London Underground trains. From the 1960s until the 1980s, passenger trains at Aylesbury were almost exclusively operated by diesel multiple units.

By the 1980s, the lines serving Aylesbury were in a poor state. Aylesbury station itself was run down and needed a facelift. decided to revamp the lines out of Marylebone, and Aylesbury was refurbished with the addition of a new waiting room, new toilets and better lighting. Platform 4 was closed and the car park was extended. A new driver's staff room on platform 3 and a new heavy maintenance depot was built just north of the station. Aylesbury became the headquarters of the operational side of the Chiltern Line. ("For more information, see: Chiltern Line Modernisation")

The station is laid out for through traffic, but waste freight trains to the site at Calvert are the only regular services further north. On selected days, usually bank holidays, special passenger services run to the at Quainton Road station. In addition there is a major repair and maintenance depot just north of the station, and several sidings.

There are three platforms. Platform 3 gives access to Amersham and London Marylebone only, whilst platform 1 only gives access to Princes Risborough and London Marylebone via only. Platform 2 can serve both routes. There used to be a bay platform (platform 4) and several freight sidings but the car park now lies on the trackbed and bike racks occupies the platform. The goods depot was to the west of the station and was demolished in the 1960s. Modern apartments now occupy the site.

The station is managed by and has recently been fitted with Automatic Ticket Gates. There are two FastTicket self-service ticket machines accepting cash and cards, a PERTIS and two ticket windows. There is a taxi rank outside the station. From 21 January 2008, the taxi rank has moved to the car park for 52 weeks as a result of major engineering work on the new Southcout Bridge and the new Station Boulevard.

Aylesbury is home to no fewer than seven First Generation DMUs built in the early 1960sfact|date= August 2008. These units are jointly used by Chiltern Railways and for route learning and sandite duties. One unit is used solely for passenger services to/from Princes Risborough.

A rail scheme is proposed [cite web
url=http://www.buckscc.gov.uk/transport_plan/LTP2/thirty_yr_vision.htm
title=Local Transport Plan 2: 2006 - 2011
date=2005-08-22
accessdate=2008-07-28
publisher=Buckinghamshire County Council] to extend passenger services northwestwards to a new station &mdash; &mdash; sited on the present freight-only line towards Quainton at the point where the line crosses the A41 near Berryfields Farm. This area is to be known as the Berryfields Major Development Area, and will include Park and Ride facilities for Aylesbury. A further expansion of rail services to Bletchley and Bedford is suggested in a consultants' report [cite web
url=http://www.southeast-ra.gov.uk/southeastplan/key/study_areas/draft_strategies/mkav/aylesbury_vale-draft_strategy.pdf
title=AYLESBURY VALE 2026 - ADVICE ON SUBMISSIONS TO THE REVIEW OF RPG9
date=October 2004
accessdate=2008-07-24
publisher=Buckinghamshire County Council] written to provide regional planning guidance to Bucks County Council concerning the development of Aylesbury Vale.

As part of the plans to restore the , these services could be extended to terminate at Milton Keynes via Bletchley.

Aylesbury may also feature in the project which envisages re-routing part of the to Watford Junction; proposals also exist to start direct rail services between Watford Junction and Aylesbury via Rickmansworth and Amersham.

Train services to London are usually via Amersham on the . In addition to this, travellers also have the option of going to Princes Risborough, and changing to a service on the (although this results in a longer journey time). However, on late nights and Sundays, some services run direct to Marylebone via the Princes Risborough and Chiltern Main Line route, without the need to change.

At peak times, there are up to five trains per hour towards London in the morning, and returning from London in the evening. Some of these are express services, which skip the stops shared with the Metropolitan Line nearer to London. The typical service pattern is as follows:

Aylesbury bus station is a two minute walk from the station. Buses depart to several destinations across Buckinghamshire, including Stoke Mandeville Hospital, Milton Keynes, Oxford and Leighton Buzzard. Bus departure times are displayed on screens outside the rail station's departure lounge as well as at the bus station itself.